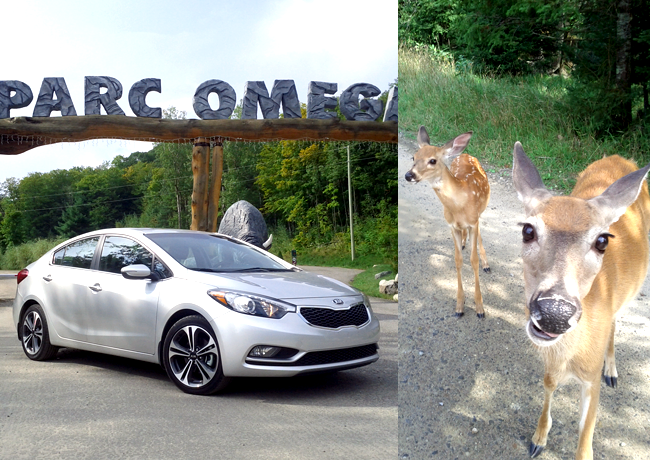 Writer Travis Persaud hits the Quebec road with his wife, a 2014 Kia Forte SX, and way too many animals. The animals surround our vehicle.

We don’t panic. Nor do we speed up. We take our time. Driving as slowly as possible. They want to see our car. Well, sort of.

My wife and I are piloting the 2014 Kia Forte SX. Completely redesigned as it begins its second generation, the new Forte is a step up from the outgoing model just on first impressions alone.

The front-end takes on a similar feel to the Kia Optima, its gorgeous older brother. Sharp scoops on its side combine with 17-inch alloy wheels for an eye-catching look. And its lower, longer, and wider body from the previous generation give it a sleek, sporty appearance.

The deer come perilously close to the 2014 Forte, unafraid, peeking into the car. The bears and wolves follow. The bison inch forward. We finally push the button to roll down the front windows and start handing out carrots to the deer. A number of open mouths push their way into the car. Our guide steps out and starts throwing pieces of meat to the wolves. Everyone is content.

We are driving through Parc Omega in Montebello, Quebec. The Jurassic Park-esque area, less than an hour east from Ottawa, provides an incredible opportunity to see these animals in the (tamed) wild. My wife and I are in some form of awe and excitement as we watch them roam freely. We took a combination of highway and city roads to get here from the capital, with the Forte registering a respectable 7.8 L/100 km — indicative of my full week in the car. A 2.0L four-cylinder engine with 173 HP sits under the hood of the 2014 Forte SX, the highest trim level, replacing the base 1.8L four-cylinder engine that pushes 143 HP. The SX trim starts at $26,195, which is a monster leap from the Forte’s starting price of $15,995 for the LX. But, like most starting prices, it’s all smoke and mirrors. Most people will jump to the mid EX trim ($20,695) for a few extra features, or take the plethora of amenities that come in the SX.

the new Forte is a step up from the outgoing model just on first impressions alone.[/quote]

Cooled driver seat (perfect for this hot day puttering around Parc Omega); heated front and rear seats; heated steering wheel; alloy pedals; sunroof; paddle shifters; rear view camera. The list of features in the 2014 Kia Forte SX goes on and on — I’ve driven vehicles twice as expensive that don’t have nearly as many. Kia delivers bang for your buck in a supremely attractive package.

Perhaps too attractive. I felt as if it were missing 15 to 20 HP as I tried to overpass vehicles on Highway 50, as we drove to Montebello. Power lags, just a bit, and it is sluggish moving up inclines. It’s the curse of looking so good — I just expected it would move as if it were a 3-Series because of its sporty appearance. Place your expectations to meet its segment — think Honda Civic, Hyundai Elantra, Mazda3 — and you won’t experience this momentary blip of disappointment.

The 2014 Kia Forte SX excels, and apparently the animals agree.

For more info on the 2014 Kia Forte SX visit here.

Travis Persaudhttp://travispersaud.com/
Travis Persaud has contributed to a number of magazines across North America, including enRoute and Exclaim! He loves variety and it shows in the wide range of topics he’s covered: automotive to music, technology to travel, beer to real estate. He’s currently the editor of WHERE Ottawa (city travel guide), beer columnist for Ottawa Magazine, a frequent contributor to CAA Magazine and the former associate editor of Zoomer Magazine. Travis is also a member of the Automobile Journalists Association of Canada.