American Motorsports: Visiting the World of Speed Museum In Oregon 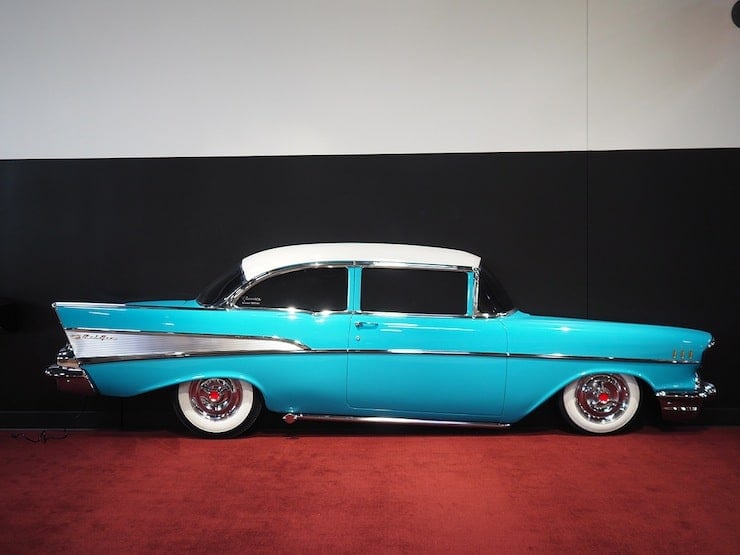 Motorsports fans rejoice. The Pacific Northwest is home to the brand new World of Speed museum in Wilsonville, Oregon.

About a 30-minute drive south of Portland, there you will find an 82,000 square-foot complex  — fittingly situated at the site of what was once a massive Dodge dealership — dedicated to machines that go fast, whether they have wheels, rudders, wings or all of the above.

“The World of Speed is a motorsport museum that’s designed to educate and celebrate motorsports, specifically aimed at teaching the next generation of kids automotive and mechanical skills,” says education director John Amschler.

“So it’s a full on shop program built inside of a motorsports museum that will cover everything from boats to land speed record cars to drag racing, sports cars, stock cars. We have something that will appeal to everyone here.

Opening last month on April 24, Katie Schoen, vice president of boutique agency Lawrence Public Relations that is representing the WOS, says it is the brainchild of local Oregonian couple and businesspeople Sally and David Bany.

“The founders have always had a passion for cars — they were high school sweethearts but their first date was at Sidewinders (old Portland motorcycle track),” says Schoen, adding passion soon turned into a hobby of collecting vehicles of all sorts. “People have told them, ‘You guys should start a museum,’ and so it started from that and evolved.”

When you enter through the front doors at WOS, the size of the facility really makes an impression because much of the display area is in one giant room, as opposed to being sectioned off. Guests begin the tour underneath a racetrack-inspired “Start” banner and walk past a row of classic muscle cars and hot rods, like a restored 1965 Ford Shelby GT 350 with 3,00 original miles, accompanied by signage explaining their significance.

The purpose of WOS is certainly to entertain, but Amschler points out the founders wanted to pass on interest and knowledge of the industry to youngsters, which is why many of the exhibits contain a hands-on component. A part of the building has also been turned into a workspace complete with functional lifts and an assortment of tools.

“We have three racecar simulators that are built on real racecars, so these aren’t shells or video games. How often do you get a chance to sit in a Winston Cup car, much less drive it? This is the 1998 Johnny Benson’s car he drove in Winston Cup — all the buttons and switches in it work. It’s a completely immersive experience. The next one over is Adrián Fernández’s ‘95 Indy Car and it drove out of PIR (Portland International Raceway). It drove in the Indianapolis 500 and it’s a real racecar that’s been turned into a simulator. And as far as we know, these are one of a kind,” he says. Going into full educator mode for a second, the affable Amschler gives a bit of a history lesson as we stand in front of a recreation of the inside of a typical 1940s garage. Hanging from the ceiling is a model of the P-38 Lightning fighter plane made famous during World War II, and he says is what provided several styling cues for the 1948 Cadillac (think tailfins).

Make sure you don’t leave the museum without checking out one of its most visually arresting displays. In the corner are four NASCAR vehicles used in the Daytona 500 between 1974 and 2000, including Dale Earnhardt Jr.’s Chevrolet Impala, suspended four-and-a-half metres above ground on a piece of replicated track matching the actual incline of the oval speedway. Other things to do on the Oregon Trail:

Particularly due to its proximity to Western Canada, Oregon State is a popular weekend destination for a lot of Canadians. The trip is particularly appealing if you own an electric car, because of the West Coast Electric Highway that features Level 2 (and even a few Tesla-built DC Supercharger) charging stations dotting US Interstate 5 from Washington all the way to California.

I hopped in a rented Nissan Leaf and found no shortage of stations along the drive from Portland to WOS, including free stations inside the parking lot. Note that some of the chargers are operated by Blink, owned by the Car Charging Group, and you need to sign up for an account at www.blinknetwork.com before first use.

A real Oregon success story is that of the McMenamin’s. In 1974, brothers Mike and Brian opened their first pub. Fast-forward to 2015, and the two now own over 60 eponymous businesses, often running out of historic properties such as a former pioneer homestead (Edgefield) and saloon (White Eagle). While not a renovated character building, there is a McMenamins Sherwood (15976 SW Tualatin Sherwood Rd.) neighbourhood watering hole just a hop skip away from the museum.

What goes together better than cars and coffee? Once you’re back in town, stop by Nossa Familia Coffee (1319 NW Johnson St.), a roastery and espresso bar in the Pearl District. Also started up in 2004, their beans are sourced directly from CEO Augusto Carneiro’s 125-year-old family farm in Brazil. On Tuesday afternoons, they offer a free public coffee cupping class at 12:30 p.m.

To say there is a food cart scene is Portland is like calling a Formula One car quick. Among the hundreds of portable restaurants serving meals on wheels, one of the local favourites is Lardo (1205 SW Washington St.) Sandwiches are their claim to fame, for example the $9 Pork Meatball Bahn Mi, which is a slightly different take on the Vietnamese sub. Lardo has become so popular that the original food cart spawned more than one brick and mortar location.

For the full city experience, book a stay in downtown Portland at Hotel Rose (50 SW Morrison St.) Easily recognizable by its distinctive bright yellow exterior and floral motif, the 140-room, dog-friendly establishment is within easy walking distance to almost all of the city’s major amenities. There’s an on-site restaurant/bar, 24-hour fitness room, free Wi-Fi, free coffee and house-made pineapple cupcakes. And to really get relaxed, go for stroll along the serene Willamette River, right outside the hotel’s doorstep.

Visit here for more on the World of Speed.

Benjamin Yonghttps://benjamin-yong.com/
Benjamin Yong is a freelance writer and member of the Automobile Journalists Association of Canada. You can find his stories on this site and in other publications including RPM Canada, Westworld BC, CAA Magazine and Darpan Magazine.
FILED UNDER:
CultureCulture Features

COVID-19 pandemic may be halting progress but research & development on the Mustang Mach-E must go on. Here's how 3 Ford engineers are doing it - from home.
Read more
Culture

The 2021 Ford Bronco is almost here - time to start thinking about accessories. These 5 Bronco 'Adventure Concepts' revealed by Ford should get you started.
Read more
Ford Explorer