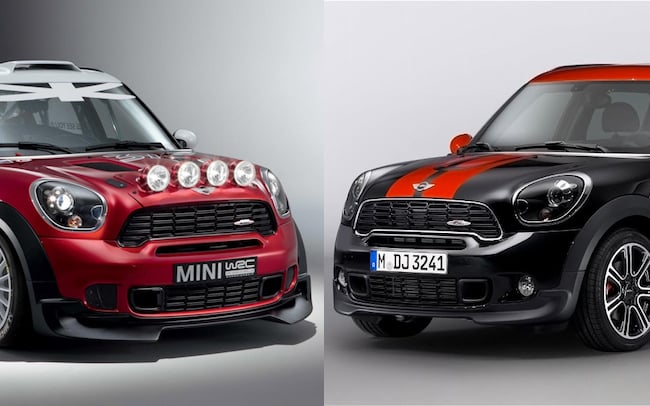 Sure, the 2013 Mini WRC would leave the 2013 Mini JCW Countryman All4 in its wake on any type of road surface but with some minor tweaks, few would be the wiser

Kühtai, Austria — There are a number of specific reasons why a car manufacturer chooses to get involved in motorsports, but ultimately it all comes back to selling more cars. Over the years, BMW has shown a very cold and calculating approach to their participation, which makes sense from a business perspective, but has the capacity to leave hardcore fans a bit miffed.

When the company acquired the Mini brand in 1994, they also took control of a car with a rich racing history, particularly in rallying. The popular little car captured the win at the Monte Carlo Rally in 1964, 1965 and 1967, with disqualification due to a minor technical infraction causing the one miss during this streak.

It took some time for the handlers at BMW to pull the trigger, but the new Mini did finally return to the rally scene in 2011, was briefly run as a factory-funded effort last year and has since been made available to customer teams through the support of Prodrive, the outfit that used to run the factory Subaru WRC effort. The reason: In the Mini Countryman, they finally have a vehicle with which to showcase their off-road readiness. All models in the Mini fleet are based on a front-wheel drive layout and the crossover variant is no different—the difference is that the Countryman is the first Mini available with an all-wheel drive system, dubbed All4. Said system is an on-demand set-up that automatically redistributes torque as conditions warrant. The system incorporates a centre differential that sends torque to the rear wheels and a rear differential with integrated electro-hydraulic clutch to manage the torque split. Under normal traction conditions, 100% of the torque is sent to the front wheels; in slick conditions, up to 50% can be redirected to the back, giving the Countryman a fairly predictable attitude in the ice and snow. Although the torque is split evenly, the Mini displays a tendency to oversteer when pushed in low traction conditions. This is due to weight distribution: With 59% of the heft balanced over the front axle of the Countryman, the tail is comparably light and relatively easy to swing out of line, as I discovered at a winter driving event held in the Austrian Alps. The event was designed to give a proper showing of the vehicle’s prowess under less than perfect conditions and to introduce a prototype of a forthcoming model, the 2013 Mini John Cooper Works Countryman All4.

The JCW Countryman works with the identical all-wheel drive system as its lower-powered compatriots, so there’s nothing new to report there. But there are enough changes to warrant some attention from serious driving enthusiasts—and some similarities to a new Mini rally car purpose-built for the modern era.

First off, although the engineers shied away from revealing exact figures, we can expect that the JCW Countryman All4 will have enough horsepower and torque to justify the badge. In the other Mini JCW models, the 1.6-litre turbocharged 4-cylinder develops 208 hp and 192 lb-ft of torque. Insiders suggested that the engine in the JCW Countryman will receive/has received some additional boost to compensate for the vehicle’s added weight.

Without question, during a test drive of the prototype that ran past a number of Tyrolean villages, weight did not seem to be a factor at all. In fact, the JCW Countryman fairly jumped out of the corners and sprinted off effortlessly, the combination of the added power, increased torque and well-sorted all-wheel drive system making very light work of the snow-covered roads. (Roads, it must be noted, that were giving other vehicles all sorts of trouble.)

Still, the road-going JCW Countryman would be no match for the Mini WRC (World Rally Championship) car, which possesses more power and a different all-wheel drive system. When Mini returned to rally competition in 2011, they made an immediate impact, to the surprise of more than a few observers. The two-car team competed in six events and scored their best finish, second at the Rallye de France Alsace, with Dani Sordo behind the wheel. In 2012, the team planned to compete in the full championship, starting with the (entirely appropriate) Monte Carlo Rally on January 18-22, before those plans were derailed for reasons that are not completely clear. (Read: It has to do with finances.)

The Mini WRC was developed to meet the FIA Super 2000 regulations, which were designed to attract more manufacturers by making the homologation process simpler and less expensive. One of the rules dictates that rally cars can run at a minimum weight of 1,200 kg—this alone gives the Mini WRC an advantage over the JCW Countryman All4, which tips the scales at 1,455 kg.

There are other differences: Although the Mini WRC works with the same engine, a Garrett turbocharger capable of up to 2.5 bar of boost has been attached; the turbo on the JCW Countryman, on the other hand, will likely be set to a maximum of 1.3 bar. This change has made a big difference in terms of output—the WRC car develops, at minimum, 310 horsepower and 310 lb-ft of torque. Per the Super 2000 rules, the Mini WRC also features a racing clutch and a 6-speed sequential gearbox from preferred supplier Xtrac.

In addition, as the rally car will be going off-road far more frequently than the production version, the Mini WRC is equipped with permanent all-wheel drive rather than an on-demand system, and features a limited-slip differential at the front and back. (If the Mini is similar to other pro rally cars, the torque distribution is likely infinitely adjustable via the driver’s seat.)

Long story short, the 2013 Mini WRC would leave the 2013 Mini JCW Countryman All4 in its wake on any type of road surface and under any conditions. But if you strip out the production car’s interior, toss in a roll cage, apply some cool decals and a few other accoutrements, few would be the wiser. 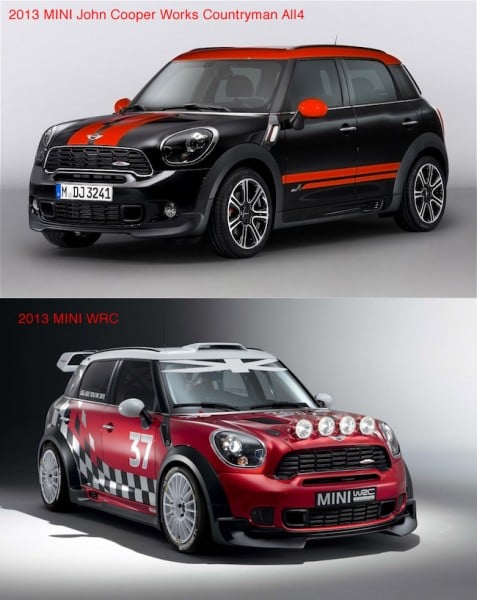 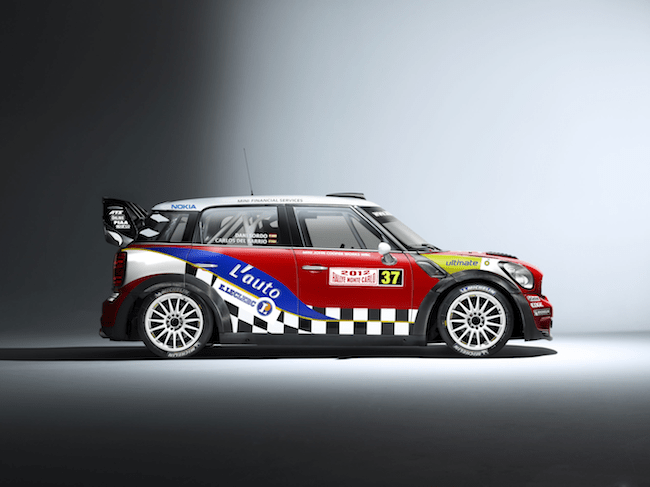 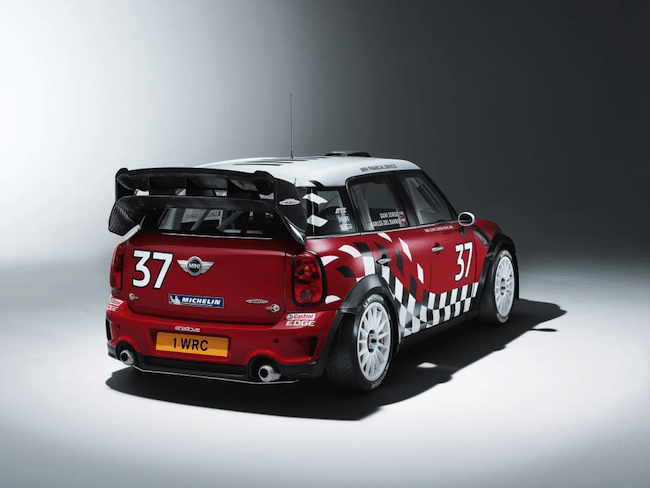 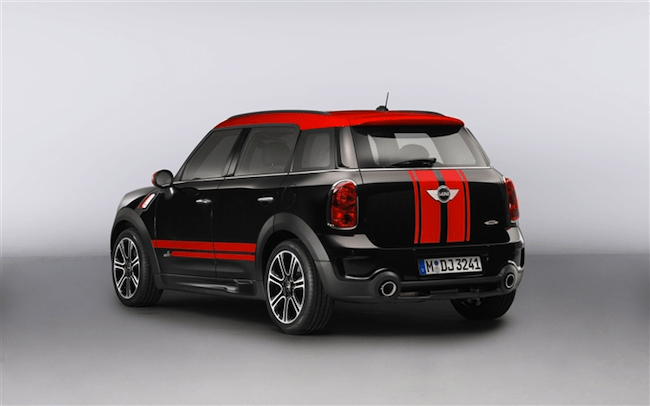 Mark Hackinghttp://www.markhacking.com/
Mark Hacking is an award-winning car, motorcycle and motorsports journalist whose work has appeared in Azure, enRoute, Intersection, NUVO and Toro, among many others. He is the former editor of Performance Racing News, the former managing editor of DRIVEN, and a member of both the Automobile Journalists Association of Canada and the Motor Press Guild of California. An avid racer, Mark is a three-time podium finisher at Targa Newfoundland and, this past season, raced in the VLN Series at the Nürburgring with the factory Aston Martin team. His motto in life: Drive fast, take chances.
FILED UNDER:
New CarsCar ReviewsMINI ReviewsMINI Cooper ReviewsAuto NewsMINI News

When the chance to review a Cooper SD performance diesel model arose - unavailable in North America - we went for it.
Read more
2018 SUV and Crossover Reviews

Here's a closer look & full review of the new 2018 Stelvio Ti - the mid-range offering of the mid-size sport SUV. But is 280 horsepower enough to compete?
Read more
Convertible Reviews

The most powerful of the Mini Clubman bunch, we get behind the wheel of the 228-hp 2017 Clubman JCW All4 model.
Read more
Alfa Romeo

We review the 2017 BMW 540i and conclude this mid-range model is closer to luxury cruiser than a true sport sedan. But we're not complaining.
Read more
2017 SUV and Crossover Reviews

Unlike some competitors, the 2017 Mercedes-Benz GLC 300 Coupe is indeed a sporty mid-size SUV with fastback looks and performance to match.
Read more
Car Reviews

The 2017 Toyota Tundra CrewMax SR5 with TRD Pro Package is a hefty pickup with a price tag to match. Does it compare to the domestic trucks?
Read more
2017 SUV and Crossover Reviews

When is a Volkswagen really a Porsche? Technically never, but you can get close in a vehicle like the 2017 Volkswagen Touareg we suspect has irked Porsche dealers for a long time.
Read more
Audi