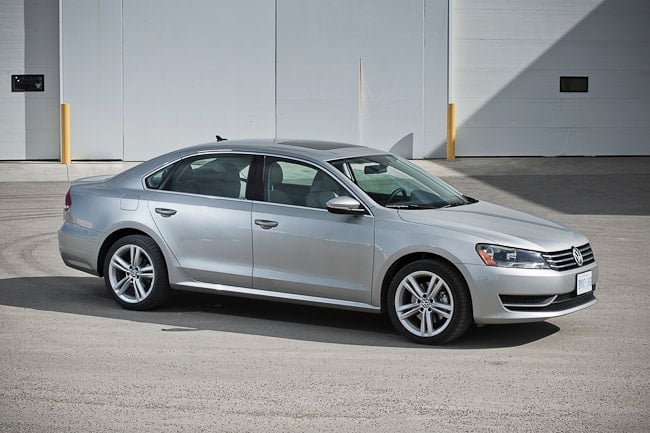 Putting the “People’s Car” back into Volkswagen – we review the 2012 Volkswagen Passat with the 2.5L powerplant

Offered at a reasonably low price-point, the 2012 Volkswagen Passat is incredibly refined both inside and out. Not to mention, remarkably refined on the road, with handling and ride comfort rivaling sedans twice the price. Things were not always so modest for the Passat. I recall, just a few years ago, the VW Passat selling for nearly $8000 more at the starting point. Same goes for the Jetta, such as ours, we paid well over $30,000 for the 2006 Jetta 2.0T. Today, both models can be had for much less, nearly half the price, with the Passat starting at under $20,000 (yes, that’s the number 2). Volkswagen has struck the balance producing an affordable Passat sedan without compromising too much; retaining the Passat’s premium vibe (i.e. quality materials found throughout the cabin with excellent fit, finish, and craftsmanship). A vehicular detoxification, if you will, rendering a refreshed and streamlined 2012 Volkswagen Passat sedan at a price we can all afford…particularly, young, growing families. My 2.5L was impressively quick, both at the traffic lights and in the higher RPM range—overall, offering more power than what you might be expecting. And, when you’re hauling a family the added power can be a true asset, particularly on the highways where passing acceleration is important. Competitors for the 2012 VW Passat 2.5L include the Toyota Camry L, Nissan Altima Sedan 2.5, and Honda Accord Sedan LX. All priced within $2000 with the Passat coming in the lowest.

The 2020 Volkswagen Atlas Cross Sport isn’t as sporty as VW wants you to believe. Or is it? We review the new midsize 5-passenger SUV and break it down.
Read more
BMW