A sporty hatch with 292 horsepower. 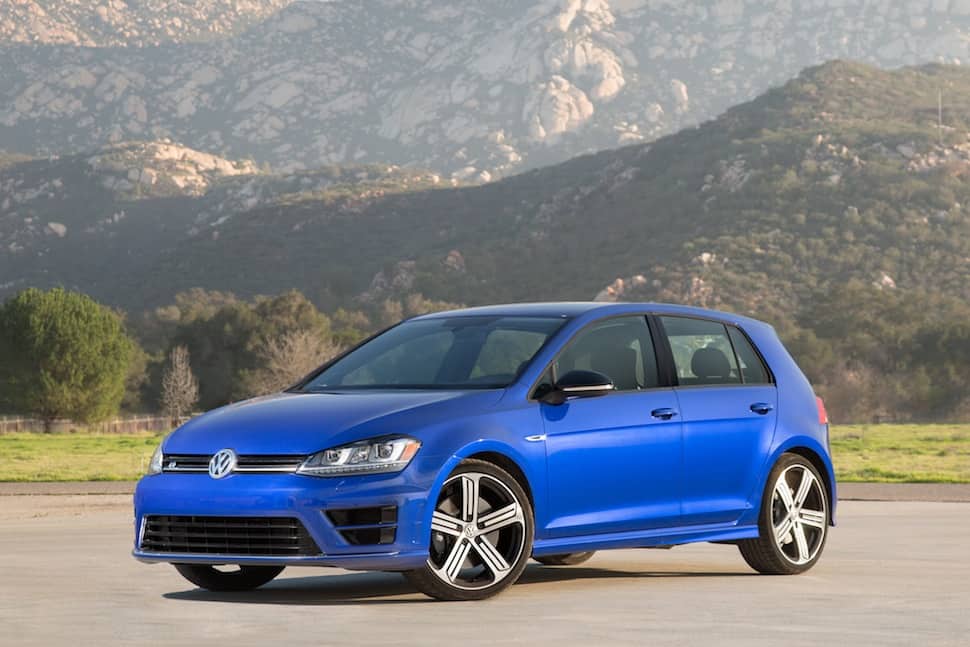 In North America, hatchbacks and station wagons are considered the automotive equivalent of a fanny pack: practical as anything, anything but stylish. Still, enough people here want them to warrant automakers selling them, albeit under names conceived to conceal their practical natures: Mazda3 Sport (hatchback) and BMW 3 Series Touring (wagon) are a couple of the better examples.

Despite all that, hatchbacks in particular carry a certain cachet in enthusiast circles, especially compared to sedans: Ford has its sporty Fiesta and Focus ST variants (both offered only in hatchback body styles), Fiat has the 500 Abarth, and Mini’s Cooper line includes the super-quick JCW variant.

Volkswagen created the “hot hatch” vehicle category in the 1970s with its original GTI. The hatch got even hotter in 2004 with the introduction of the Golf R32, a car that evolved into the Golf R. VW introduced the second generation of the R late last year as a 2016 model.

These days, the Golf R’s 292 hp doesn’t sound as impressive as it once did (most minivans and family sedans boast nearly that much), but as with other German automakers, Volkswagen has a way of making that much juice feel more potent than it looks on paper. More impressive is that VW squeezes that power from the same 2.0L turbocharged four-cylinder engine that generates just 210 hp in the standard GTI.

It’s not for nothing that the Golf R gets the benefit of four-wheel traction, making for more efficient power delivery on any road surface. Power through a sweeping turn, and you’ll feel the all-wheel drive setup routing power to the rear axle to help steer the car through the curve. The cherry on top is the way AWD makes this car one you’d be silly not to want to drive in winter: the combo of grip and power makes the car feel unbeatable in snow. I’m also pleased to report that the stability control system can be completely disabled, allowing on-demand tail-out fun in deserted, snow-covered parking lots.

In the past, the Golf R was offered only with a manual transmission. A six-speed stick is still standard spec, but this latest iteration is the first with the option of VW’s excellent DSG dual-clutch automatic. Initially, we were happy our tester had the stick, but as the week went on we began to wonder whether the DSG might be the better choice: when you’re in a hurry, it bangs off unbelievably quick upshifts and seamless rev-matched downshifts, and allows full manual control, but when the time comes to slow down, it’s a flawless partner in relaxed driving.

The DSG is also subject to VW’s selectable drive modes, which otherwise works on throttle response, power steering assist, and suspension firmness to tailor the car’s performance to the situation at hand. Commuting to work? Go for the comfort setting, which sets up a gentler throttle tip-in and softens the ride. When track day comes, a race option offers right-now drivetrain responses and a hard ride that helps sharpen the car’s cornering abilities.

With the manual transmission, we found comfort mode made the car most conducive to smooth launches in city driving; sport and race modes made it feel twitchy in stop-and-go driving.

Regardless of mode, the Golf R is almost frighteningly quick in full-throttle launches, thanks to the combination of 280 lb-ft of torque — most of which is available from below 2,000 rpm — and all that all-wheel grip. That torque also means that at highway speeds (where the engine spins around 2,000 rpm in sixth gear at 100 km/h), there’s passing power available without the need for a downshift.

Inside the 2016 Golf R hatchback

Inside, Golf R gets heavily bolstered front seats (among the few interior clues this is anything but a standard Golf) that slim-hipped people will declare comfortable and others may find annoying. Otherwise, there’s the same roomy rear seat and cargo area as you get in any Golf model.

Pricing for the standard GTI ranges from $28,600 for the plenty-of-fun basic three-door model to $39,500 for a five-door model with the DSG transmission and dressed up in Performance trim. We’ve driven that priciest variant and found that its upgrades — bigger brakes, grippy summer tires, locking front differential, and a 10-hp bonus (for 220) — are compelling arguments for blowing an extra $11,000, but the GTI Performance looks way overpriced next to the Golf R which, when optioned with the DSG, carries a price not even $2,000 more than that top-end GTI.

That sounds like a great bargain for a hot hatch with nothing to hide behind fancy adjectives.

Chris Chasehttps://chrischasescars.com/
Chris has been writing professionally about cars since 2004, in print and online. He lives in Ottawa with his wife and two feline tyrants. In rare quiet moments, he can be found travelling or playing one of his way-too-many guitars. Chris is also a journalist member of the Automobile Journalists Association of Canada (AJAC).
FILED UNDER:
Compact SedansVW Golf Reviews & News