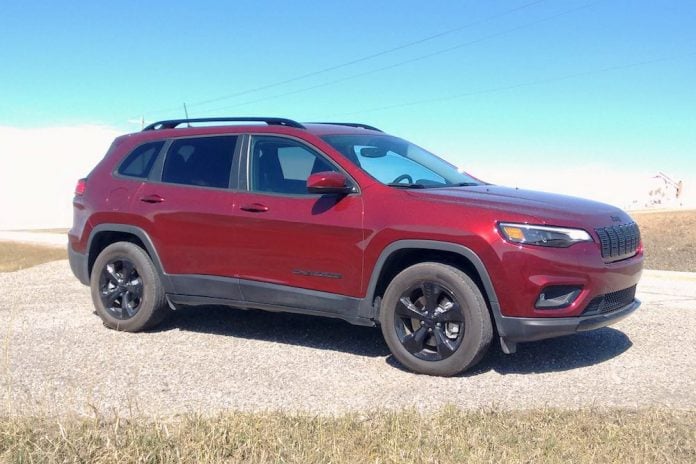 The current, KL-generation of Jeep Cherokee has been a crossover SUV success since it went on sale in 2013 as a 2014 model. Jeep has considerably reworked its midsize vehicle for the 2019 model year, introducing an optional 2-litre turbo engine, revised styling, additional cargo space, a more efficient 4WD system and the latest Uconnect infotainment system.

We tested a Cherokee North 4×4 (C$38,240 inclusive of a C$1,895 destination charge), which sits one from the bottom in a five-model Canadian lineup that starts with the FWD Sport (C$32,240 inclusive) and finishes with the Overland 4×4 (C$48,340 inclusive). However, at the time of writing, FCA Canada was offering a discount of at least 10% across the range.

In the US, the Latitude and Latitude Plus replace the Sport and North at the bottom of another five-model range. It begins with the FWD Latitude for US$26,985 (inclusive of a US$1,495 destination charge) and rises through to the plushest Trailhawk Elite 4×4 (US$38,635 inclusive).

If you’re looking at the 2019 Cherokee Limited, check out our review here.

Putting the 2019 Cherokee Latitude / Cherokee North to the test

It never bothered us, but apparently the front end of the 2014 Cherokee was deemed insufficiently Jeep-like by some, so it’s been ditched on the 2019 model. The headlamps are still horizontal in design but chunkier than before, and now come with Bi-LED projector headlamps. The vertical-barred grille has also been tweaked.

There are new light clusters at the rear, too, and the license plate has been raised onto the liftgate, which is now available with power operation.

Our test vehicle was finished in Velvet Red Pearl paint (C$100) and had the Altitude Package (C$895), which means that the exterior trim and 18in alloy wheels are finished in gloss black. The overall effect was a little dark, and we feel that the Cherokee looks better in lighter colours.

FCA’s interior designers have excelled themselves of late on vehicles like the new Ram 1500 and Jeep Wrangler. There are some nice interiors on the updated Cherokee, too, but particularly when it comes to the instrument panel, you must climb higher up the range than our North test vehicle to find them.

Interior black trim is another part of that Altitude Package but here it only serves to darken the already dark mood, unfortunately. The area around the 7in central screen (the Sport’s is only 5in) is especially unattractive, featuring wide areas of dull black plastic where higher-end Cherokees have the combination of an 8.4in screen and additional pushbuttons for ADAS systems to relieve the gloom.

The bigger screen is standard on the Limited grade and up in Canada; note however that tech such as park assist and lane departure warning is only ever an option, even on top-end Cherokees.

More generally, there are some nice-feeling materials used in the trim, but they’re not always matched by the build quality. Pieces of the door trim and our test car’s center console weren’t as well screwed down as we would have liked.

More irritating however was the hissing HVAC, which also failed to cool the car properly when it had been sat in the sun on a cold day. Perhaps there was an issue with that particular vehicle, but we’d recommend trying the system out during a test drive.

On the plus side, FCA’s latest Uconnect 4 infotainment system is one of the best around. The touchscreen has pinch-and-zoom capability and even here in the relatively modest North grade, there are good connectivity options with standard Apple CarPlay and Android Auto.

The driving position is good and there are no problems with visibility, but we weren’t convinced by the comfort of the front seats, which have a slightly squishy, memory-foam-like feel to the squab.

Rear-seat accommodation is ample for a small family. The cargo space of the 2019 Cherokee has been widened by 8cm (3in) and now totals more than 764 litres (27 cu.ft.) with the sliding rear seat at mid-travel.

The 2-litre turbocharged I4 engine is a C$2,590/US$2,245 option, available on North and higher in Canada, or Altitude and higher in the US. It’s a major addition to the Cherokee lineup, providing a sophisticated and distinctly European-feeling alternative to the Cherokee’s more conventional engine options – a standard, 2.4-litre Tigershark MultiAir or the smooth, 3.2-litre Pentastar V6 (C$1,695/US$1,745).

The 2-litre is another version of the motor seen in the Alfa Romeo Stelvio SUV and Giulia sedan, and there’s certainly an appealing, Alfa-like exhaust rasp at high revs. At everyday speeds the note is more of a buzz, which isn’t as desirable.

Like all Cherokee engines, it comes with stop-start and is paired with a 9-speed automatic transmission. We weren’t completely convinced by the calibration, which left us off-boost a couple of times pulling out of a corner at low speed.

We were impressed by its stability under hard braking, but overall there’s little in the driving experience to distinguish the Cherokee from the SUV crowd.

Off-road in the Cherokee

There are three different 4WD systems available across the Cherokee range. Our car had the basic Jeep Active Drive I, which features a new, automatic rear drive module that saves 7.7kg (17 lb) of weight over the previous version and has less drag at low speeds, which saves on fuel.

The previous two paragraphs are enough to tell you that Jeep continues to take the off-road performance of its vehicles very seriously, despite the fact that most Cherokees will spend their lives in the city.

We didn’t get to take the North off-road this time, but we did take a 2019 Trailhawk through a challenging forest course at a Canadian Car of the Year judging event last year. It barely broke sweat and showed up a couple of segment rivals for the amateur off-roaders that most crossover SUVs really are.

Back on the road, the Cherokee is less exceptional. The ride comfort and handling are acceptable and it’s not especially noisy, but there’s not the same engagement that you’d get from a Ford or a Mazda.

We were impressed by its stability under hard braking, but overall there’s little in the driving experience to distinguish the Cherokee from the SUV crowd.

Takeaway: should you buy a new Cherokee Latitude / North?

If you plan on regularly taking your crossover SUV off-road, then the 2019 Jeep Cherokee should be at the top of your list, likewise if you like the idea of a Wrangler but want something a little more car-like for everyday driving.

For everyone else, we suggest paying careful attention to specifications. Outside, the Cherokee can be made to look more distinctive, or less, depending on the colour and trim options you choose.

Under the hood, the new turbo engine option offers something different to the North American norm, albeit at a price.

But more than anything, the range of interior trim levels give the cabin a completely different feel, depending on the Cherokee model you choose. We weren’t blown away by the look and feel of the North’s interior, but we know that there are some much more attractive options further up the range.

Jacked up and ready to rock, this 2016 Jeep 4x4 off-roader by designer Igor Dmytrenko is built for action. Now, let's get Jeep to actually build one.
Read more
Motorcycles

Polaris’ three-wheeled autocycle gets its biggest update for 2020 since hitting the streets five years ago. A 25-hp increase, lighter, and improved cabin.
Read more
Adventure Vehicles

From badass camper vans & oldschool SUVs to modified pickups & adventure motorcycles, here are 30 of the best off-road vehicles we came across in 2019.
Read more