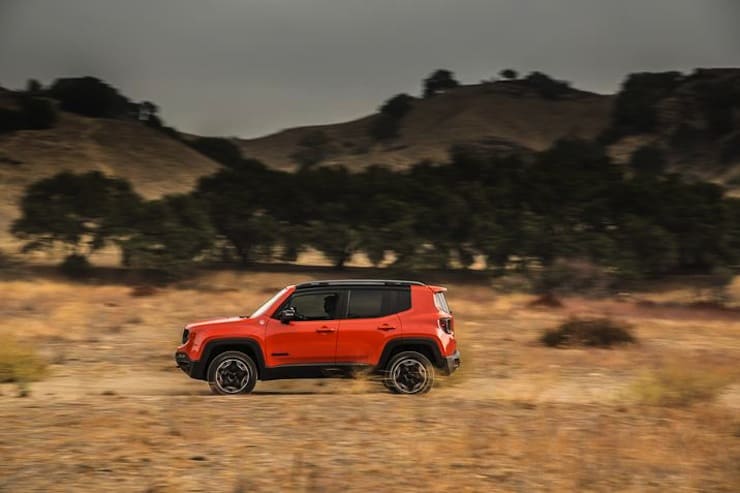 Jeep’s expansion into volume-selling territory began nearly a decade ago, with a pair of car-based models called the Compass and Patriot. Based on the Caliber compact, and sharing that car’s continuously variable transmission, they didn’t earn much respect from the Jeep faithful, many of whom saw them as proof the company had sold out in the name of boosting sales.

New Jeep Renegade a welcome addition to the family, and a modern expression of the classic Jeep design

Fast-forward to 2015, and Jeep’s latest foray into uncharted territory, the Renegade. Nominally a subcompact crossover to the Compass and Patriot’s compact classification (despite the fact that they’re small by today’s compact standards, and the newer Cherokee is a better fit in that class), the Renegade is more expensive than those two. The subtext is that Jeep’s parent company, Fiat Chrysler, considers this latest model an upgrade over its predecessors. First introduced as a 2015 model, 2016 versions of the Renegade add rain-sensing wipers as optional or standard kit (depending on trim). A BeatsAudio 506-watt stereo is also a new option.

Jeep’s reputation for off-road prowess being what it is, even its most pavement-biased models must offer some four-wheeler credibility. In the Renegade, that cred comes in the form of a Trailhawk package that includes low-range gearing, five-mode Selec-Terrain system, underbody protection, red tow hooks, and more aggressive tires. Our week-long test didn’t allow for any off-pavement adventures, but we did take a similarly-equipped version through an off-road course at the Automobile Journalists Association of Canada’s (AJAC) Testfest event in late October, and were suitably impressed by its capabilities–even if other, less-rugged small crossovers scrambled through the course almost as easily.

All Trailhawk models come with a 2.4-litre four-cylinder engine that makes 180 hp and 175 lb-ft of torque. That’s more than most models in the burgeoning subcompact crossover class can boast, but it doesn’t necessarily translate into better straight-line performance. The 1,600-kg Trailhawk is a heavy thing compared to the similarly-sized, but significantly less-powerful Honda HR-V and Mazda CX-3, which weigh 1,413 kg and 1,339 kg, respectively, in fully-loaded all-wheel drive spec.

All that mass made our tester feel only adequately powerful, and it took a toll on fuel consumption, which averaged about 12.5 L/100 km over a week of city driving.

In spite of its ostensible back-country bias, the hum of the Trailhawk’s knobby tires proved that trim package’s only noteworthy compromise on smooth surfaces. The ride is comfortable enough, but if you’re after super-sharp road-holding, you’ll better like the feel of that CX-3. Even a lesser-equipped version of the Renegade–which is nearly 200 kg(!) lighter in front-drive, non-Trailhawk form, with the same 2.4-litre engine–would likely feel more agile. (The base motor is a 1.4-litre turbo mill that gives up 20 hp, but generates more torque than the 2.4.)

With the 2.4-litre engine comes a nine-speed automatic transmission that puts Jeep at the head of the class for the sheer number of forward gear ratios. With that many gears to go through, it’s too bad it can’t always manage smooth shifts in normal acceleration.

The Renegade’s interior makes a better case for itself, with useful space for four people and front seats that proved reasonably comfortable. The squared-off rear is rare in this segment, and makes Renegade’s cargo area more practical for bulky stuff than what’s available under the more rakish tailgates on those Honda and Mazda models. Quibbles include climate controls positioned low on the dash, making them a reach from the driver’s seat. By contrast, the Uconnect communication and entertainment system shared with most other Fiat-Chrysler models generated few complaints, and is one of the more intuitive setups of its kind.

Our test car was fitted with the optional ‘My Sky’ open air sunroof, which comprises a pair of removable panels. It’s a cool feature, but once those panels are out, you have to store them somewhere, and when you’re on the road, that’ll be in the cargo area where they take up a lot of space.

Design-wise, the Trailhawk’s only interior curiosity is the red trim made to match the exterior’s red accents. Trailhawk or not, these pieces would be a better fit tinted to match the paint colour: in our case, the attractive, bright Jet Set Blue hue. The Renegade Trailhawk carries a $31,495 starting MSRP CAD, to which our tester added more than $4,000 worth of options, for a $35,700 price tag. If all-wheel drive is on your must-have list, the $27,495 Renegade North 4×4 model would be a better starting point; the Trailhawk’s main advantage is its extra 20 mm (nearly an inch) of ground clearance. Come to think of it, if you’re not worried about that, then make your Renegade a front-driver (the priciest being the $25,995 4×2) and save a few bucks.

Compared to the Competitors

As with most of its competitors, the Renegade’s off-road ability is little more than pretense. That’s okay: it’s still an easy vehicle to like for its cute appearance and useful interior; just don’t expect to earn many waves from Jeep loyalists in their Wranglers and Grand Cherokees. Chris Chasehttps://chrischasescars.com/
Chris has been writing professionally about cars since 2004, in print and online. He lives in Ottawa with his wife and two feline tyrants. In rare quiet moments, he can be found travelling or playing one of his way-too-many guitars. Chris is also a journalist member of the Automobile Journalists Association of Canada (AJAC).
FILED UNDER:
SUV and Crossover Reviews2016 SUV and Crossover ReviewsNew CarsCar ReviewsJeepJeep Reviews
Previous articleTractionlife.com Contributors Win Big at Journalism Awards
Next articleFirst Drive: 2016 Subaru Crosstrek Review

The Jeep Gladiator looks ready to rock on the outside but what's the interior like? Here's a closer look & review at the off-road truck's cabin & features.
Read more
Gear

Jeep teams up with Colorado-based bike builder QuietKat on what the automaker claims is “the most capable off-road electric mountain bike there is.” Is it?
Read more
Kia

What's the difference between the Telluride and Sorento SUVs? Kia's two big sport utiities offer cargo, capability, and tech but are not alike in many ways.
Read more
Jeep Cherokee

World Debut: 2020 Gladiator Pickup is the Jeep Outdoor Enthusiasts Have Been Waiting For

Sure, it's a crowded segment but Cadillac's new 2019 XT4 subcompact luxury crossover is a bold contender boasting the most size & horsepower in its class.
Read more