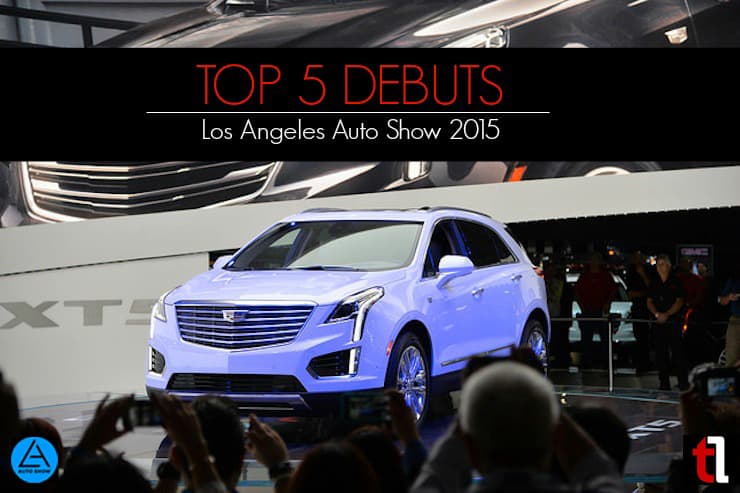 The LA Auto Show (LAAS), running from Nov. 20 to 29, enters its 108th year and continues to establish itself as one of the biggest venues on the show circuit for industry announcements and vehicle debuts. Here, our top five picks from the international auto show. Friendly joking about the “Fiata” broke out during the auto show when FCA threw the covers off of the upcoming Fiat 124 Spider. Paying tribute to sports car of the same name that was made almost 50 years ago, it is based on Mazda’s MX-5 and that’s nothing to be ashamed of.

The 124 uses the familiar 1.4 MultiAir Turbo four-cylinder engine — in this application making 160 hp and 184 lb-ft of torque — to drive the rear wheels. The soft top, like the Miata, is quick and easy to operate with one hand. The biggest giveaway to its connection with the latter, however, is the interior. While called the Fiat Connect 7.0 infotainment system, the screen, climate controls, and much more is plucked directly from the other roadster.

Look for the Fiat 124 Spider next summer. During his press conference presentation, Cadillac president Johan de Nysschen says, “We think it’s time an American luxury brand regained its position as one of the world’s best.” Enter Cadillac’s all-new XT5, a 310-horsepower, all-wheel drive crossover bearing the “XT” badge that will be worn by future utility vehicles.

A big selling point of the SUV is its lightweight architecture — the current SRX, to be replaced by the XT5, is 126 kilograms heavier while measuring 178 millimetres shorter. Other, more bloated, market segment competitors include the Audi Q5 (by 45 kg) and the Mercedes-Benz GLE (295 kg). And now for an open air driving experience of a completely different kind: here is the latest Range Rover Evoque. Convertible. Yes, this is a drop top SUV, the first of its kind to join the lineup.

Marketed as something for people who know no boundaries, what’s truly shocking is that the Evoque sans roof actually looks quite good from all angles. The fabric top folds flush into the rear deck for a clean appearance, and the doors are frameless giving the SUV a sharp silhouette.

The four-seater features 240 hp and a nine-speed transmission, and will start at $64,990 when it arrives in Canadian dealerships in spring 2016. The introduction of the 2017 Buick LaCrosse at LAAS actually represents two unveils in one: it was, of course, the first time people laid eyes on the redesigned mid-size executive sedan, but also the revised Tri-Shield emblem that gets a splash of colour again for the first time in several years.

Like the XT5, the LaCrosse, powered by a 3.6-litre, 305-hp engine mated to an eight-speed transmission, has undergone some significant weight loss. The large four-door is 136 kg lighter than the existing model, thanks in part to the use of specialty steels and sound-deadening materials.

Duncan Aldred, U.S. vice president of Buick and GMC, calls the LaCrosse a “bold statement about the future of Buick.” The car goes on sale early summer 2016. According to David Zuchowski, president and CEO of Hyundai Motor America, Hyundai has “10 all new or significantly enhanced vehicles arriving in the next 36 months.”

The first in that group is the 2017 Hyundai Elantra, which the manufacturer says embodies design inspired by fighter jets. The car is sleeker looking than ever, with a huge hexagonal grille, striking LED daytime running lights and an overall more aerodynamic shape with a better coefficient of drag than a Nissan Leaf.

The powertrain is comprised of a 2.0 L “Nu” four-cylinder engine creating 147 hp and 132 lb-ft of torque, and can be matched up to either a six-speed manual or automatic gearbox. A release date has yet to be announced.

Here are some other major debuts to know about.