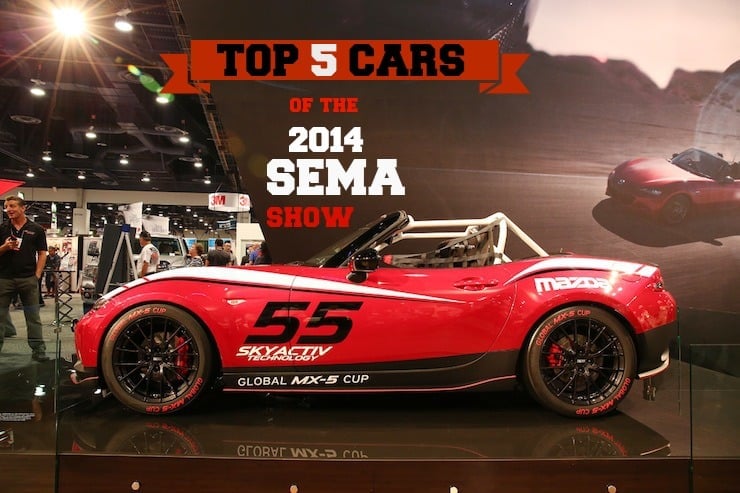 Las Vegas, NV – During the first weekend of November every year, over 100,000 people make the pilgrimage to Las Vegas for one of the greatest automotive trade shows ever put together: the Specialty Equipment Market Association Show. We pick our Top 5 cars of the 2014 SEMA show.

Known simply as SEMA, it is an industry-only event that draws aftermarket parts manufacturers, buyers from retail stores and media from all over the world. One of the biggest draws is the amazing custom builds that are put together by tuners and automakers. This year was no exception, and here are five of TractionLife.com’s favourite vehicles from SEMA 2014.

Here are our 5 favourite projects from 2014 SEMA

Toyota performed a dramatic unveil at their booth pulling off the covers and revealing a…  bone stock 2015 Toyota Camry. It was quickly revealed, however, to be no ordinary sedan but rather an 850-horsepower tube-frame dragster sitting underneath a deceptively normal shell. The powerplant was borrowed from a Tundra full-size pickup truck: a 5.7-litre V8 with a TRD supercharger and a wet nitrous system added for good measure. Equipped with beefy 335/30/18 drag racing tires, the Camry-from-Hell is expected to do the quarter mile in 9.8 seconds. There are no surprises that the Lamborghini Aventador is both a fast and visually stunning car — especially this fire-spitting “Shark Blue” example modified by Japan customizer Liberty Walk. It’s been given a full wide body treatment with a lip spoiler, side splitters and massive rear spoiler, among other things. Lexus fans everywhere can’t wait to get their hands on the brand new RC sport coupe about to hit showrooms. Gordon Ting from Beyond Marketing displayed his more extreme interpretation of the RC that has been fitted with a Rocket Bunny wide body, custom Enkei 6666 wheels, KW coilovers, GReddy Prototype Supreme SP exhaust system and big six-piston monoblock calipers on the front/four-piston on the rear. The world got their first glimpse of Mazda’s redesigned ND 2016 Mazda MX-5 roadster back in September. Since then, enthusiasts, myself included, have been wondering where it will hit the professional race circuit. The company announced at SEMA that there will be a Global MX-5 Cup series hitting North America, Europe and Asia soon. Sadly, no vehicle specs were given except that the cup car will be using a 2.0-litre SKYACTIVE-G four-cylinder engine. People wandered over to the Hyundai booth shortly before their press conference unsure of what to expect. What they got was five powerful souped-up versions of models like this 700-plus hp 2015 Sonata by California-based Bisimoto Engineering. The originally 2.4 L engine has been massaged with forged pistons, a huge high-boost turbocharger and custom body accessories and wheels.