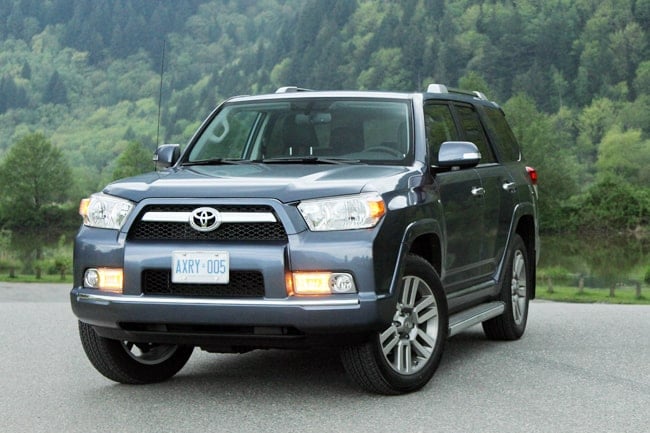 The Toyota 4Runner doesn’t see many changes for 2012, but still remains the off-road SUV of choice for many outdoor and urban families alike

There are not any significant changes for Toyota’s venerable 4Runner sport utility vehicle for 2012, but for many consumers this will be seen as good news.  Canada is a rugged country with lots of interesting places to explore, but many of these destinations are located well off-the-beaten-path and require a vehicle with a heavy-duty frame and chassis and four-wheel-drive capabilities. The reality is that the 4Runner is one of the few remaining SUVs available in the marketplace that is robust enough to tackle serious off-road duty, as most of its rivals have become neutered softies riding on modified passenger car frames. The 4Runner received its last major revision in 2010. This would be the fifth-generation of the go-anywhere rig and it came sporting a more angular and boxy design than the previous model, and it also had grown in virtually every dimension. The 4Runner is far from being a small vehicle- you will be reminded of its largess every time you have to climb up and into the vehicle- but despite its substantial length, height and width, I found it easy to park and it fit nicely into a standard garage.

The 4Runner’s styling is immediately recognizable as a Toyota, so there are styling cues and elements that you may see as familiar. I must admit that I was happy to see that there was no hood scoop on this truck, as for the last few years Toyota seemed to put these useless nostrils on all their trucks and SUVs in a misguided attempt to give them some machismo.

Cabin styling is very simple and uncluttered. The compact gauge cluster, well-organized dash layout, and tidy centre console make equipment operation a breeze. I found all the controls, switchgear and instruments to be within easy reach and the majority of them were easy to see from the driver’s position.

The second-row seating area is roomy enough for three adults to sit comfortably, but two would be able to really stretch out for a long trip.

The front bucket seats are firm and supportive, as are those in the second row. The second-row seating area is roomy enough for three adults to sit comfortably, but two would be able to really stretch out for a long trip. The seat backs feature the ability to recline up to 16-degrees for additional comfort. Toyota only uses the highest quality materials and fit-and-finish is much better than you would expect in a SUV.

The cargo area is accessed via a swing-up hatch that I found surprisingly heavy, but it may just be that my test vehicle was a low kilometre unit and the support pistons need to break in. The hatch itself offers the user protection from the rain (or refuge from the sun) when loading or unloading, an advantage that will be appreciated when faced with the unpredictable weather conditions typical of mountainous regions. The rear cargo area on my test vehicle featured two extra seats that stow flat when not in use creating a flat floor for gear, pets and luggage. Should longer items need to be carried the second row seats fold in a 40/20/40 configuration, although they don’t quite fold flat. I came to appreciate the tie downs and the 120 AC power outlet during my time with the truck

The Toyota  4Runner features the latest variant of the company’s well-sorted 4.0-litre V6 engine mated to a five-speed automatic transmission and four-wheel drive.  The V6  generates a healthy 270 horsepower and  278 lb.ft of torque, and is actually more powerful than the previously available V8.  Toyota is working hard to improve fuel efficiency across its line-up, so the V8 option is no longer available.

I took a weekend trip into the B.C. interior to see how the power train would cope with steep hills, higher elevations and extended  highway travel. Toyota’s Super ECT Automatic Transmission features a sport Sequential Shift, which has been engineered to make towing and hill descent easier.

The 4Runner will prove popular with your car-pool mates due to its large and comfortable cabin,   but be warned that the step-in height is quite tall, and the running boards are relatively narrow.

While the engine proved to be quite noisy at higher speeds, I did come away impressed with its acceleration and the smooth operation of its transmission. While not a sprinter, it executed stoplight launches and highway passing manoeuvres with aplomb.

The 4Runner will prove popular with your car-pool mates due to its large and comfortable cabin,   but be warned that the step-in height is quite tall, and the running boards are relatively narrow. Once seated your passengers will enjoy the view offered by the tall windows and elevated seating position, but the driver may not be so enamoured with the view. Unfortunately the long hood juts out like a platform and makes it extremely difficult for the driver to judge distances when navigating tight spaces, parking, or even just monitoring the road ahead. The 4Runner’s ride is relatively bumpy at times due to its body on frame design and rugged suspension (independent front; live axle rear), so if you are really looking for comfort and feel all-wheel-drive might suffice, you would be better advised to look at its sister the Highlander.

There are four models in the 4Runner line-up for 2012 – 4Runner SR5, 4Runner Upgrade Package, 4Runner Trail Edition, and 4Runner Limited with Navigation (as tested).

…so if you are really looking for comfort and feel all-wheel-drive might suffice, you would be better advised to look at its sister the Highlander.

Unlike the other three 4Runner models,  the 4Runner Limited with Navigation Package is equipped with a full-time four-wheel-drive system that utilizes a centre-console mounted switch which enables the driver to quickly choose between three four-wheel-drive modes: 4WD High–Free, with engine power split between front and rear axles depending on weather and traction; 4WD High–Locked, with power split equally between front and rear axles; and 4WD–Low for slow-speed manoeuvres. During my test period with the vehicle I didn’t get the opportunity to venture off-road, but it is common knowledge that the Toyota 4Runner has a loyal following and that many of these owners are known to take their vehicles off-road on a regular basis. As a result, the design team took the time to design the Trail Edition ($44,245) which adds a host of equipment to help the consumer get the most of their vehicle off-road. A kinetic suspension system, crawl control, multi-terrain ABS and a multi-terrain select system give this model a level of prowess usually reserved for custom vehicles. Add to this the addition of robust skid plates to protect the fuel tank and the transfer case from impact damage and you have a true weekend warrior. Unique styling elements include a roof rack, unique grille and wheels, matte black bumpers and handles, and the aforementioned hood scoop.

The Limited model rides on 20-inch alloy wheels  and features a sport suspension designed to enhance road holding. Niceties such as a dual-zone automatic climate control system, navigation, a rear backup camera and a premium JBL engineered entertainment system are some of the highlight features offered on this top-of-the-line model.

The Toyota 4Runner is truly a go anywhere vehicle that is more than competent enough to handle daily duties as a people hauler, but should the weather or road conditions take a turn for the worse, there are few vehicles I would rather have to count on to get to my destination safe and sound.

Russell Purcellhttps://www.flickr.com/people/autoexposurecanada/
Russell Purcell is an award-winning automotive journalist and photographer based in Vancouver, B.C. His passion for automobiles was sparked at the tender age of six, when a family friend gave the wide-eyed first grader a ride to school in a track prepared Porsche 911 RSR. He continues to fan the flames by building an impressive library of automotive related books as well as a vast collection of interesting automobilia and motoring artefacts. Russell is a member of the Automobile Journalists Association of Canada, and is active on Twitter as RoadTestRuss.
FILED UNDER:
Mid-Size SUV & CrossoversToyota 4Runner Reviews & News