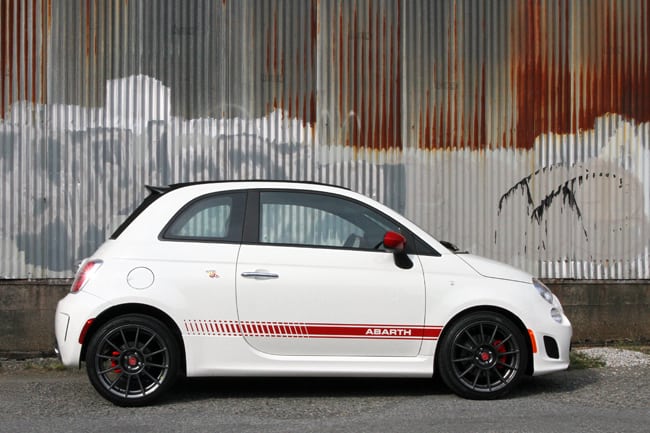 The 2013 Fiat 500C Abarth is cute and convertible but lacks the luster in the twisties. Still, it’s Italy’s answer to the hot hatch.

Canadians love small cars, so it should come as no surprise that when Chrysler brought the tiny Fiat 500 to our shores it quickly found a home in many car parks and driveways. But as handy as the 500 is to navigate through congested city streets, it really loses its luster when the roads get twisty as it doesn’t offer much in the performance department. While the majority of Fiat 500 buyers are shopping for an economical urban runabout, there are always those hooligans out there looking for wheel lifting and tire squealing performance. Enter the Fiat 500 Abarth, Italy’s answer to the hot hatch.

What is an Abarth?

Abarth is a small Italian company that begin building compact race cars and performance parts in the 1950s. The firm’s first association with Fiat began in 1952 when Abarth used Fiat mechanicals as the basis for its stunning Abarth 1500 Biposto show car. Similar collaborations continued until Fiat eventually purchased the operation in 1971 and it soon became the racing arm for the company.

In 2007 Fiat decided to reinvigorate the Abarth brand in an effort to attract younger buyers and broaden the company’s appeal to the enthusiast crowd. For 2013 the Fiat 500 Abarth has come to North America to further promote the arrival of the Italian manufacturer to our shores. The car is available in two forms-a two-door hatchback and a convertible. The Fiat 500 Abarth comes equipped with a unique body kit, a roof-mounted spoiler, and high-performance wheels and tires. Add to this race ready graphics and a low ride height and the car has the go-fast looks popular with the tuner crowd. Twin, chrome exhaust pipes erupt with a heavy burble that is just raspy enough to make the hairs stand up on your neck and arms and its distinctive bark will tickle your ears with each downshift. This is especially in the convertible version of this sporty machine. C is for Convertible

The subject for this review is the convertible version of the car which is known as the Fiat 500C Abarth. Unlike most convertibles which feature a complicated structure of bows and braces which retract like an accordion into a large pile of fabric on the vehicle’s rear deck, the roof of the 500C behaves more like a large sunroof in its operation. There are no latches to unhook or levers to pull as the durable black panel slides along fixed roof rails before forming a compact and carefully folded pile between the two rear roof pillars. With the roof retracted there was surprisingly little buffeting in the passenger compartment due to this novel design. The 1.4-litre MultiAir engine is turbocharged and features twin intercoolers to efficiently feed it air. It produces 160 hp and 170 lb-ft of torque which does not sound like much in this day and age, but given the car’s diminutive size and light weight it delivers a respectable output. In a straight line the nose of the car gently lifts as the car squats down on its haunches and rockets from 0-100 km/h in a tick over seven seconds.

The Abarth features an analogue turbo boost gauge which is mounted conveniently to the left of the wheel to allow the driver to monitor the pressure of the turbocharger. The same gauge doubles as a shift indicator when the car is being operated in Sport mode so that the driver can get the most from the engine as they row through the heavy-duty, five-speed gear box.

The performance-tuned suspension incorporates advanced KONI shock absorbers up front,   stiffer spring rates front and rear, and a lower ride height (15mm) in an effort to improve on the Fiat’s handling and minimize body roll. Also on board is the Abarth Torque Transfer Control (TTC) system which automatically distributes engine torque between the front wheels to minimize under-steer and maximize traction.

As the offerings from the Abarth division have a substantially more performance potential than the regular Fiat 500 models the cars come fitted with a high-performance brake system with semi-metallic brake linings at all four corners. Larger 11.1-inch ventilated rotors are utilised with great effect as my test unit stopped on a dime. In a final splash of Italian flair the brake calipers have been lacquered in Rosso (red) paint. The driving position in a Fiat 500 is an odd one. You sit very high and the foot well is very short if you have long legs. At 6’2″ tall my right knee spent a week getting fresh with the center console, and my size 13 feet were partially obstructed by the same due to the odd placement of the pedals. With the roof in place I had to forego wearing a hat as my head was brushing the headliner even with the seat in its lowest position.

The interior on my test vehicle seemed to be well constructed and the level of fit and finish was impressive. The classic contrast of the largely black interior and white dash panel was pleasant to the eye, but the vibrant lipstick red seats and door inserts gave the Abarth its real curb appeal.

The Car’s dash layout is a study in simplicity as there are minimal controls and very little clutter. Due to the car’s petite size everything is within easy reach of both hand and eye, although some may feel the shifter sits too high due to its placement on the dash rather than the floor. The three-spoke, flat bottom steering wheel is one of the best in the business. It features a leather wrap, bright red stitching, and of course, a centre cap with the iconic black scorpion logo. There are four more of these Abarth shield badges on the exterior of the vehicle as well as red scorpion caps on the wheels. The Fiat 500C Abarth has been designed to fit four adults, but to be honest, it is best suited for a couple of adults and their weekend gear. The rear seating area is very small and the mere act of slipping past the front seatbacks into the tiny space should be reserved for small children.

The front seats are proper sport buckets and feature a fair amount of side bolstering but they didn’t do much to inspire confidence as the foam used in their construction seemed abnormally pliable and soft. As a result, the bolsters were unable to hold me firmly in place during aggressive cornering manoeuvres.

After a few days behind the wheel of this Italian pony I finally got comfortable enough to explore its handling limits. The mere fact that the car has an extremely short wheelbase and rides on a very stiff chassis means that you will feel every bump along your way. Surprisingly, beyond the bone-jarring and head-bumping ride I found it hard to get a feel for the road due to the elevated seating position and overly assisted steering. I imagine this car would feel like a go-kart if the seat was properly placed, but unfortunately you feel like you are perched atop the seat of a riding lawn mower. I will admit however, that the car felt relatively quick and nimble, but I came away wanting so much more. The power is there, the car tracks with precision, and the short-throw gearbox is pretty slick, but in my opinion the Abarth comes up short as a true hot hatch. Perhaps a two seat version with serious bucket seats on minimal rails would be the ticket, especially for taller folk as they would be able to stretch out with extended  leg room and a lower centre of gravity. It works for the slightly larger Mini.

The Fiat 500C Abarth is high on style and still somewhat rare on Canadian streets. It would be the perfect ride for a fashion conscious hair dresser with attitude. I say this due to the fact that the only person I know with one is just that. She bought the car because it’s Italian, as is she, and she loved the fact that it made enough noise to announce her arrival everywhere she goes. I felt like a cartoon character while behind the wheel of this car largely due to the obvious mismatch of my manly size and its teeny tiny proportions.

I can see where the Fiat 500 Abarth models have a lot of performance potential, but due to the odd seating position and off-set pedal arrangement it is almost impossible to extract the performance that is already there. As a result, the Fiat Abarth is definitely a work in progress. The Volvo V60 Cross Country does a great job of reminding us why station wagons were once so popular (and can do pretty much everything that an SUV can).
Read more
Coupe Reviews

More sports coupe and less muscle car, the 2018 Dodge Challenger GT AWD stands alone as the only model to deliver its power to all four wheels.
Read more