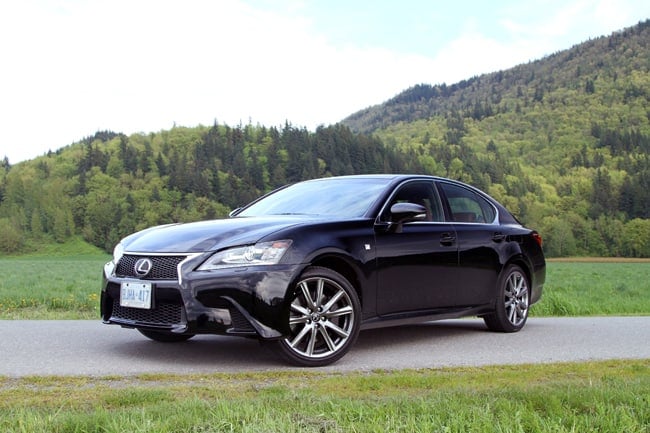 The Lexus GS has been thoroughly reworked for 2013, so I was full of anticipation when I arrived to pick up the car for my test drive. I was also intrigued because the test unit was equipped with the company’s new F-Sport Package, and I had yet to see one of these cars in the flesh.  As the garage door rolled up and I got my first look at the car’s almost sinister new face I have to admit I was excited, and this was the first time a Lexus product had had that effect on me in a long while.

Lexus, much like its parent Toyota, is often accused of producing rather bland designs.  A quick walk around the new GS proves that this may no longer be the case. The car’s lines are crisp and clean, but subtle curves and a plethora of unique styling elements combine to give the car a distinct flare that will make it stand out from the crowd. Overall it is a more mature design which will appeal to the target audience much better than the boy-racer look typical of most performance offerings from Japan.

Lexus, much like its parent Toyota, is often accused of producing rather bland designs.  A quick walk around the new GS proves that this may no longer be the case.

The company set the ever-popular BMW 5-Series as its benchmark when it came time to renovate and reinvigorate the GS, and after spending some time behind the wheel it is obvious that they have created a contender. I have no qualms about referring to the new GS as a sports sedan, something I wasn’t willing to do with its forbearer. In fact, the GS 350 now possesses the styling, performance and luxury required to give its many rivals a run for the money. The interior is a classy affair, and it is apparent that the designers worked overtime to put the vanilla label firmly in the rear view mirror. The deep black exterior paint on my test vehicle will prove popular with executive types, but the high contrast earthy red tone that cloaked the seats and door panels was stunning. Lexus calls this Garnet, and it caught the eye of every person who saw the car. The quality of the leather, trim and carpeting used throughout the car’s interior far surpassed what I would expect in a car of this price point, and I suspect that individuals cross-shopping Lexus with the likes of BMW, Audi and Mercedes-Benz will award the Japanese brand some extra style points. The driver will appreciate the layout of the cockpit, which places all the controls and switchgear within easy reach of both hand and eye. I found it difficult to take my hands off the thick-rimmed, three-spoke, F-Sport steering wheel as it was that comfortable.

Taking a page from the marketing manuals of rivals such as Germany’s iconic BMW and Mercedes-Benz brands, it appears that Lexus is looking towards using the F-Sport moniker  to differentiate those cars that feature performance levels that will appeal to the enthusiast driver. BMW’s M division and Mercedes-Benz’s AMG are world renowned for putting a host of special machines on the road, and with cars like the F-Performance IS F and LFA in the Lexus portfolio, Lexus has established the foundation for its own more attainable performance line under  the F-Sport name.

The $4,800 F-Sport package includes a host of styling elements including 19-inch F-Sport wheels, an aggressive front fascia that features bold mesh inserts to complement the grille treatment, a subtle rear spoiler and high-performance brake calipers. On the inside the level of F-Sport bling is actually quite reserved, as it includes subtle badging, aluminum pedal covers, metallic accent trim, and perforated leather  F-Sport seats. The aforementioned steering wheel is also part of the package, as is a special shift knob and door sill scuff plates.

On the technology side the F-Sport Package adds the Drive Mode Select system with S+ mode which allows the driver to customize the car’s handling dynamics and performance parameters via the dash-mounted display screen interface. An advanced Adaptive Variable Suspension system has been developed to bless the car with improved steering response as well as significantly reduce the effects of body roll and lean.

The GS350 is fitted with a 3.5-litre V6 engine mated to a six-speed automatic transmission. My car also featured the latest variant of the company’s all-wheel-drive system. The base version of the car is a rear driver, which I have no doubt would be a blast to drive with this power train, but I tend to believe that a large number of Canadian orders will be all-wheel-drive equipped cars. A hybrid model  known as the GS 450h is also on the menu, but this car will only be available as a rear-wheel-drive model. It will arrive with a 3.5-litre V6 fitted with a hybrid system and a very efficient continuously variable transmission (CVT). At the touch of a button the car came to life. As I gently tapped the throttle the throaty rasp of the exhaust tickled my ears. The ultra-smooth V6 under the car’s shapely bonnet produces 306-horsepower and 277 lb-ft of torque. While that might not sound like a lot in this era of muscular motors, it proved sufficient to keep me enthralled during my time behind the wheel.

A hybrid model  known as the GS 450h is also on the menu, but this car will only be available as a rear-wheel-drive model. It will arrive with a 3.5-litre V6 fitted with a hybrid system and a very efficient continuously variable transmission (CVT).

As I made my way through the city and rush hour traffic, it became clear that this car had dual personalities. The car was a model citizen as I navigated through the urban environment, but once I found a stretch of open road the punchy delinquent would attempt to commandeer the controls, begging for me to adjust my inputs to release the hounds. The car was more than content to do all the work in the shifting department, but I should warn you that once you start manipulating the shift paddles it will be hard to stop. Gear changes are quick and transitions are smooth enough to go unnoticed by your passengers, that is until the downshift blip function kicks in to stir them awake.  Acceleration is very linear as the car begins its hustle to highway speeds without any excess drama, and Lexus claims runs from a standstill to 100 km/h will take a mere 5.7 seconds

Surprisingly the weight penalty afforded the car by the addition of the all-wheel-drive system hasn’t hindered its performance as much as I would expect. In fact, I think the additional weight may have helped give this car its very neutral handling. The car feels exceptionally well balanced when executing turns, carving corners and traipsing over roller-coaster-like hills. The system directs 70-percent of the power to the rear wheels which helps preserve the handling dynamics favoured by the majority of enthusiast drivers, but when wheel slippage is detected, the system reacts to transfer power where it will provide optimal  traction.

The list of standard equipment is long and includes all the comfort, safety and entertainment accessories expected in an executive class sedan, but notable highlights include an abundance of LED lighting systems and a multi-use screen for navigation, entertainment and system controls.  The latter is controlled via a mouse-like input device that seemingly floats above the centre console as you explore the settings for various comfort, audio and convenience systems.

A premium 12-speaker audio system with XM satellite radio, Bluetooth capabilities and auxiliary and USB inputs is also on hand to help satisfy your audiophile needs.

The 2013 Lexus GS 350 stands as a huge step forward for the Japanese luxury brand, especially when equipped with the F Sport package. I suspect that Lexus will see a surge in both showroom traffic and sales as consumers become more aware of the company’s intriguing new direction.