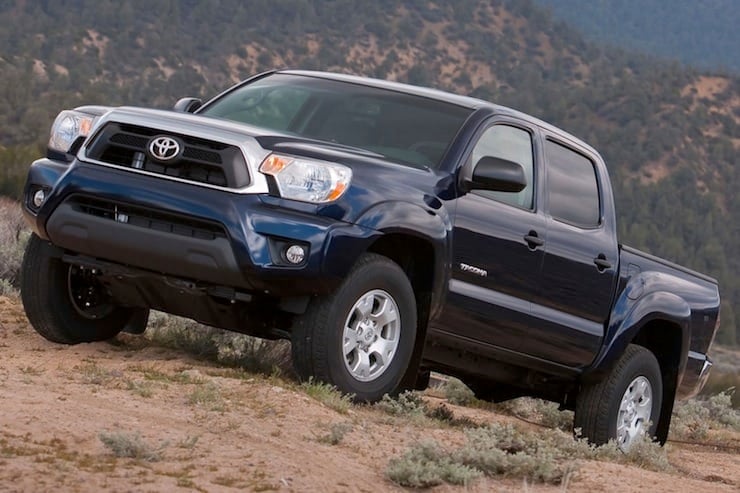 Short of the Tacoma TRD, the top-end 2015 Toyota Tacoma DoubleCab Limited we review is fairly basic — but we anticipate (and hope) the upcoming, all-new 2016 Tacoma will be anything but.

For the uninitiated, choosing a pickup truck can be an intimidating process. Choose a cab size (regular, extended or crew), a box length (short, regular or long), two- or four-wheel drive, four-, six- or eight-cylinder engine, fuelled with gas or (in some cases) diesel. Most of the trucks on the market are full-sizers, but a handful of truck makers offer mid-size models.

Model-year 2015 marks the end of the second-generation of one of those mid-sizers, the Toyota Tacoma. With GM’s new mid-size Chevrolet Colorado and GMC Canyon having reached dealerships just a few weeks before you read this, and Toyota gearing up to begin producing an all-new Tacoma, Toyota wanted to remind us that, despite having been around for more than a decade, their smallest truck is still… a truck.

Trucks are essentially workhorses, having started out as utilitarian vehicles. If you needed one, you parked it next to your family’s much-more-comfortable sedan. In recent years, however, sensing an untapped demand, truck builders began offering more upscale amenities in pickups, so that if you want, you can now spec one out with convenience items and interior space that rival large luxury sedans. Not so in the Tacoma. True to its entry-level standing, even the top-of-the-range DoubleCab Limited model we tested is pretty basic inside. There’s no automatic climate control, no ventilated seats, intelligent keyless entry, pushbutton start or fancy entertainment interface. Toyota doesn’t offer a trailer brake controller, and there’s no cavernous centre console storage. Sure, it has heated leather seats, navigation and a USB input, but this is, quite simply, a truck.

Once you’re inside, the Tacoma is comfortable enough, but getting in presents a challenge. Side steps are meant to ease access, but these are placed too high – as in, too close to the height of the cab floor – to be much use, and a low roofline means you have to duck down awkwardly at the same time you’re stepping up to get in. It proved easier to step straight onto the doorsill and haul oneself in using the assist handle on the A-pillar.

Rear seat space is useful, falling somewhere between that of a compact and mid-size sedan. Flip the bottom cushions forward and the backrests down to create a flat load surface. Dodge offers a more elegant solution in its big Ram 1500: the bottom cushion simply flips up and out of the way, revealing a folding cargo platform that’s easily deployed and puts the load surface lower relative to the truck’s roof. The only other truck whose design (mechanically, at least; Tacoma got a styling refresh in 2010) is anywhere near as stale as this is the Nissan Frontier which, like the Toyota, last saw a drawing board in 2004. The Tacoma certainly drives like a decade-old truck. Unloaded, the ride is rough – more so than any other pickup we’ve tested recently, to the point that driving over broken pavement requires constant steering corrections to keep it in one lane.

Tacomas in Access Cab configuration use a 2.7-litre four-cylinder engine, with the option of a 4.0-litre V6, but all Double Cab models (like our tester) get the V6 as standard. It’s a simple engine, even as truck motors go, making 236 hp and 266 lb-ft of torque. Neither number is particular impressive – the 2015 Chevrolet Colorado/GMC Canyon’s 3.6-litre makes similar torque, but boasts 305 hp, and every full-size truck comes with a V6 more powerful than the Tacoma’s – but the engine moves the truck with ease, even in full-throttle highway acceleration, where we expected it to run out of breath. Also notable is the five-speed automatic transmission that, again, despite giving up at least one ratio to every more recent truck, does its job unobtrusively.

Value for a Hauler

In a car, value tends to be most closely equated to the features available at a given price. In a truck, especially one you’ll regularly use to tow or haul stuff, it’s wiser to look at the truck’s capability for the money it commands.

The main benefit of a mid-size truck is that its tidier dimensions make it easier to handle in the confines of city driving; when the smaller pickup prices out comparably to a bigger, more capable model, it’s easy to justify the move up. Tacoma’s rough ride and basic interior make the decision even easier. Chris Chasehttps://chrischasescars.com/
Chris has been writing professionally about cars since 2004, in print and online. He lives in Ottawa with his wife and two feline tyrants. In rare quiet moments, he can be found travelling or playing one of his way-too-many guitars. Chris is also a journalist member of the Automobile Journalists Association of Canada (AJAC).
FILED UNDER:
New CarsCar ReviewsToyotaToyota ReviewsToyota TacomaToyota Tacoma ReviewsTruck Reviews

Expect a 2021 Ford F-150 redesign to look not much different than its predecessor, but offers precisely what truck buyers need from a tech viewpoint.
Read more
Toyota