Do today's sedans need that emotional appeal? The new 2016 Toyota Avalon Limited is solid and reliable as you'd expect from Toyota - but unexciting to the core. 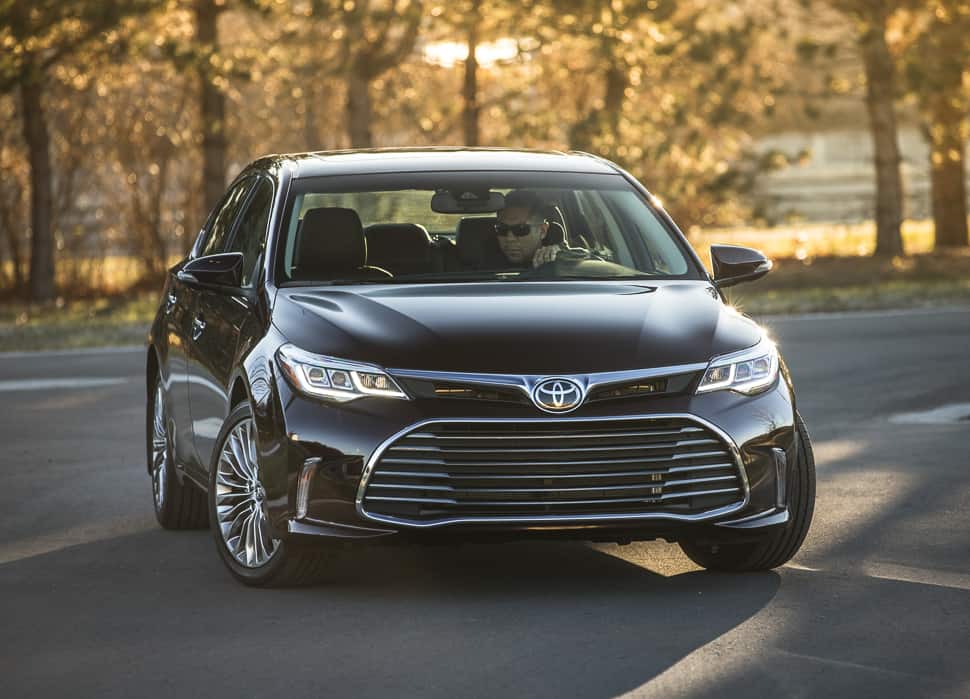 Gatineau, Quebec — “Unveiled as all-new in 2012, the fourth-generation Avalon was the first vehicle to meet Toyota President Akio Toyoda’s challenge to create cars that spark people’s emotions.” So goes the first line of the press release describing the revised 2016 Toyota Avalon.

It’s difficult to imagine anyone whose emotions would be sparked by this mid-size sedan — even if they happened to own the car. This doesn’t mean to say that the Avalon is not a smart purchase decision. Quite the opposite. But an emotional driving experience is not in the Avalon order guide.

In fact, many of the decisions made with respect to this new version have solidified its reputation as a capable yet unexciting car. The driving dynamics, for example. In a nutshell, they’re soft. The steering is light and vague, a trait shared by other cars in the Toyota portfolio. In the rainy driving conditions, the feedback from the tires and steering wheel was numb and difficult to decipher. (The Touring version apparently has a suspension system with a sportier tune, all other versions, including the Limited at our disposal, were tuned for comfort.) On the other hand, the ride was so comfortable and quiet, it helped isolate us from the nasty weather, the uneven quality of the pavement, you name it.

This is a somewhat unique selling proposition that the company’s Lexus brand has been so successful in championing. Strip the Toyota badges off the inside of the Avalon and apply some higher-grade materials and this car is, for all intents and purposes, a Lexus at a fraction of the price. The engine is decent and, to be sure, the V6 gas-powered offerings from Toyota/Lexus are one of the strengths from this manufacturer. Despite its relatively mild output (268 hp) for a modern mid-size sedan, the 3.5L V6 can hustle the car down the road when needed. And highway fuel efficiency is very good for a car of this size.

The biggest change in the new Avalon from the previous version is to the exterior design. A new front grille, turn signals and LED taillights give the car a more aggressive look overall. The Limited mode, the top of the Avalon heap, also features new 18-inch chrome wheels.

There are a few vehicles in the Toyota line-up that can get away with the brand’s garish front grilles and the Avalon is one of them. It’s a handsome sedan, definitely not as polarizing as some of the more recent Toyota models. And if the Avalon carried a different badge, it would easily be mistaken for something from a much higher-priced brand. This is a midsize sedan, but it’s on the large side. The cabin is spacious and airy. The back seat can fit three full-size adults snugly. Those seats don’t fold down, though, a missed opportunity to expand the cargo carrying capacity of what is not such a large trunk.

There’s an art in figuring out how to make the trend towards mixed materials work in car interiors. Unfortunately, the Avalon is not a shining example of this movement. The colours, texture and look of the interior panels, gauges, buttons and switches seem outdated and uninspired.

In the technology game, if you’re not moving forwards, you’re standing still. The Avalon has a large touchscreen, a premium sound system and the optional driver assist gimmickry you might expect. But it’s not exactly forging a bold new path. Takeaway: is the 2016 Avalon Limited worth it?

The Avalon apparently has high customer loyalty; people who own one tend to want to own another. But this is not an emotional reaction. It’s the equivalent of someone wanting to stick with the same brand of washer/dryer when their current set (which has lasted a good long time, mind you) bites the dust.

But there’s nothing wrong with a passionless mid-size sedan, particularly when it’s as relaxing to drive as this one. In the final analysis, the 2016 Toyota Avalon is solid as all get-out, but unexciting to the core. But for someone looking at landing a Lexus without needing the ego boost from the Lexus badge, this is your sedan.