The 2017 Honda Accord Hybrid is around $4000 more than the top-end Accord Touring. So is the choice to go green worth it? 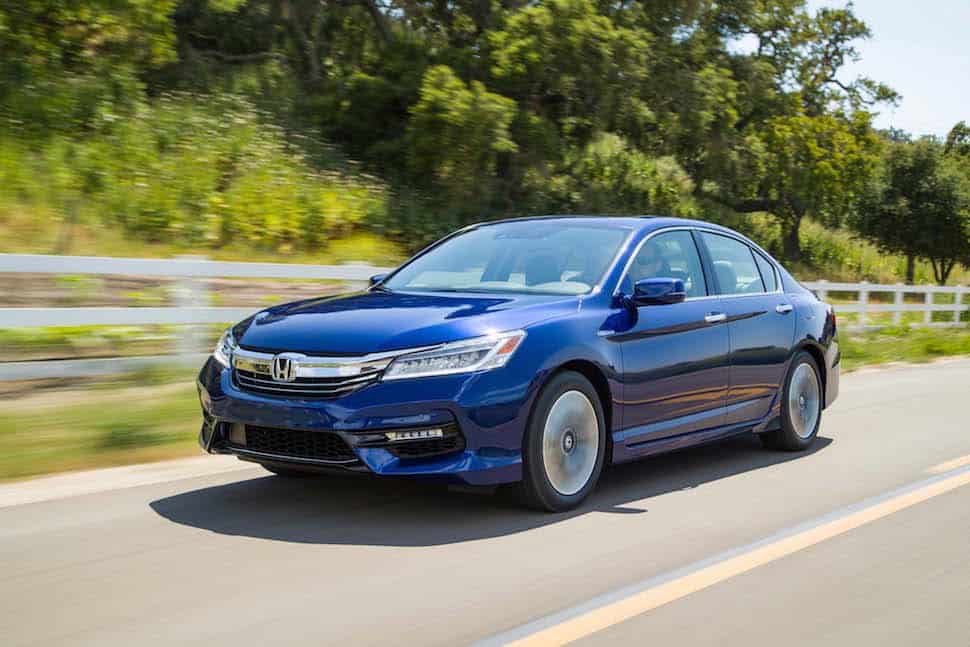 On a superficial level, there are two kinds of hybrid cars: those that make a big deal of the fact that there’s a gas-electric powertrain under the hood, and those that follow a more low-key formula.

Typically, those in the former category tend to be more serious about their hybrid-ness, with bodies shaped to cheat the wind without compromising practicality.

It’s in the latter group where you’ll find cars like the Honda Accord Hybrid. Like the Prius, it has a sophisticated gas-electric powertrain, but packages it in the well-known Accord’s recognizable styling.

That’s important for a couple of reasons. First, a lot of people trust Honda and the Accord, which will help sway first-time hybrid shoppers still on the fence about the technology. Second, it packages an advanced drivetrain in a good-looking body. The Prius is a fantastic car, but the fourth-generation model introduced in 2016 is not what we’d call handsome.

Accord Hybrid Interior and Cargo Space

While a car like the Prius presents few compromises (except, perhaps, for its looks), stuffing a conventional sedan like the Accord full of hybrid hardware is tough to do without introducing a significant one: the Accord’s battery pack lives behind the rear seat, where it cuts cargo space to what would be considered good in a compact sedan, but only so-so for a car as large as the Accord.

(Hyundai has the solution for that compromise: a smaller battery that fits under the trunk floor of its Sonata Hybrid.)

Otherwise, there’s little to give away the fact that this isn’t a garden-variety Accord: you get the same spacious, comfortable interior with plenty of head- and legroom for four. However, not even a car this spacious can fix the fact that a centre rear-seat passenger has to splay their feet around the centre console.

A 2016 update (carried over to our 2017 Touring trim tester) took away a console-mounted knob that controlled most navigation system functions and brought to the Accord an all-touch infotainment system. It’s less intuitive than some, but its only truly infuriating feature is a volume control that’s basically impossible to use when the car is in motion.

The current, ninth-generation Accord is among the best cars Honda has produced in the last decade and a half, so the company worked hard to preserve the gasoline version’s agreeable over-the-road manner. Straight-line performance is about in line with that of the standard four-cylinder version; the hybrid’s 212 hp (a bonus of 27) would give it an advantage if not for its extra 55 kg in curb weight.

In any event, flat-out acceleration isn’t what this car was built for. In relaxed driving, the electric motor moves the car off the line with the gas engine kicking in after a few seconds, the transition subtle enough that most of your passengers won’t notice. A heavier right foot will work the engine harder, sounding a droning note you’d almost think Honda engineered in to encourage more efficient driving habits.

All this to say that a hybrid car, no matter what shape it takes, is a lifestyle choice, and if your chosen lifestyle involves reducing your own reliance on fossil fuels, we say go for it.

If you’re after as little gas-burning action as possible, hit the “EV” button next to the shifter. It commands the car to run on electricity only until the battery is discharged or you ask for more acceleration than the electric motor can provide on its own.

A few years ago, Honda promised a plug-in version of this car that would offer 30 km or so of electric motoring on a full charge, but that car never materialized. If you want that in a Honda, though, it’s coming later this year when the Clarity reaches showrooms.

For now, the Accord Hybrid remains Honda’s most fuel-efficient model overall, with a combined fuel consumption rating of 5.0 L/100 km; our week of driving yielded a less-impressive average of 6.4.

Takeaway: Is the 2017 Honda Accord Hybrid reliable and worth it?

Hybrids continue to pose an economic quandary for many drivers: a top-end four-cylinder Accord Touring is a perfectly sensible and efficient car that’s priced nearly $4,000 less than the similarly-equipped Hybrid version. Sure, you’ll save that much in gas over a few years, but financially it probably makes more sense to stick that money in your retirement fund or put it toward a vacation.

All this to say that a hybrid car, no matter what shape it takes, is a lifestyle choice, and if your chosen lifestyle involves reducing your own reliance on fossil fuels, we say go for it. Some drivers like to flaunt that decision, but if you prefer to blend in, the Accord Hybrid is a nice way to fly under the radar.