The 2017 Santa Fe is easy to like for its combination of interior space and easygoing over-the-road feel, though the Sport moniker may be a little misplaced on this well-rounded SUV. 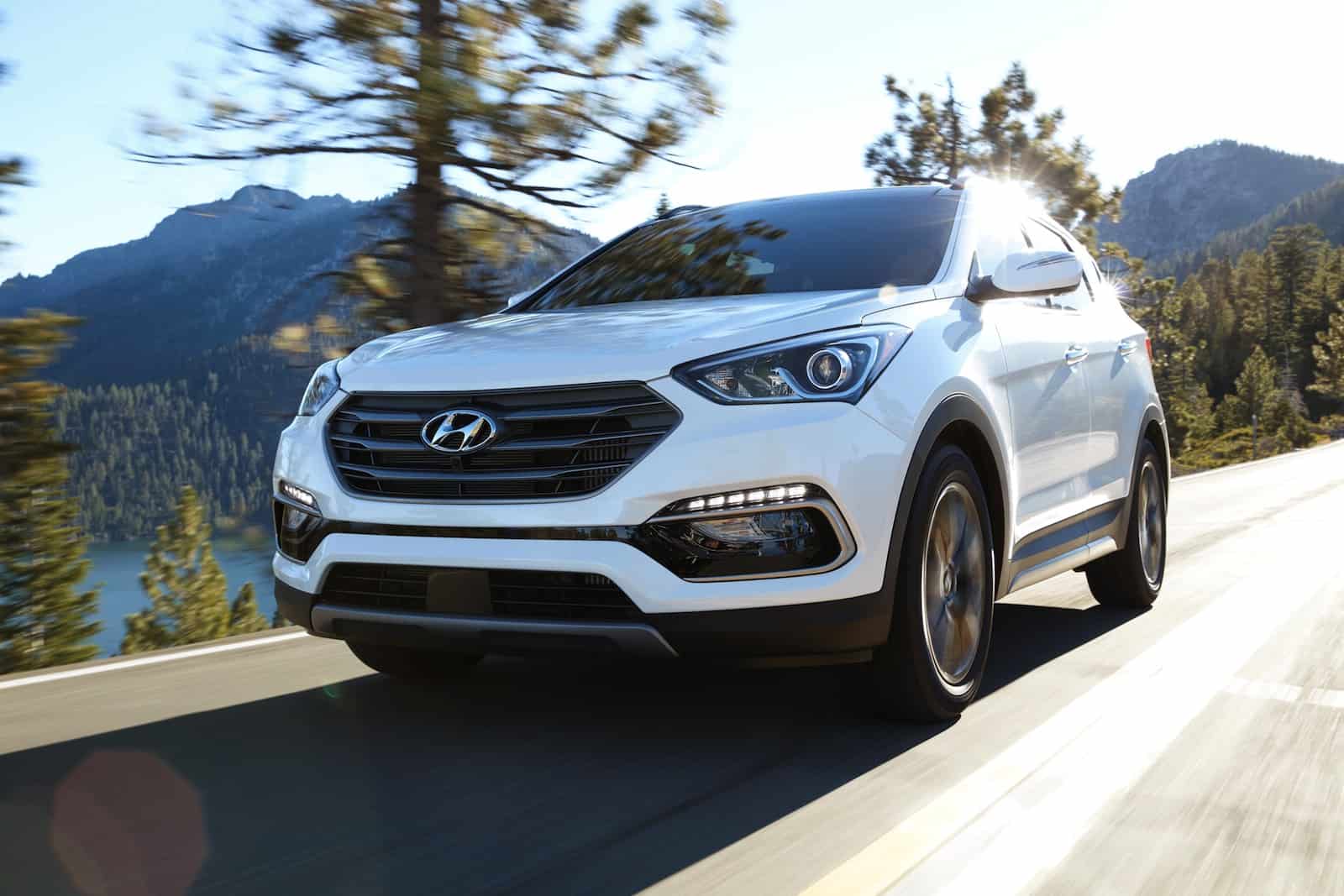 Attaching a “sport” label to any vehicle that’s not actually sporty seems a dicey proposition to us, and maybe even a little dishonest. Yet it’s a pretty common tactic used to set two variants of the same model apart from each other.

If you want an example of how not to use the sport label, take the five-seat version of Hyundai’s Santa Fe mid-sized SUV. Updated for 2017 with refreshed styling and some new features, it gets a Sport designation to distinguish it from the larger, seven-seat Santa Fe XL, but brings little actual sport to the table, especially in the SE-trimmed model we tested, with its 2.4-litre four-cylinder engine making 185 hp and 178 lb-ft of torque.

This is a $35,000 vehicle that sits near the middle of the Santa Fe Sport range, missing out on an available turbocharged engine by about $2,300 and costing nearly $3,000 less than a better-equipped Luxury trim that shares our tester’s lower-spec motor.

The SE comes with a lot of equipment of its own: AWD, blind spot detection with rear cross traffic alert, backup camera, leather upholstery, heated steering wheel and rear seats, panoramic sunroof and a windshield wiper de-icer. That’s a nice list for a $35,000 vehicle that turned out to be pretty easy to live with.

Let’s start with that base engine: as much as sub-200 hp seems not at all like a lot in a mid-size crossover, this 2.4L proved surprisingly spry in the Santa Fe. Acceleration is adequate, although if you routinely load your vehicle up with four people and commensurate cargo, the 2.0L turbo upgrade would be a wise choice.

Hyundai quotes fuel consumption estimates of 12.0/9.1 L/100 km (city/highway), and our tester averaged 12.5 in a week of wintry December weather.

Driving impressions: how’s the Santa Fe Sport without the turbo on the road?

You’ll find more crossover driving joy elsewhere: this car is pleasant to drive, but doesn’t reward being pushed hard. Instead, Hyundai hopes you’ll find the Santa Fe effectively disappears from around you — exactly the opposite of what a sporty vehicle aims to do.

It mostly succeeds at becoming invisible, but we spent our week being annoyed by the large blind spot between the back window and the tiny rear side glass; you’ll be grateful for the blind spot detection system. On that note, more advanced active safety features like automatic emergency braking and lane change assist don’t become available until you reach the Ultimate model, at nearly $45,000. Meanwhile, for example, Honda loads its CR-V up with such driver assists for the same price as our Santa Fe SE tester.

We tend to caution buyers about panoramic sunroofs, if only because they eat into headroom. You won’t notice if you’re shorter than six feet, but this is something worth paying attention to during your test drive. If it bugs you, the $33,100 Premium model leaves it out, along with leather seating, but retains the rest of the SE’s conveniences.

You’re less likely to lack for legroom: the Santa Fe’s is generous front and rear, but if you’re wider in the hips you might find the front seats a bit narrow.

The rear seats fold down, but the seatback release handle is way down below the bottom cushion, a less convenient spot than atop the seatback. Even better would be a lever in the cargo area. Once folded, the seatbacks are a heavy lift to put back into place, and the adjustable-angle seatbacks don’t automatically return to where they were before. Other crossovers make this kind of stuff easier.

Conversely, Hyundai could teach some other manufacturers’ designers how to do a straightforward centre stack. Santa Fe’s dual-zone automatic climate controls are among the user-friendliest we can think of, and the stereo interface is similarly simple, with its combination of hard buttons and touchscreen commands.

This Korean brand has built a reputation for being a value leader, and Santa Fe still is, depending on what you compare it with. Honda’s 2017 CR-V is technically a compact crossover to the Santa Fe’s mid-sized status, but it comes in an EX-L trim that matches the Hyundai’s horsepower and convenience goodies (adding a power tailgate) and bests it handily safety-wise, in a package only nominally smaller and $300 pricier. Conversely, Ford’s Edge is at least a $40,000 vehicle once you’ve equipped one to match our Santa Fe’s kit, with a standard 2.0L turbo engine; Santa Fe is still only $37,300 with its own 2.0L turbo installed.

The family-friendly crossover field is a big one, so consider that an idea of what you’re up against as you build a list of cars to consider.

Takeaway: is the 2017 Hyundai Santa Fe Sport worth it?

That Hyundai makes you pay as much as it does for advanced safety features is surprising, from a company that built its reputation on value, but the Santa Fe Sport is easy to like for its combination of interior space and easygoing over-the-road feel. The sport label is certainly misplaced on this car, but the Santa Fe Sport is anything but out of place among its crossover competitors as a comfortable family vehicle.

Chris Chasehttps://chrischasescars.com/
Chris has been writing professionally about cars since 2004, in print and online. He lives in Ottawa with his wife and two feline tyrants. In rare quiet moments, he can be found travelling or playing one of his way-too-many guitars. Chris is also a journalist member of the Automobile Journalists Association of Canada (AJAC).
FILED UNDER:
SUV and Crossover Reviews2017 SUV and Crossover ReviewsNew CarsCar ReviewsHyundaiHyundai ReviewsHyundai Santa FeHyundai Santa Fe Reviews

We take a closer look at each of Chevy's small SUV and crossovers including Trax, Trailblazer & Equinox. Plus, a look at the big ones, too.
Read more
Ford

The new Hyundai Santa Fe gets major redesign updates for 2021 - both inside & out. The SUV's interior now finds more space, features, and upscale feel.
Read more
SUV and Crossover Reviews

Buying a used small SUV or compact crossover is challenging with so many choices. Here are the best models to consider based on value, design & reliability.
Read more
Hyundai

If a 2020 Hyundai SUV is on your radar, know the difference between all 5: Venue, Kona, Tucson, Santa Fe & Palisade. We profile each with photos & features.
Read more
Kia

What's the difference between the Telluride and Sorento SUVs? Kia's two big sport utiities offer cargo, capability, and tech but are not alike in many ways.
Read more
Hyundai