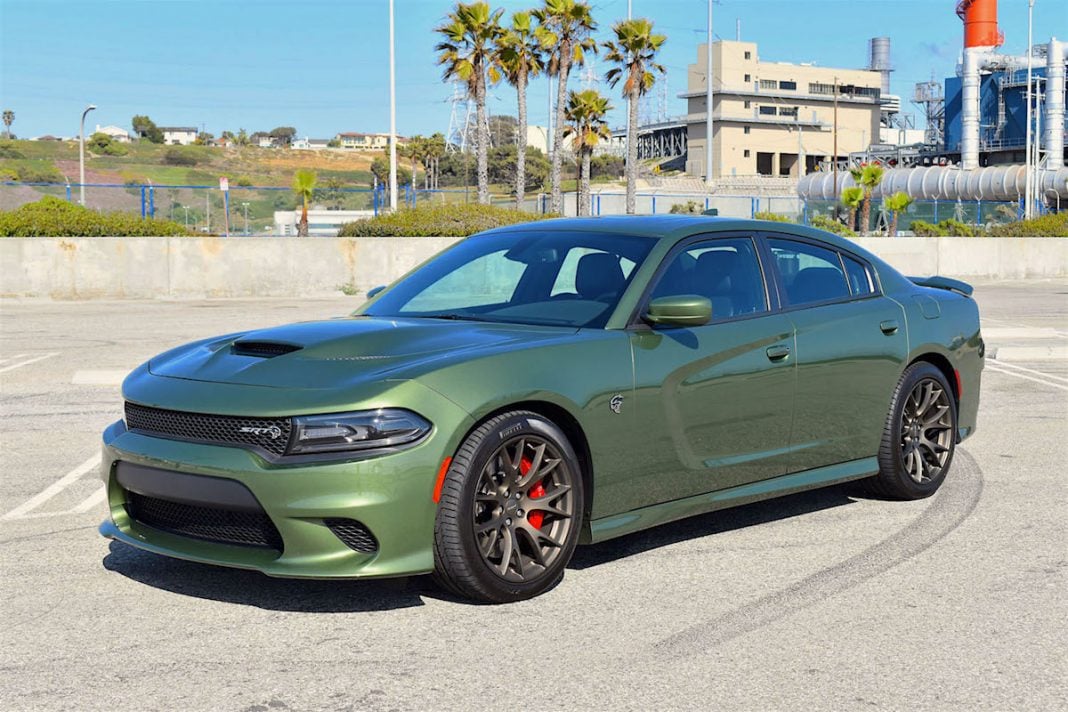 Los Angeles, California – At a time when cars look and sound increasingly alike and drivers are slowly being replaced by automated systems, Dodge’s 4-door Charger and 2-door Challenger SRT products are a throwback to a time when cubic inches and quarter-mile times were more important than safety systems or the latest infotainment trickery.

Like all Chargers and Challengers, the 2018 Charger SRT Hellcat that we recently tested in and around Los Angeles can trace elements of its underpinnings back more than a decade to the DaimlerChrysler era.

A lot has changed since then at what is now Fiat Chrysler Automobiles (FCA) but the Charger endures as a rare full-size sedan – and a V8-powered one at that – in a world of SUVs, like Dodge’s wicked fast 475-hp 2018 Durango SRT or the most powerful OEM SUV right now by Jeep.

And if you’re looking at the non-SRT version, check out New 2018 Dodge Charger: 13 Things You Need To Know

All 2018 Chargers get a Parkview rear back-up camera and Parksense rear park assist as standard. Our car’s subtle F8 Green is one of two new exterior colors along with IndiGO Blue. The beautiful Brass Monkey bronze wheels of the test machine (US$995, C$695) are also available on the SRT 392 as of 2018.

Lots of people loved F8 Green. Even in eco-conscious California, no one hated it, complained at the noise or shouted the kind of abuse that you might get in response to a more ostentatious ride. Pretty much everybody it seems, loves the Hellcat.

The important stuff is unchanged. Under the hood is the same 707-horsepower Hemi, making the Hellcat the world’s most powerful 4-door sedan. Rear-wheel drive, an 8-speed automatic transmission, Pirelli tires, Bilstein dampers and Brembo brakes are among the other ingredients of a family-sized vehicle that’ll hit 60mph in under four seconds and wake the neighbors every time you fire it up.

Dodge interiors have come a long way in 10 years and in the Hellcat, more work has been put in to try to create a premium ambience befitting of a US$66,295 (C$78,695) hot rod. Overall, it doesn’t hit the luxury heights of German performance sedans but it’s attractive, distinctive and leaves you in no doubt that this is an SRT machine. Only minor touches betray the Charger’s workaday origins, like the cheap-feeling trunk lid and its undamped opening mechanism.

The Charger’s front doors open a long way, which makes it easy to get in and out but, unless you’re Mr Tickle, hard to shut the door once seated. The seats themselves are big, soft and comfortable performance armchairs with heating, ventilation and lots of power adjustment. Their high-set position is appropriately more NASCAR than low-set European racer.

Forward visibility, especially when parking, is a little compromised by the huge power bulge that accommodates two heat extractors. Otherwise the view around is good and the new parking assistance tech works well.

The leather-trimmed steering wheel feels suitably chunky and the instrument panel is FCA’s familiar, reconfigurable, digital item. The standard Uconnect infotainment system was enhanced on the test car by a US$1,995 (C$1,500), 19-speaker Harman Kardon upgrade that sounds terrific to my non-expert ears.

Driving Impressions: How’s the 2018 Charger SRT Hellcat on the Road?

And so to the road. The overriding impression of the Hellcat on the move is that the engine dominates the car, for good and bad. First the good. The Hellcat was conceived to go very fast in a straight line. It does, obviously, but care is required as it’s easy to break traction even on part throttle thanks to 650 lb-ft of torque driving the rear wheels alone. Acceleration is ferocious, and not just from rest, with more overtaking shove on tap than just about anything else out there.

There’s an appealing, old-fashioned whine to the supercharger as it spools up to accompany the Hemi’s exhaust bark. A Jaguar engineer once told me that supercharger whine was now regarded as an error state and that they’d worked to eliminate it. The SRT engineers clearly take a different view, and a good thing too.

It has a singularity of purpose: being the quickest away from the stop light, or the Christmas Tree, and going very fast for comparatively little money.

The problem, for this reviewer at least, is that the chassis is forever fighting with the engine for control of the car, despite the sophisticated, adaptive suspension. Engine-induced shake is pretty uncommon above idle speeds in modern cars but it’s pronounced as you rumble along in the Hellcat. Add some steering into the mix – even a long, gentle, freeway bend at normal cruising speeds – and the car refuses to settle, always jiggling around instead of giving you the feeling of planted security.

There’s more, unfortunately. On uneven surfaces there’s head toss – a phenomenon that’s exactly what it sounds like, when you feel your head being thrown from side to side – and the admittedly punishing freeways around Los Angeles sometimes threw the damping into a tailspin. Over sections where the bumps and dips across the carriageway come thick and fast, the Hellcat once again won’t settle down, still dealing with the previous event even as you hit the next one. This was a problem with the Charger Scat Pack I drove on the same roads a couple of years back, and it remains an issue today.

In its defence, the ride on those gorgeous 20-inch forged rims and big P Zero summer tires (US$595, C$695) is never harsh and the Hellcat is surprisingly quiet and supple in the cruise. When the cylinder deactivation kicks in and the Hemi switches down to four cylinders, even the fuel consumption isn’t too awful, hitting an EPA figure of 22mpg on the highway, 16mpg overall.

Takeaway: Our Final Thoughts on the 2018 Dodge Charger SRT Hellcat

Most modern vehicles are all-rounders. Work trucks now cater to families. Jeeps are for everyday use as well as hardcore rock crawling. Mass-market sedans offer high-end features despite their value pricing. The Dodge Charger SRT Hellcat is not like these, nor pretty much anything else on sale. It has a singularity of purpose: being the quickest away from the stop light, or the Christmas Tree, and going very fast for comparatively little money. The Hellcat succeeds in this objective, no question, and deserves to be admired because of it, but you might want to look at elsewhere if ride and handling is your thing.

And there’s always the Widebody version of this sedan for some extra appeal.

Very few cars from the major brands elicit the response from passers-by, gearheads or otherwise, that I got during my few days with the Hellcat: smiles, thumbs up, pictures. A Ford guy with a taste for hot hatchbacks had tons of questions. Lots of people loved F8 Green. Even in eco-conscious California, no one hated it, complained at the noise or shouted the kind of abuse that you might get in response to a more ostentatious ride. Pretty much everybody it seems, loves the Hellcat.

Check out more of our Dodge Review here.

What others are saying about the New Charger SRT Hellcat:

The Dodge Charger SRT Hellcat breaks with the modern trend of downsizing and instead packs a supercharged V8 under its hood to provide supercar rivalling performance. It may not be the most refined four-door sedan around, with a hard ride and noisy cabin, but it handles well and offers a big-hearted V8 bellow that is addictive. – CarBuzz

It’s not a sports car per se, and it’s not going to compete with a Camaro ZL1. But it is a car that exceeds so many benchmarks for speed and has so many performance firsts for a production vehicle that it will long be tattooed into our subconscious as the car that defined Dodge. – Derek McNaughton, Driving