The new Honda minivan is here. So we had our two journalists – the dude with no kids and the family man minivan dad – put the top-end 2018 Odyssey Touring to the test, giving us their separate takes on the redesigned Japanese family hauler.

­We’re always a little surprised, these days, when an automaker rolls out a brand-new minivan. It’s been a long time since this super-practical vehicle type ruled the suburbs, and while many brands gave up on it in favour of crossovers and SUVs, a few persist and find success thanks to strong brand recognition.

Honda, one of the world’s most recognizable automakers, has redesigned its Odyssey minivan for 2018. The exterior changes aren’t groundbreaking, but it does sport a new face that shares elements from other recent Honda designs like the Civic and Accord.

Chris Chase: Dude with No Kids

Two of our contributors, including Chris in Ottawa, Ontario and Graham in Calgary, Alberta, both spent a week with the 2018 Odyssey. Graham hit the road with his family, experiencing the minivan to its full potential. Chris took the more urban approach, driving the Odyssey around town.

Would a guy with no kids ever buy a minivan? No, probably not. Ever. But it’s good to have two different opinions so you can buy your family’s next van with more confidence.

Not everything has changed: As before, the Odyssey gets its motivation from a 3.5L V6, but it’s now the all-new, direct-injected unit already seen in the latest Pilot. With 280 hp/262 lb-ft (up from 248 hp/250 lb ft in the old model), you’ll never run out of steam. In fact, I’d argue that the Odyssey is quicker than family-focused transport needs to be. The throttle response is surprisingly aggressive, too, even in Eco mode.

In our top-end Touring tester, the V6 funnels its power to the front wheels through a 10-speed automatic transmission. That Honda-built gearbox is exclusive to the Touring, with lesser trims using a nine-speed sourced from a German supplier, called ZF. We hope Honda eventually transitions all trims to the new 10-speed, which is a smoother shifter.

One of its traits is an aggressive first gear ratio that makes it impossible to move away in slippery conditions without unseemly wheelspin. Honda seems aware of this, and so fits the Odyssey with a “snow” mode that starts the van out in second or third gear (we couldn’t tell which) and dampens throttle response. It works well to help the front wheels find traction in snowy driving.

While the Odyssey has long been our favourite minivan to drive, with handling sharper than the class average, this new design somehow builds on that. It’s still as much fun to drive as you can get in this category, with responsive steering that (thankfully) lacks the darty on-centre feel of the setups in the Civic and Accord, and it does all that while offering a comfortable ride.

Through a combination of cylinder deactivation and an engine designed to shut off at stoplights, Honda promises fuel consumption as low as 12.2/8.5 L/100 km (city/highway), but cold weather and lots of snow conspired to kick our real-world average up to nearly 15.0 L/100 km.

In a week with the Odyssey in unseasonably warm, dry conditions that included a highway run to the mountains and lots of stop-start city use, I averaged right on the stated combined consumption figure of 10.6 L/100 km. I’d have traded some performance for lower fuel consumption. In Europe, turbodiesels provide a good blend of torque and economy in minivans like the Ford Galaxy; there’s no sign of diesels breaking through in this segment in North America, but perhaps the excellent Chrysler Pacifica Hybrid’s plug-in electric technology – with which I averaged 6.2 L/100 km earlier this year – provides a taste of things to come.

I found the van to be comfortable when cruising at speed. Unfortunately, in this Touring grade at least, which is fitted with 19-inch rims, it didn’t soak up low-speed lumps and bumps around town in the way I would expect for a vehicle that’ll see most of its service in an urban environment.

The Odyssey’s practicality translates to large exterior dimensions, although it’s only marginally longer and wider than before and almost identical in size to the Pacifica. You certainly notice them when parking. The turning circle is even wider than the outgoing model’s, but plenty of steering lock helps with maneuvering.

I found the van to be comfortable when cruising at speed. Unfortunately, in this Touring grade at least, which is fitted with 19-inch rims, it didn’t soak up low-speed lumps and bumps around town in the way I would expect for a vehicle that’ll see most of its service in an urban environment.

The active safety systems however, grouped under the Honda Sensing banner and standard across the range, are outstanding. In particular, the lane-keeping assist system looks at the road ahead and steers ahead of time to keep you in your lane, rather than waiting until you drift out before reacting. It’s not yet perfect – when salt obscures the road markings for example, the system can become confused – but by gaining the trust of drivers with technologies like this, Honda, like other manufacturers, is paving the way for the driverless cars of the future.

The Odyssey’s styling didn’t change much with this redesign; after all, there’s only so much you can do, looks-wise, without compromising a van’s practicality. Still, there are a couple of new character lines in the sheet metal, in addition to the kink in the beltline at the C-pillar carried over from the outgoing generation that gives way to swoopy rear-quarter windows that make the Odyssey look longer and sleeker.

Visually, there’s more going on here than in the old Odyssey. While we would call it distinctive rather than weird, the Chrysler Pacifica brings its own sense of style to this class in a package that’s a bit easier to digest.

Most noticeable upon hopping inside is a new dash centred around a digital gauge cluster and sporting a sharp central touchscreen for infotainment functions. We’re grateful Honda included hard buttons for the heated seats, but we would’ve appreciated a button to manually change vent settings for the climate-control system. If you want to choose where the air is directed, you must do so through the screen, which requires more steps than are ideal while driving the car.

The Odyssey will accommodate up to eight people, but the maximum capacity-to-comfort ratio is found with six passengers aboard. The front seats are obviously prime real estate, thanks to the heat and ventilation functions they get in Touring trim. In many three-row SUVs and crossovers, the second row might also get heated seats, but not here, likely because it would be too difficult to run wiring to chairs designed to be removable. However, the second-row seats do slide side-to-side, a neat touch that allows easier access to the third row. If you don’t mind being a bit chilly in the winter, both second- and third-row seats are quite comfortable, the third row surprising us with its generous leg- and headroom.

This is not the ultimate in minivan luxury, however. Kia has that concept nailed with its Sedona, which can be fitted with airplane-style reclining second-row seats with leg rests.

Chrysler does second-row stowability better than Honda, but the Odyssey has it nailed when it comes to the third row. The rearmost ‘Magic Seats’ are super-easy to fold away, revealing a cargo space that was long enough to accommodate adult-length skis without resorting to an economy-sapping roofbox. The HondaVAC remains a handy addition and stores unobtrusively in a side panel in the trunk.

Parents sitting up front can keep an eye on the kids behind via the CabinWatch camera system. Meanwhile CabinTalk is an intercom function that operates through the second-row Bluetooth headphones. No more turning around and shouting at the kids to turn off their screens!

No doubt about it, the Odyssey’s infotainment and connectivity package is cutting edge. I really liked the app-based touchscreen in the front, which makes functions easy to find. In the rear, it takes a different approach to the Pacifica’s seat-back screens and offers a fold-down, overhead widescreen. There’s a slight impact on the driver’s rear view but a plus is the 10.2-inch screen’s visibility to row-three passengers as well as those in row two. Web content can be streamed through a 4G LTE wi-fi connection.

What plays on the rear screen can be controlled from the dash, from a remote control, or via the Honda CabinControl smartphone app. The app also gives access to rear-cabin HVAC controls and for songs and navigation destinations to be shared with the vehicle. Using an Android phone, we found it to be easy to download and hook up.

Parents sitting up front can keep an eye on the kids behind via the CabinWatch camera system. Meanwhile CabinTalk is an intercom function that operates through the second-row Bluetooth headphones. No more turning around and shouting at the kids to turn off their screens!

Honda is back with another winner in a family-sized follow-up to the new Civic and Accord. Honda has done well to adapt the sharp driving feel for which those cars are known to the larger Odyssey, making it clear the company remains focused on producing a people-mover as geared to the person driving as to those along for the ride.

The new Odyssey majors on practical technology, enhancing the experience for both driver and passengers. It’s an excellent family car, but while its leading-edge driver-assistance and connectivity technologies offer a glimpse of the car of the future, it’s old-school powertrain configuration feels a little out of step with the times. 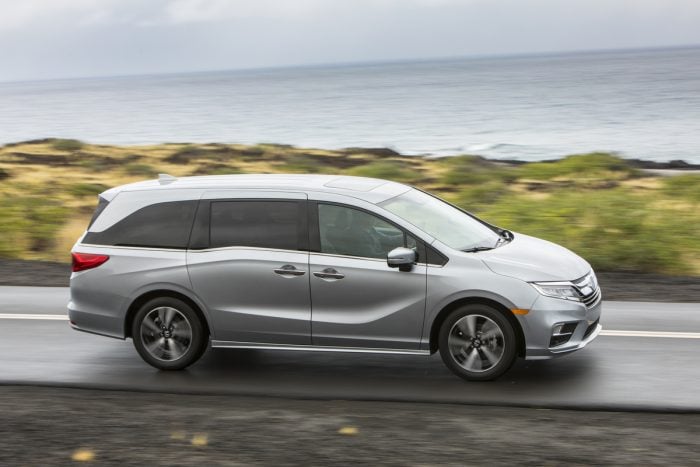 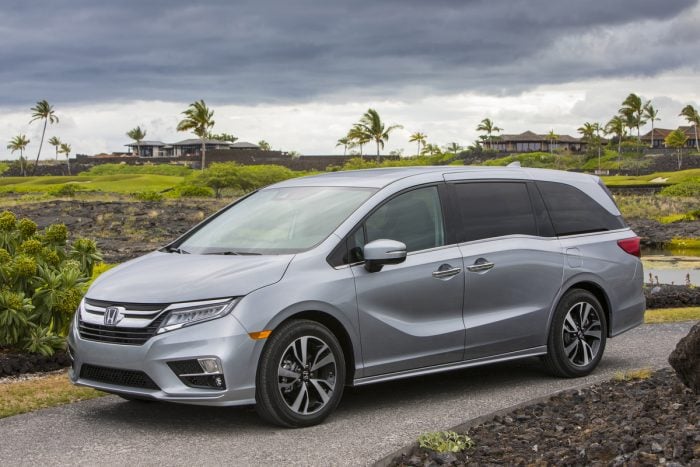 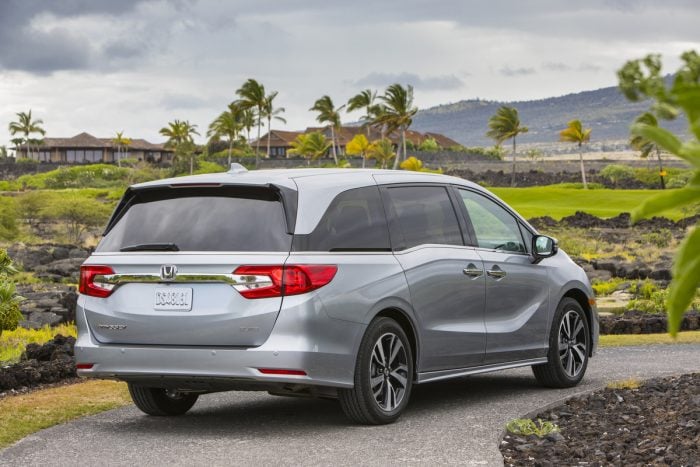 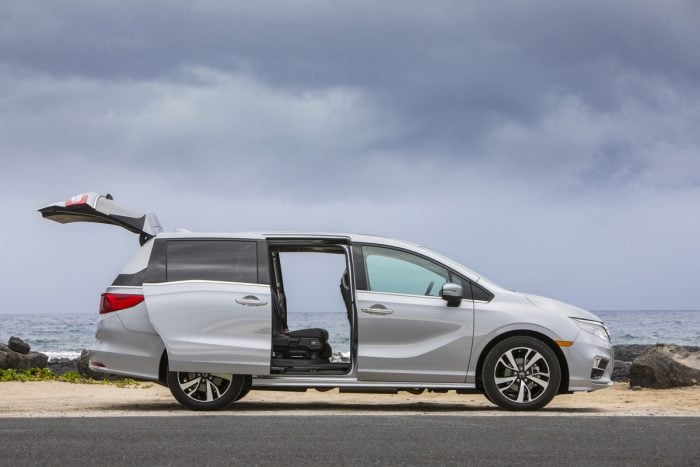 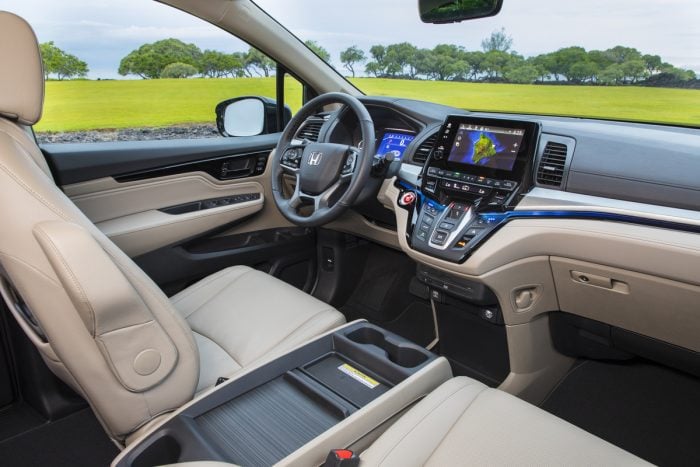 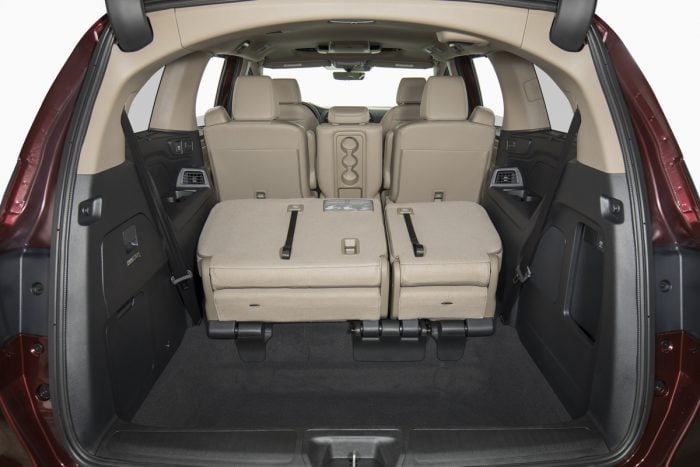 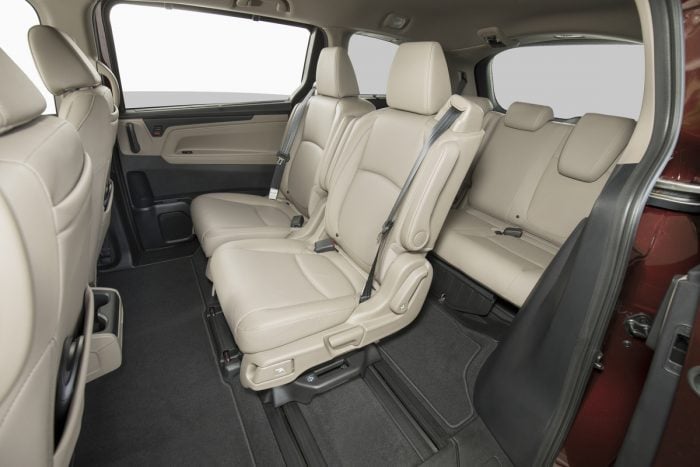