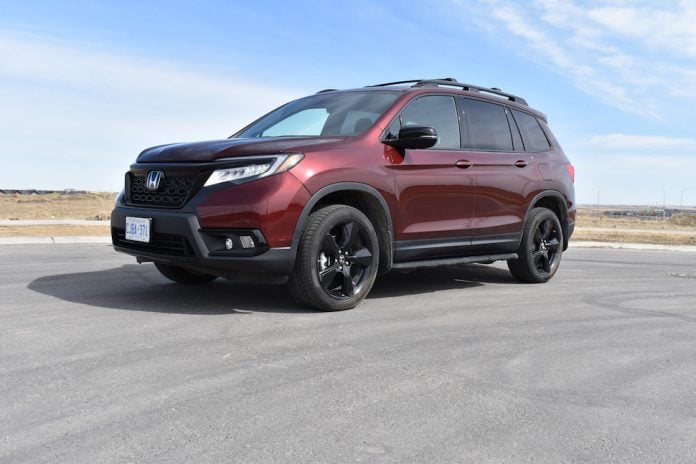 The 2019 Passport fills a new segment for Honda. This mid-size, 5-passenger SUV slots right between the big-selling CR-V compact SUV and the larger, 7-seat Pilot.

Passport is essentially a five-seat Pilot, sharing much of that vehicle’s underpinnings and even its wheelbase. Honda says that the Passport’s shorter overhangs and extra inch of ride height make it more suitable to off-road use than its longer sibling.

We spent a week with a Passport Touring, which is the most luxurious of the three-model Canadian range that starts with the C$41,990 Sport. At C$48,990, the Passport Touring costs around C$8,000 more than a CR-V Touring and almost C$6,000 less than a Pilot Touring.

In the US, prices rise from the US$31,990 Sport through the EX-L and Touring to the US$43,680 Elite – comparable in specification to the Canadian Touring, and the only US model to come with AWD as standard.

The passport has a low-key look. Honda points to the black bumper and grille as being indicative of the vehicle’s off-road prowess, but they didn’t stand out on our Deep Scarlet Pearl (C$300) test vehicle.

Its 20in rims (the same size as on all other grades) were also black but the gloss finish doesn’t chime with the off-road aspirations.

An optional Aero Kit (C$1,150) adds front and rear underbody spoilers, while a Utility Package (C$2,446) includes roof rack crossbars and running boards. These and other items are available in a range of packages in the US.

Overall, there simply isn’t much more to say. The Passport isn’t ugly, but it’s not drop-dead gorgeous either. It doesn’t look soft, nor does it scream ‘Jeep Wrangler’.

To our eyes, it just looks like a modern, mid-size SUV.

Honda regulars will feel right at home in the Passport’s roomy interior. Honda claims that cabin space is class leading; it certainly feels that way. The trunk is big, too.

Inside the full-loaded Passport Touring trim

The Touring is fully loaded, as one would expect. Specific to this grade are a premium audio system, wireless phone charging, ventilated front seats, a wi-fi hotspot and a hands-free power tailgate.

The black leather-trimmed cabin is comfortable and easy to use, like the Pilot’s. We liked the navigation’s interface and mapping, and there’s all the connectivity you’d expect from a high-end model: Apple CarPlay and Android Auto, a wi-fi hotspot and the proprietary Hondalink subscription-based services.

Related: What is Apple CarPlay?

We were less keen on the walk-away door lock system. It’s a useful feature, but the accompanying beeps may become irritating over time. If you don’t like it, the system can be turned off via the main display.

Honda has revised the 9-speed, which is now said to offer second-gear starts under moderate loads, smoother shifts, upgraded hardware and quicker response times. It’s well matched to the V6, making for a smooth and flexible combination, but the throttle response is frustratingly lazy, presumably in the name of fuel saving.

The transmission’s Sport mode keeps the revs higher but feels superfluous in a high-riding SUV that’ll spend most of its life in town. You quickly tire of the extra engine noise. More generally, it’s hard to imagine a situation in which you’d want to drive a Passport enthusiastically, especially when the steering is so unengaging.

The Passport drives like a lot of other mid-size SUVs in the market – easily, quietly and for the most part, comfortably, too. The big rims don’t deliver a hard ride, but it is lumpier than we’d like when the road surface is less than perfect. Body roll is well suppressed.

The steering is a little quicker than the Pilot’s but there’s so little feel for the road that it’s hard to get excited about exploring the claimed additional agility that results.

The Passport isn’t ugly, but it’s not drop-dead gorgeous either. It doesn’t look soft, nor does it scream ‘Jeep Wrangler’.

The Passport’s Honda Sensing driver assistance technologies are excellent, as good as any in the class, but the intervention of such systems can compromise overall steering feel; perhaps that’s happened here, too.

We didn’t have the opportunity to take the Passport off-road so are unable to comment on its ability there, but we’ve no reason to doubt Honda’s claim that the i-VTM4 AWD system helps the Passport to maintain traction on loose surfaces.

However, you’ll likely want something other than the standard, road-focused all-season tires for serious off-road work.

Towing with the Honda Passport

Takeaway: Is the new Passport worth it?

The last Honda to wear the Passport was the rebadged Isuzu Rodeo in the 1990s. SUVs are a great deal more sophisticated now and sell in far greater numbers. As a five-passenger, mid-size SUV, the 2019 Passport finds itself in one of the most competitive segments of all.

Honda has a strong track record in the unibody SUV market, though, and should have no trouble finding buyers for the Passport, which does little wrong. It’s spacious and comfortable, and the Touring is loaded with technology, but we struggled to find anything distinctive about the way that it looks or drives.

We’d recommend trying it for yourself and comparing it with rivals like the Ford Edge, Chevrolet Blazer and Hyundai Santa Fe.

A Jeep Wrangler with a V8 may be in the works if this Wrangler Rubicon 392 Concept is any indication. 450-hp, 0-60mph in under 5-seconds, lifted & more.
Read more