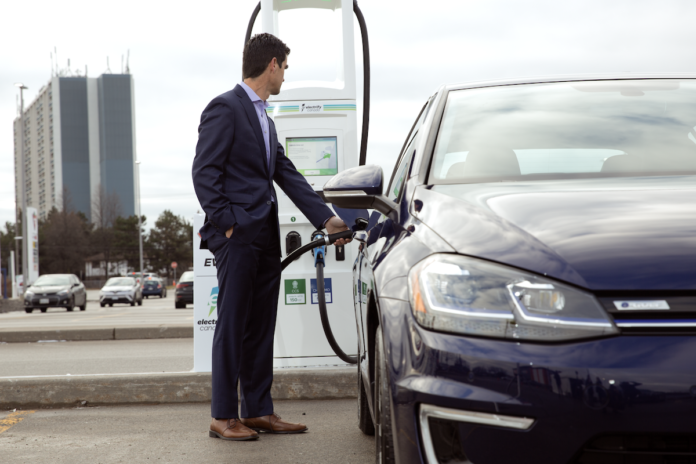 Vehicle sales in Canada have been hit hard in 2020 by the COVID-19 pandemic, including sales of battery electric vehicles (EVs). But EVs’ market share continues to rise, and sales numbers are expected to climb steeply in the coming years with a host of more affordable new models such as the recently announced Volkswagen ID.4 SUV.

Tesla has Canada’s biggest EV fast-charging infrastructure through its Supercharger stations but a number of other companies are addressing a growing market to keep the EV fleet charged up when away from the driver’s home or workplace, including energy company Petro-Canada and Electrify Canada.

Canadian utilities are getting in on the act, too. In June, Hydro Québec’s Electric Circuit network announced plans to add 100kW DC fast-charge stations. The chargers will be supplied by AddEnergie, whose own FLO network is also open to Electric Circuit users.

Access to Petro-Canada’s 57 locations across the country has been boosted by the arrival of a new app that provides information on the network and enables the user to manage charging and payment.

Petro-Canada has concentrated on the latest and fastest Level 3 chargers. The DC fast-charge market will be the focus of expansion for all the networks as more new vehicles become capable of charge rates of above 100kW. The Porsche Taycan is currently the fastest out there, at around 270kW, but Petro-Canada’s sites all offer up to 350kW via a CCS connection. 100kW CHAdeMO connectors – which also work with Teslas via an adapter – are also available.

“For now, we have an equal representation of the two types,” says Pat Lazenby, energy projects leader – strategy and development at Petro-Canada’s owner, Suncor. “We may find over time that it gets skewed more to CCS because it appears that most new vehicles being produced are coming with the CCS connector. That’s something we can change over time, but we didn’t want to make any assumptions up front.”

“We’re still in the learning phase but we’ll continue to enhance the network,” he adds. “We’re evaluating our options and want to make sure that we go to the right places next. We’re also assessing the other players entering the game.”

Pricing is another area in which the DC fast-charge market is evolving. Petro-Canada currently ranges from C$0.20/minute in Quebec to C$0.33/minute in Ontario and Alberta, with BC in the middle at $0.27/minute. Meanwhile Electrify Canada is revamping its pricing structure from October 5th. The company will continue to bill for time spent but based on two power levels, from 1-90kW and 1-350kW, rather than the previous three. It has also eliminated session fees and reduced rates for higher-kilowatt charging by more than 50%.

“We have developed a new pricing structure that is consistent, transparent and provides even greater value,” says Rob Barrosa, Electrify Canada’s chief operating officer. Under the new system, prices for charging at up to 90kW start at C$0.21/minute through the app-based subscription service; for up to 350kW, it’s C$0.44/minute.

In the longer term, Electrify Canada expects the Canadian market to follow the trend seen elsewhere for energy-based rather than time-based billing, with users being charged per kWh rather than for time spent recharging. “We think that’s ultimately the fairest way to charge the customer,” he adds.

Electrify Canada’s network expansion has been delayed by COVID-19 but expects to hit 32 stations by the end of 2020. The initial focus is on connecting major cities and corridors such as Vancouver-Calgary, as well as building confidence in EV owners’ ability to take their vehicles to recreation destinations such as Whistler.

“Accessibility, confidence and convenience are all important elements that consumers need in order to make the switch to electric,” Barrosa concludes. “We want to put the right technology and infrastructure into the market to address those consumer concerns, to get them into an electric vehicle and help drive the zero-emission vehicle movement.”

Lucid Motors not only released all 4 Air sedan trims but pricing as well, staring under $80,000 peaking at $169,000. Here's a closer look.
Read more
Mercedes-Benz

One thing the pandemic has exposed is our need to be close to one another. Small 5-door cars do it best. Here are some 2020 hatchbacks to get you started.
Read more

Chat with Alexander Pollich: CEO of Porsche Canada on the Future...