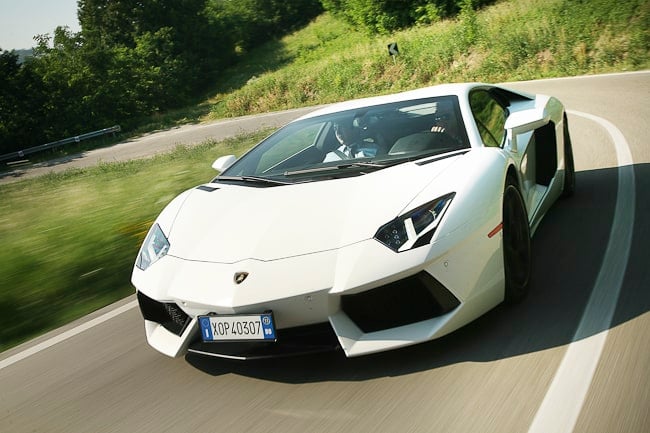 Sant’Agata Bolognese, Italy — Over the course of my time as an automotive writer, I’ve had the chance to drive three cars that I’d consider to be capable of truly stratospheric acceleration, braking and handling.

The first of these was a Formula One race car, specifically a car run by the now-defunct Arrows F1 team for former world champion Damon Hill in 1997. By the time I drove the car, some 10 years after that maiden season, the car had been fitted with a semi-automatic transmission and a less powerful engine. Despite the less powerful engine, the thing was still crazy fast and the brakes were even mightier, hauling the car down from high speeds in no time at all.

Second on the list was the 2010 Bugatti Veyron 16.4 Grand Sport, a serious super-car with a 16-cylinder engine that develops a near-even 1001 horsepower. Lucky me, I was given a scant 60 minutes to drive the car—and those 60 minutes were between the hours of 4 and 5 in the afternoon in the Lawrence/Don Mills area, one of the most congested in Greater Toronto. Once behind the wheel, I immediately sent the Bugatti blasting towards its claimed top speed of 407 km/h. Sorry, scratch that—this was the part of the test drive that took place in my mind. In reality, I eased the car into the middle of an expected traffic jam and crawled along at less than the speed limit in utter frustration.

Number three: The 2012 Lamborghini Aventador LP 700-4. During a quick trip to Lamborghini headquarters outside of Bologna, a bunch of lucky sods learned all about the processes that go into the production of the much-loved Italian super-sports cars. Then, we had the chance to unleash their latest creation on public roads.

Here’s the upshot: The Aventador is, yes, crazy fast. The car’s 6.5-litre, V12 engine cranks out 700 horsepower; although this figure is a staggering 301 horsepower down on the Bugatti, the Lamborghini’s performance off the line is in the same category. One hundred kilometers per hour from a standing start appears in a flat-out ridiculous 2.9 seconds and top speed is a nearly-as-absurd 350 km/h.

Here’s the upshot: The Aventador is, yes, crazy fast. But the secret to the Aventador’s dynamite character is that the car is not just a great, huge engine stuffed into a wedge-shaped body. First, that body is infused with carbon fibre, the ultra-lightweight and very strong material that was first employed on the space shuttle. Similar power plus lighter weight equals greater performance. In addition, the Lamborghini is fitted with an all-wheel drive system, a super-fast automated manual transmission, F1-style pushrod suspension and various other electronic gimmicks designed to ensure that the car’s significant power is accessible and is always generating forward momentum. The result is a level of performance that is so far beyond the ordinary, it turns public roads into a completely inappropriate venue for exploration—kind of like the proverbial bull in a china shop.

This doesn’t mean to say that I found the Aventador to be unwieldy while driving along the narrow ribbons of tarmac in rural Italy—in fact, although the car is very wide, its sightlines are a bit tricky and it has 700 horsepower, it was a very simple thing to keep it pointed in the right direction at, shall we say, elevated speeds.

The car features three driver-selectable settings that alter the engine, transmission, steering and stability control characteristics—strada (road), sport and corsa (track)—and picking the tamest of the three sets up an experience that’s equally as simple as selecting ‘D’ on your mother’s Honda Accord, if nowhere near as mundane.

One hundred kilometers per hour from a standing start appears in a flat-out ridiculous 2.9 seconds and top speed is a nearly-as-absurd 350 km/h. Unfortunately, without access to an unlimited-speed freeway or a closed racetrack, my time with the Aventador was not as exciting as it could have been. Sure, I enjoyed the thunderous roar of the V12, relished the reassuring clunk of the transmission and marveled at the capacity of the all-wheel drive system to generate impressive cornering forces. But I pushed the car to just 160 km/h—traffic conditions were, again, the culprit—and came nowhere near to verifying its promise as a world-class super-sports car. Ah, well: next time. Aside from its impressive performance credentials, the Aventador also has some outrageously cool features, such as the doors that open scissor-style (a Lamborghini staple), the slick TFT-LCD instrument panel and the engine start button, which has been placed under a jet fighter-style latch for extra-racy effect. Then, of course, there’s the exterior styling, which is unlike anything on Earth and, most likely, any other planet as well.

Long story short, the 2012 Lamborghini Aventador is a very extreme car in all respects—little wonder when prices start at $410,000—and I can’t wait for a proper chance to explore the extremities.

Mark Hackinghttp://www.markhacking.com/
Mark Hacking is an award-winning car, motorcycle and motorsports journalist whose work has appeared in Azure, enRoute, Intersection, NUVO and Toro, among many others. He is the former editor of Performance Racing News, the former managing editor of DRIVEN, and a member of both the Automobile Journalists Association of Canada and the Motor Press Guild of California. An avid racer, Mark is a three-time podium finisher at Targa Newfoundland and, this past season, raced in the VLN Series at the Nürburgring with the factory Aston Martin team. His motto in life: Drive fast, take chances.
FILED UNDER:
2-Door CoupesLamborghini Coupes