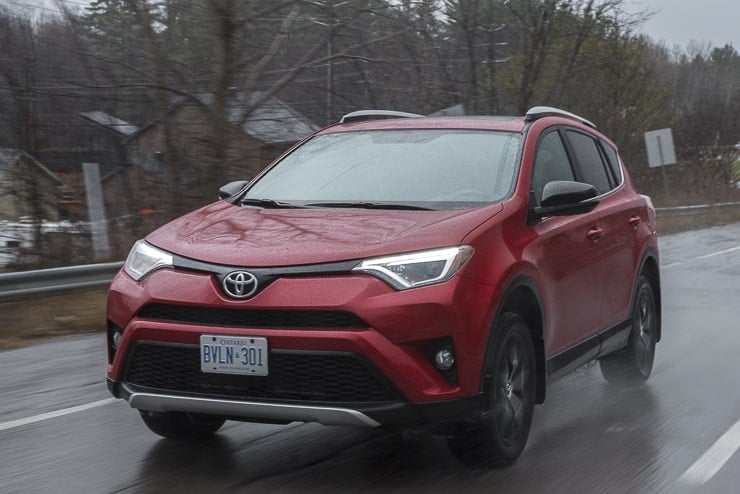 Ottawa, ON – What’s more popular than celebrity selfies and cat videos? That’s right: the small utility vehicle market. From crossovers to compact SUVs the small utility segment is exploding and nearly every automaker today is in the game as consumers continue to veer away from the traditional sedans and full-size sport utilities in lieu of smaller, affordable, yet off-road capable vehicles offering more cargo.

But kudos to Toyota for first introducing the RAV4 20-years ago, essentially creating this new category of vehicles long before the bandwagon rolled in. And for 2016, the facelifted RAV4 finally goes green, offered in an all-new hybrid version which Toyota believes will be their best-selling hybrid vehicle. We believe them. The all-new RAV4 Hybrid is built around a Toyota Hybrid Synergy Drive that’s been uniquely optimized for this compact SUV, with a 2.5L four cylinder Atkinson cycle engine, high-torque electric motors and continuously variable transmission. This combination delivers best-in-class City and Combined fuel efficiency of 6.9 and 7.2 litres per 100 kilometers, respectively.

Aside from the new powertrain, the 2016 Toyota RAV4 gets a little facelift from its redesign introduced two-and-a-half years ago. The ride is now smoother and quieter and the cabin finds new materials adding a more premium feel. The new 2016 RAV4 also finds more standard options over the outgoing version; plus, Toyota’s new pre-collision detection system will be first available in this new 2016 RAV4 Hybrid. On the outside, the updated 2016 model also finds new headlights which look a little sleeker; 17-inch hybrid wheels; and now 5 wheel design choices opposed to only 3. New colours are also available and the new shark fin antenna adds some style. The big black plastic chunks often found in compact utilities need to go. Fortunately, the new RAV4 refresh includes a colour-keyed rear bumper and a more integrated lifegate garnish – small details which make a huge impact in terms of a more premium look.

Inside, the RAV4 finds new colour choices, a new heated steering wheel, a new instrumentation cluster with multi-display, plus a height adjustable liftgate in 6-steps. The cabin is also more comfortable now with a floor silencer to drown out any undercarriage road noise.

But kudos to Toyota for first introducing the RAV4 20-years ago, essentially creating this new category of vehicles long before the bandwagon rolled in. And for 2016, the facelifted RAV4 finally goes green…

For performance, the 2016 RAV4 receives an updated tuned suspension, pre-torque control which was previously only available in Sport mode, and a bump in horsepower with better acceleration from the outgoing model. And all-wheel drive comes standard in the new Hybrid RAV4. We like the new RAV4’s more substantial appearance, but that look hints at a driving character that’s less refined than the outgoing model.
Read more
Kia