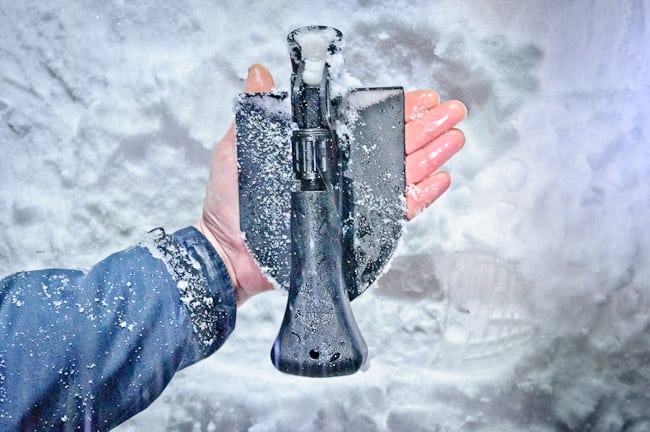 Compact ‘n Tough: We put the Gerber Gorge Folding Shovel to the test in real conditions

Winter is upon us folks, and it’s time to get used to digging your vehicle out of the snow again. Like it or not, at some point you are more than likely going to get stuck when the white stuff strikes hard. So, do the sensible thing and carry around a snow shovel. Of course, a big ‘un would be the first choice, but let’s take a look at a foldable, small version you can just throw in the trunk of your car and forget about… until it snows that is! Let’s take a look at the Gerber Gorge Folding Shovel. The Gorge is made by Gerber, and as Gerber are well-established in making awesome multi-tools and knives, the Gorge has a lot to live up to. How’d it do? We’re reviewing this from the perspective of a car owner, and not a hiker so the weight makes no real difference. For your information though, it sits at 28 ounces or .79 of a kilogram so it is not particularly heavy or cumbersome.

The spade-head looks to be made of steel, and the main shaft appears to be metal but is really glass-filled nylon with a rubbery grip, so it is weighty enough to do some damage should you either A). want to take out the abominable snowman, or B). want to dig yourself out of some snow in a hurry.

The Gerber Gorge In Action

The Gerber Gorge folds down small. In fact collapsed it’s a mere 9.25 inches (23.5 cm) long! This is one tiny spade, and the beauty is it will quite literally fit into the door pocket of your truck, or tuck nicely into the spare wheel under the trunk. Fold it out and you’re looking at an overall length of 16.5 inches (41.9 cm), and a spade head which is just four and a half inches across and six long. Not exactly a huge snow-plough-like size then eh. Go buy yourself a huge plastic sidewalk clearer if you want that though, we’re checking out this wee beauty precisely because of that small stature!

We’re reviewing this from the perspective of a car owner, and not a hiker…

Using this good lookin’ piece of kit is easy, and it’ll only take around 15 seconds to fold it into the position you want. On that note, you can fold the spade head 90˚ to turn it into a pick, for shifting hard-set snow or ice. Another useful feature is that folding the head back 180˚ and pulling around a square piece of patterned metal gives you a ‘hammer’, which is designed for knocking in tent pegs, but again, would be useful for cracking ice into pieces.

To use the Gerber Gorge, simply pull the extending handle until it clicks into place, spin the large plastic nut until you can fold out the shovel head to the position you want, and re-tighten the nut. Simple, easy and quick, and can be done while wearing gloves too.

Any negatives here? Yes, the small shovel head doesn’t exactly allow for moving huge amounts of snow in a hurry, and the short handle and shaft give little grip for the ‘normal’ digging position. However, The compact size of the Gerber Gorge allows for access under the side sills and bumpers of cars of normal height, which is really handy for getting the powdery stuff shifted from directly next to your tyres. It’s also much ‘safer’ than using a big, cumbersome spade next to your beloved paintwork.

Yes, the Gerber Gorge is tiny, but its size was designed specifically small enough for backpacking or military use; for digging your toilet in the desert, or moving enough sand quickly out of the way to shelter from flying bullets in a hostile environment. The Gorge is has a cool design, is well made and has multiple uses. If your vehicle is regularly snowed-in, get a normal shovel, but if you want something compact and handy for when you’re on the road, the Gerber Gorge is well worth a look! 7.0/10 Swedish designer SVORN transforms the ordinary into something less mundane. We get our hands (and keys) on the Arcus Carabiner at $39.95 US.
Read more