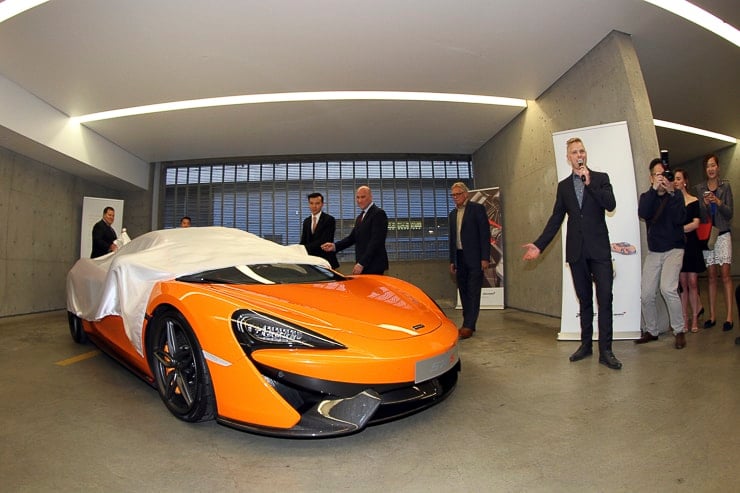 Vancouver’s Gastown historic shopping district is noted for its art galleries, exclusive shops, and fine dining establishments, so it comes as no surprise that McLaren Vancouver selected the district as the setting to unveil the British marques latest offering, the stunning 570S.

InForm Interiors was the place to be on Tuesday evening as evidenced by the long line of exotic automobiles that snaked their way over the cobblestone street before depositing their fanciful occupants at the entrance to the fashion-forward furniture gallery.

The crowd had assembled at Inform to get their first look at the McLaren 570S, the brand’s new entry model that had just made its global debut at the New York auto show, followed by previews in Toronto and now Vancouver.

The first car to be produced for McLaren’s new Sports Series, the 570S is powered by the latest variant of the same potent 3.8-litre twin-turbo V8 engine as used in the stunning 650S and pinnacle model, the P1. The car is rear-wheel-drive and layout is a rear-mid engine configuration. Horsepower is a healthy 562 and torque is 443 foot pounds. The transmission is a 7-speed dual clutch automatic gearbox, and the car features a full carbon-fibre tub to keep the weight in check and provide optimal passenger safety.

The car will be priced around the $200,000 mark and has been designed to target rivals such as the Audi R8 V10 and the Porsche 911 Turbo S with regards to both features and performance.

Invited guests were free to browse throughout the stunning store while sipping McLaren signature cocktails, featuring the brand’s speedmark, and tasty hors oeuvres.

Just after 6 o’clock the enthusiastic crowd assembled in Inform’s private garage, where McLaren Vancouver’s general manager Morris Lubinich delivered a welcome speech before the striking new car was unveiled by Pfaff Auto’s Chris Green who gave a brief overview of the model and how it will transform the sports car segment.

Judging by the wide-eyes and breadth of the grins and smiles on the faces of members of the excited audience as they swirled around the dynamic 570S exploring its every fold, crease, nook and cranny I think it is safe to say that McLaren’s latest offering will help the boutique auto builder establish itself as a powerhouse in the Canadian marketplace in no time.

Russell Purcellhttps://www.flickr.com/people/autoexposurecanada/
Russell Purcell is an award-winning automotive journalist and photographer based in Vancouver, B.C. His passion for automobiles was sparked at the tender age of six, when a family friend gave the wide-eyed first grader a ride to school in a track prepared Porsche 911 RSR. He continues to fan the flames by building an impressive library of automotive related books as well as a vast collection of interesting automobilia and motoring artefacts. Russell is a member of the Automobile Journalists Association of Canada, and is active on Twitter as RoadTestRuss.
FILED UNDER:
CultureMcLarenAuto NewsMcLaren News

Does Mercedes-Benz Really Own The Ice? A Closer Look at the...

2011 Kia Sportage SX Turbo Review: Escaping the Tourists with a...