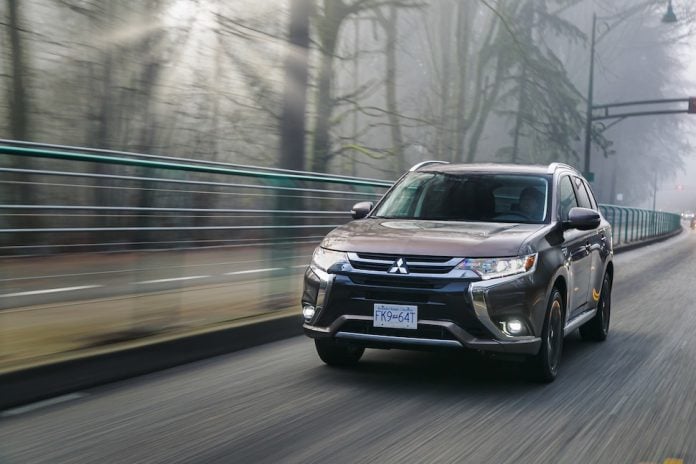 Mitsubishi sold more than 5,052 Outlander PHEV models in 2018, which the company says is the first time a plug-in hybrid has surpassed 5,000 sales in Canada in one calendar year (5,270, to be exact).

If that number surprises you, it should. And it shouldn’t.

It should, if only because if any carmaker was going to do that, I’d not have guessed it would be one of the country’s smallest. It shouldn’t, because the Outlander PHEV is actually pretty darn good.

First, aside from the badging, clues that this is any different from the gas-powered Outlander are few: there’s the extra filling door on the passenger side for the charging port, the shifter is a joystick instead of a traditional PRNDL stick and the instrument panel has details on the powertrain the gas model doesn’t. It’s the same vehicle in terms of passenger and cargo space, with the battery pack hidden beneath the floor and the electric motors under the hood and on the rear axle. The cargo floor may be an inch higher, but you don’t notice it.

There are a few things Mitsu could do better inside, and that’s integrating components better. It’s a minor thing, I’ll admit, but having the odd outlier button or knob or control that’s not anything like the others screams of parts-bin raiding.

The touchscreen display for audio control is quite busy, and the crowded placement of control areas means you need to concentrate on the display when doing something. It does have an actual volume knob. A tuning knob as well would be perfect. For average daily use, it’s extremely economical. My second chance to drive one was in Truro, N.S., where my son and I spent a week competing in the Canadian National Archery Championships. Our daily driving was about 30 kilometres a day and the hotel featured a free CHaDeMo charging station: 25 minutes of charging and the battery was full.

When we didn’t leave Truro, we didn’t burn gas, or at least burned so little it didn’t move the fuel gauge at all. It’s that simple.

And when we did drive to Halifax or to Peggy’s Cove, we did so quite economically. The first 30 kilometres or so was entirely electric, and then we averaged about nine litres per 100 km once the gas motor kicked in. Even when I thought it was getting thirsty, having drained seven-eighths of a tank, the resulting fill-up was a surprise: only about $40. Outlander PHEV operates in three different modes: electric, where it behaves as though it had only electric power; series, which it also known as range-extender mode, where the gas engine does nothing but power the generator to provide electricity; and parallel, in which the gas and electric motors share propulsion duty.

There are a few twists worth noting, as well. If you know you’re going to be on the highway for a while and want to run in EV mode when you get into a city, you can select “save” mode, which minimizes battery exhaustion. It’s perfect for highway driving, where the benefits of any hybrid evaporate very quickly, but preserves hybrid functionality for when you reach another city, where hybrids shine.

“Charge” mode will use the gas motor to charge the battery, either while parked or while driving. Again, it helps on the highway where you can restore some of the EV capability for when you get into a city. The PHEV also provides a variation on Mitsu’s Super-All-Wheel-Control system: in gas vehicles, this system operates with driveshafts and clutches to send torque to the four wheels in varying proportions. In the PHEV, the gas and main electric motor are connected to the front wheels only. An electric motor on the rear axle provides rear-wheel torque when needed, and a computer directs torque from side-to-side as needed.

You can engage 4WD Lock, which even in the PHEV, which has no mechanical link between front and rear axles, simulates locking the centre differential.

So, how does it drive?

First, forget everything you thought you knew about Outlander. Yes, the original model to use this body had atrocious handling, with what I’m guessing was severe rear sub-frame flexing that made hard cornering quite the collection of sphincter moments.

Those days are long gone: the Outlander now rides and handles as well as any mid-size SUV in its class. The seats are comfortable, vision is excellent and the interior design is quite well done.

Does the Outlander PHEV save so much money in fuel you should choose it over, say, a Honda Fit or Mazda3? No. The economics just don’t work out. Where it does make sense is if you’re already shopping in the mid-size SUV market: many models with similar prices won’t come close to its fuel efficiency.

Now do I have your attention?

What others are saying about the hybrid Outlander:

“Well-launched into its strategy of orienting itself mainly to SUVs and electric mobility, Mitsubishi is certainly offering an interesting and competitive product, especially as many of its rivals are not necessarily aiming at the same target market.” Vincent Aube at Auto123

“Mitsubishi’s technology flagship, the Outlander plug-in hybrid, has arrived in the United States nearly five years after it was originally due. The vehicle itself might look rather dated but the technology within is most definitely not.” Bengt Halvorson at Car&Driver

“The Outlander PHEV is a comfortable ride with good performance. We liked the way it treats its drivers by letting them choose the mode they want or letting the vehicle’s intelligence system do all the work.” Nicolas Zart at CleanTechnica

Note: for the purposes of calculating electricity costs, ignored was the basic monthly charge, which everyone pays anyway.

The O.G. of SUV wagons enters its 6th-generation with a complete redesign. Here's a (much) closer look at the new, tech-savvy Outback
Read more
Gear

With the hunting and fishing crowd in mind, Chevy teams up with camo brand Realtree on this special edition Silverado Trail Boss - their second collabo.
Read more