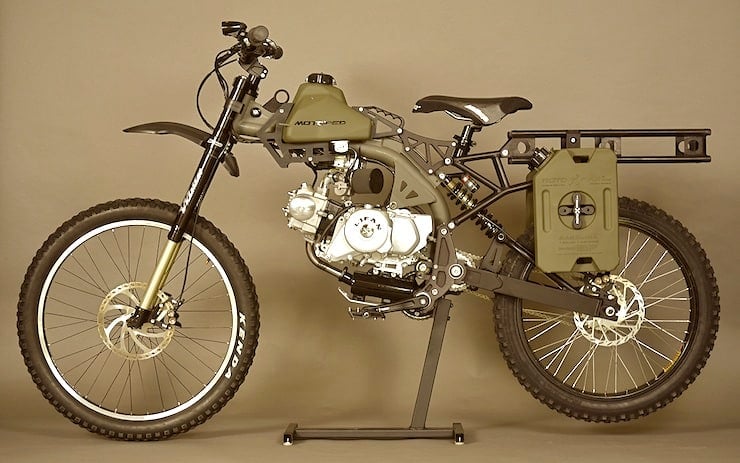 Survive the Apocalypse with a Motoped Survival Bike

Everyone has at some point thought about how they would survive if the apocalypse occurred. Where they would go for safety, what items they would bring, who they would take, etc. But very few think about what bike or vehicle they would use.

With a Honda XR/CRF50 engine and downhill mountain bike parts, the Motoped Survival Bike is decked out with Zombie-defeating features including: Aside from crossbows and knives, the Motoped Survival Bike is fuel efficient too, getting between 90-120 miles per gallon. If you’ve watched even one episode of The Walking Dead you know that extra features like this can be the difference between life and death so the more items and features you can have on a bike the higher your chances of survival are.

Pricing for the ultimate survival bike can range from $1,999 and up depending on options and engine size. Motoped has certainly stepped out of the box and taken survival preparation to the next level by creating a bike entirely focused on helping its rider stay alive. Amen to that. Honda Goes Bananas & Brings Back the Monkey for 2019

You’d be forgiven for thinking that the 2019 Honda Monkey was actually from the 1960s at first glance. It’s not by accident. Here's a closer look.
Read more

The Honda SuperHawk: Bring Japanese Bikes to the Masses

Honda Goes Bananas & Brings Back the Monkey for 2019