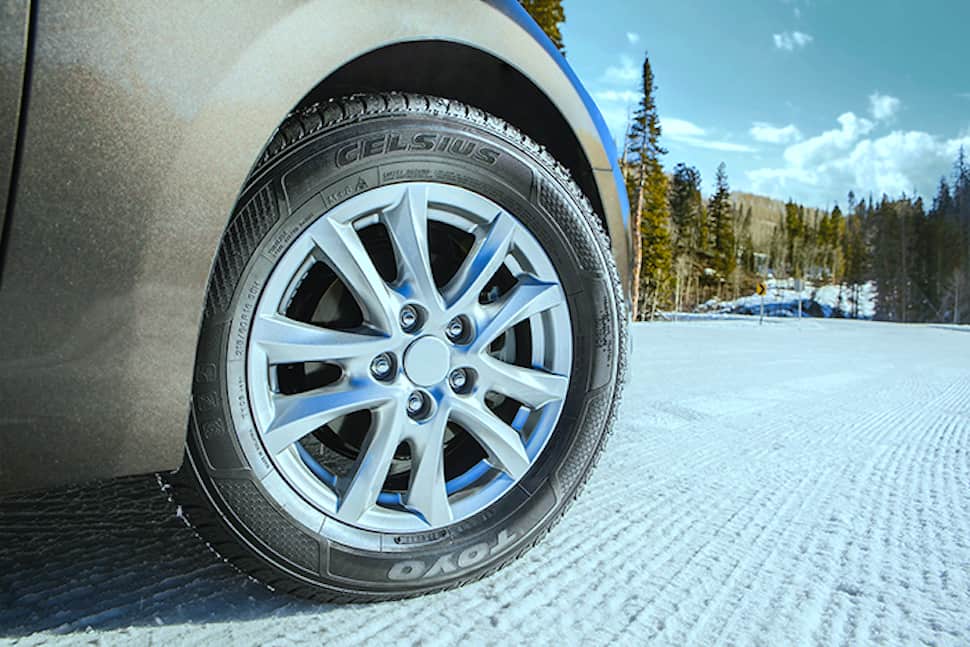 Buying, installing, and storing winter tires may not be economical or practical for most drivers during the cold months – but that’s where all-weather tires offer a good compromise for those looking for one set that will perform 365 days of the year.

One of the most common reasons drivers resist buying winter tires for their cars is that they can’t get past the cost of buying a second set of tires and dedicated wheels to mount them on. It’s a purchase that can easily run higher than C$1,500 for the SUVs and crossovers that serve as daily drivers for many families, and that expense can be hard to justify on a tight budget.

A couple of years ago, Toyo introduced a tire it hoped would address those budgetary concerns. It’s called the Celsius, and its maker calls it an all-weather tire designed to be well-suited to year-round driving.

True winter tires are molded from soft rubber compounds designed to remain flexible below 7 degrees Celsius, the temperature at which all-season tires begin to stiffen up and lose the ability to maintain a good grip on clear pavement. They also sport tread patterns engineered for better grip on ice or loose snow, with many tires forcing drivers to choose proficiency on one surface over the other.

The winter tire cost conundrum is not limited to drivers who feel all-season or all-weather tires are good enough for 365-day-a-year driving. It seems just as tempting to buy winter tires and drive on them year round instead. In Ottawa, just across the river from Gatineau, Quebec and that province’s mandatory winter tire law, we notice a number of Quebec-plated vehicles riding on winters all the time, but that soft rubber isn’t meant for use in warm weather, in which it wears quickly and can make a car’s handling feel unsettled. Toyo’s idea was to come up with a tire that represents a compromise between those two positions. We wanted to see how well that worked, so we took delivery of a set of Celsius tires sized 205/55 16 and put them on a 2010 Mazda3 Sport.

The Celsius wears a more aggressive tread pattern than the all-seasons our Mazda uses the rest of the year, with plenty of chunky tread blocks to help with deep-snow traction and zig-zag cuts (or sipes) that give more grip on ice and packed snow. But those appear on only two-thirds of the tire, with the balance composed of a tamer tread. This tire quite literally splits the difference between a winter tire and an all-season.

We got our tires right before the first snow fell in 2016, so we dove right in to see how the Celsius handled winter’s worst. We’ve reviewed a lot of cars fitted with a wide variety of winter tires, and our initial impression is that the Celsius also splits the difference performance-wise between the best and worst dedicated winter tires we’ve used.

The winter tire cost conundrum is not limited to drivers who feel all-season or all-weather tires are good enough for 365-day-a-year driving. It seems just as tempting to buy winter tires and drive on them year round instead.

There’s decent grip in loose snow, with the Celsius working well to pull our Mazda through several inches of freshly fallen white stuff on side streets, but we’ve tested other tires that worked better in the nasty, slushy stuff snow turns into on more heavily-traveled arterial roads.

Winter tires have been proven to improve grip on ice and packed snow, but that’s academic when you’re out and about in the aftermath of a freezing rainstorm, a common event in Ottawa’s winter of 2016–2017. That’s where the Celsius seemed least proficient, with ice traction that, by the seat of our pants, didn’t feel a lot better than with all-season tires.

Once the weather warmed up and the snow melted away, we discovered the Celsius performs solidly on clear roads, offering good cornering grip when we drive the Mazda3 in the spirited manner it was meant for. Mazda’s popular compact is not a quiet car to begin with, but to our ears the Celsius generated more road noise than the all-season tires it wore before, especially when the rubber stiffened up in the cool but snow-free parts of spring and fall.

Our experience shows the Celsius is a good all-around tire, but its performance is exactly the compromise you’d expect from one that’s designed to be used 365 days a year. As strong an all-around performer as it is, it strikes us that Toyo’s ultimate goal with the Celsius is to sell tires to winter-rubber resisters. We would recommend the Celsius to those drivers, if only to get more cars plowing through winter on tires that are at least somewhat suited to the conditions. Given our experience in Ottawa’s typically snowy and icy winters, though, we still endorse the two-tire approach for those living and driving in similar climates: choose a set of dedicated winters with more bite in the deep, slushy stuff, and an all-season or summer tire for quieter running and sharper handling on clear roads.

But the reality is, for the majority of consumers (not bound by law, yet) buying a new set specifically for winter isn’t feasible – that’s where all-weather tires come in, offering the ideal compromise, and ultimately, a safer driving experience during the cold, slippery winter season.

Tire Recycling: Why You Should Be Discarding Old Tires

When to Replace Tires: 3 Things You Should Know

Tire Rotation: Everything You Need to Know

We put the X-Ice Xi3 winter tires to the test on both icy conditions & snow covered roads. Are Michelin's premium snow tires worth the extra money?
Read more