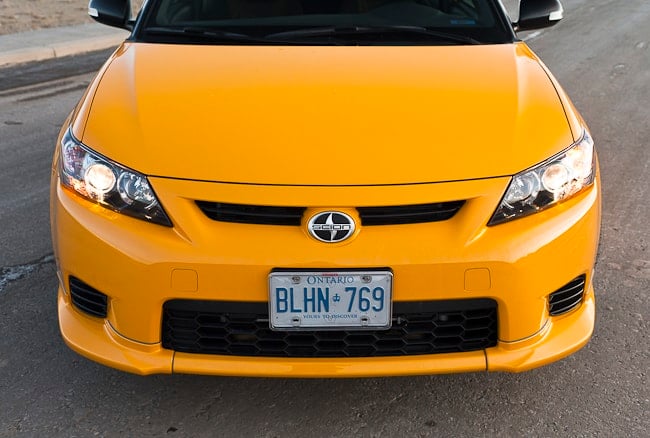 Okay. Here’s the thing. When you’re in the business of ‘selling cool,’ particularly when attempting to resonate with the younger demographic, you run the risk of trying too hard. And in today’s marketplace where ‘being cool’ is not only imperative, it’s an ever-changing, dubious force where brands get judged everyday and disowned quicker than your red-headed step-brother, companies need to stay on their toes and keep up with the times if they wish to remain relevant.

Scion, first introduced in the US in 2004 and in Canada as recently as 2010, has been pushing the small-car concept all these years, with the same branding and marketing. This all begs a few questions: when Scion’s R&D works on the 2014 models today, will these products still be sexy by the time they hit market? (Hence, is the 2012 Scion relevant today?) When Scion entered the market almost ten years, amidst the Tuner-car hype, clearly targeting Generation-Y with a strong focus on Scion’s customizing options, is this same strategy working today, where Fast & Furious is more Fast & Fizzled-out? Thus, is Scion behind the times? I.e. entering the Canadian marketplace so late? Perhaps Toyota has it all figured out and I’m simply out to lunch (happens often). Nevertheless, the idea of a car manufacturer attempting to delve into the minds of Gen-Y hipsters gives me anxiety. But I digress.

Marketing strategies and branding issues aside, Scion makes some neat little cars, and the 2012 Scion tC Release Series 7.0 is no exception. Starting at $20,940 CDN MSRP, this High Voltage edition is powered by the same 2.5-litre, 4-cylinder engine found in all other tC versions (and Toyota Camry), making 180-hp and 173 lb.-ft. of torque. Seeing as this a ‘special offering,’ a turbo would have been nice. The tC also finds FWD and Traction Control (TRAC) with on/off switch. On the streets, the RS 7.0’s High Voltage Yellow paint scheme will certainly garner attention. The idea of a ‘yellow car’ may not fly with everyone, but the tC pulls it off. Styling cues include long, straight lines running the length of the car, providing a more boxy yet sleek look. A TRD body kit adds some flair while 18” rims in gloss black finish look sharp against the yellow. Again, with only 175 available in the counrty, the 2012 Scion tC Release Series 7.0 could see a few more differentiating styling features, like a pair of sporty fog lights. Options on this tC include a $1050 automatic transmission with Gate-Type shifter, and the Release Series 7.0 Package at $2485 which includes the 18” wheels and the Push Button Start. $3535 in options, brings the total (before taxes/fees) to $24,475 CDN MSRP.  So, without the Release Series 7.0 Package (rims and start button), this ‘special edition’ tC is arguably a, well, a Scion tC. Frankly, I don’t get it. Overall, the 2012 Scion tC Release Series 7.0 is a sharp, sporty looking coupe at a great price-point. But offering a customizable product as a limited edition with a lack of any significant, exclusive features (the two big ones being options?) really makes no sense. And if I can see through it, the much shrewder, smarter Canadian target market Scion is befriending undoubtedly will as well. Or perhaps they already did…two years ago.

Porsche has just released the eighth generation of its venerable 911. We put the 443-horsepower 2020 Porsche Carrera S Cabriolet to the test - in winter.
Read more
Volvo

The Volvo V60 Cross Country does a great job of reminding us why station wagons were once so popular (and can do pretty much everything that an SUV can).
Read more
Coupe Reviews

For 2018, Jaguar has pushed the F-Type performance envelope into the stratosphere by unleashing the 575-hp F-Type SVR.
Read more
Hatchback & Wagon Reviews

With no performance bump, the 2018 Honda Fit Sport adds black wheels, a chrome tailpipe, a subtle body kit & a black/orange interior, all slapped with a 'sport' badge.
Read more
Mercedes-Benz