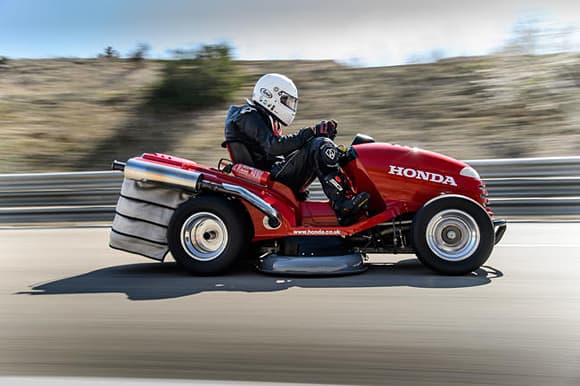 It cuts grass and hits insane speeds. What else do you need?

The Honda Mean Mower officially broke the Guinness World’s title for the ‘fastest lawnmower.’ Breaking the previous record by over 45km/h, the new record clocks in at average 187.60km/h or 116.57mph.

To meet Guinness World Records regulations the mower had to record the same run, in both directions, within an hour – with the average speed taken of these two runs. The result of this remarkable feat of engineering is a lawn mower set-up and geared to achieve a top speed in excess of 209km/h (130mph), weighing just 140kg, producing 96Nm of torque, an incredible PTW ratio of 532bhp/tonne; and an estimated 0-100 km/h acceleration time of just four seconds.

So why build a crazy mower, breaking world records? The motive behind this project was to showcase and demonstrate Honda’s spirit of innovation, it’s sports pedigree, and clearly show Honda does more than ‘just cars.’ Honda, you’ve made your point.