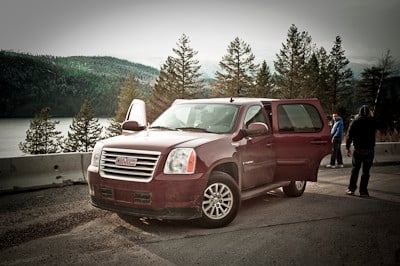 The 2009 GMC Yukon 2-mode Hybrid 4WD – We take the Yukon to Kokanee for another golf road trip.

Let’s face it, the full-size SUV gets a bad rep. Its popularity seemingly fading as David Suzuki and Al Gore keep preaching (good guys, by the way). Often carrying connotations of being these brawny, gas-guzzling, unsafe, monstrosities occupying our roads. Perhaps, some of this is true. And the advent of the more politically correct Crossover (CUV) hasn’t really helped either. That is…until now!! (thun thun thaaaan!)

Seriously, GM has recently introduced a few hybrid full-sized SUV models, including the 2009 GMC Yukon Hybrid, that not only defies what we’ve come to love (or hate) about these unappreciated gentle giants, but they’re redefining the segment altogether (in my humble opinion), introducing innovative technologies and award-winning features that consumers will value (and for the manufacturer’s sake, they better).

Last year, a group of us set on a golf trip to the Kokanee Springs Golf Resort in British Columbia: 25 guys, 72 holes of golf, 3 days, and 13 hours on the road via a not-so-fuel-friendly 2008 Chrysler Aspen SUV.
This year: more guys, more golf, a bit more debauchery, and new test vehicle to get us going: the 2009 GMC Yukon Hybrid.

The hybrid powertrain uses a Vortec 6.0L V8 gas engine with Active Fuel Management (allowing the V8 to run on 4 of 16 cylinders to save fuel) paired to a 4-speed automatic transmission (electronic variable). The ‘2-mode’ pertains to the V8 and the two electric motors that allow continuous variable operation at various speeds, particularly, high and low speeds. Unlike many hybrids on the market, this 2-mode system (co-developed by DaimlerChrysler, BMW, and GM) creates efficiencies for both highway and city driving.

The electric motors are both powered by a 300-volt battery which charges during braking and while cruising. The Hybrid Power Flow Display on the navigation screen is really cool, and does a great job indicating exactly where and when power is being distributed, as well as when the regenerative braking or cruising is charging the battery.

While $1.20/litre gas prices this time last year coupled with our 5.8L V8 Chrysler Aspen SUV for an 1100-km mountainous trek certainly didn’t do our wallets any favours, the more reasonable sub-$1/litre prices along with outstanding hybrid vehicle (full-sized SUV, that is) was a welcome change this time around.

EnerGuide rates the Yukon Hybrid at 10.5L/100km (27mi/gal) in the city, and 9.8L/100km (29mi/gal) on the highway. GM claims an estimated 50% savings in city fuel economy versus the non-hybrid version. Though, most of our driving was on the highway—the roads from Calgary, Alberta to our destination at the Kokanee Springs Golf Resort in B.C. consists of about 30% typical highway and maybe 70% ascending roadway (with a good 100km of pure uphill twisties). So, the throttle was engaged nearly the entire time; not much ‘charging’ going on (thank-you Display!). Even so, we burned through less than 3/4 of a tank on the 550km trek en route. Respectable for an engine this size…pushing 5600 pounds through The Rockies.

The 2009 GMC Yukon Hybrid feels great behind the wheel and handles very smooth on the highway.

Despite the abundance of technologies doing their thing (electric power toggling with the gas motor, valves cutting out and kicking in when needed, 2-mode transmission balancing, battery charging, etc.), these transitions were virtually unnoticeable. Power was available when needed and when passing other vehicles; suspension was superb in the corners.
The extremely quiet/silent motor is a bit eerie, almost unsettling at first, particularly behind the wheel of such a large sled, but the shock wears off. Actually, it’s a comforting silence; kind of cool when you’re traveling and chatting with friends in the back.

The only options are a sunroof and a rear-seat DVD entertainment system—the two things we could really have used on our trip, particularly with three guys sharing the middle bench.
Unfortunately, the third row 50/50 rear seats do not fold flat into the floor, evidently, chewing into our much needed cargo real estate. Unfortunately, we didn’t think about removing them before the trip. Fortunately, we didn’t remove them because apparently these seats weight a ton, and we’re not that strong, and we managed to fit everything in the end.

The exterior styling is gorgeous; a large frame with chiseled features and strong, clean lines from front to back.

Everything is well proportioned, from the large front grill to the taillight structure. The improvements in aerodynamics add to the cleaner styling as well: no fog lamps nor tow-hook openings, larger grill for better cooling, no roof rack rails eliminating drag, and tapered running boards for better air flow.

So is it worth forking out the extra funds for a Yukon Hybrid opposed to the gas-powered Yukon SLT? Or perhaps even a Crossover such as the Buick Enclave or GMC Acadia? Will the premium price investing in a hybrid offset fuel savings or perhaps offset your guilty plastic-bag using, water-wasting conscious?

Absolutely. GM is redefining the brawny SUV, in all the right (green) ways.