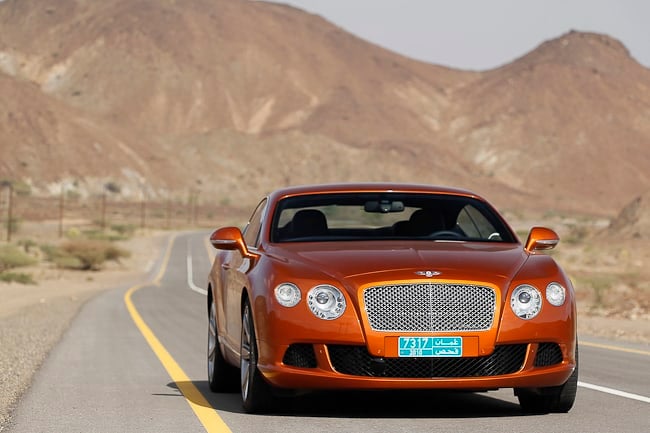 Grand touring in high style, we head to the heat of Oman to review Bentley’s 552-hp 2011 Continental GT

Muscat, Oman—A few months prior to Oman erupting in violence, the fine people at Bentley had the inspired idea to stage the first-ever car launch in this desert oasis. While some writers would shy away from traveling to a very foreign sultanate some 15 hours of flying time away from our politically charged yet peaceful land, I jumped at the chance.

The car being launched, after all, was the 2011 Bentley Continental GT, as enticing a grand touring coupe as you’re likely to find on North American soil—or Middle Eastern soil, for that matter. The last-generation Continental, which debuted in 2003, was no slouch in the performance department and the swoopy coupe was equally as adept at turning heads, but the new version…well, read on. The key to improvements in the performance of the new Continental GT come down to three factors: more engine, less weight, more refinement. While the 6.0-litre twin-turbo W12 engine of the original model was powerful (552 hp; 479 lb-ft), the new version is even more so (575 hp; 516 lb-ft). This is by no stretch a gargantuan difference, but when paired with the car’s 65-kg weight loss, it slashes the run from 0-100 km/h by two tenths (to 4.6 seconds) and boosts top speed by three markers (to 318 km/h). A quick blast through the deserted, desert roads of Oman proved the Bentley’s worth—no small thing when the base price rings in at CAN$208,900.

The revised 6-speed automatic transmission shifts gears in half the time, giving the Continental a distinctly racier feeling compared to the original. The top-speed claim could not be verified—at 210 km/h, a message on the instrument panel warned that the tires weren’t properly inflated for such rapidity. (It turns out that the Bentley technicians had prepared the coupe for comfortable touring, not edge-of-your-seat drag racing.) Traveling at this velocity was otherwise illuminating, though: It revealed that this Continental is superior to the last one in terms of steering, handling and driver engagement. The steering, for one, is more precise and direct. The calibration of the all-wheel drive system and the various driver aids is more finely tuned and more sporting—there’s no sense that these systems are ready to toss out the “electronic anchor” at the slightest sign of fun.

The adjustable suspension system is much improved as well; the comfort setting on the earlier version just felt wobbly, while the entire range of settings now feels more composed which, in turn, helps to make the Bentley feel more planted, even at elevated speeds. The Continental GT is a 2+2 coupe, meaning that the back seat is suitable only for small children. The new version has gained 4.6 centimetres of rear legroom due to the redesigned front seats. Even at that, a toddler strapped into a child seat will take up so much room, the driver or front-seat passenger will need to shuffle his seat right up to the dashboard. If you happen to be travelling two-up, though, the Bentley represents a very fine way to go. The seats are sporty and supportive. The gauges are legible, common-sense round dials, replacing the oddly shaped versions on the original. Wood, metal and double-stitched leather covers every possible surface—and the level of craftsmanship is absolutely peerless. One significant complaint, though: In the weight-savings campaign, the front seats were also made lighter, in part by moving the seat-belt mechanism to the car’s B-pillar. This move has meant that, depending on your height and the seat position, you may find the shoulder belt slipping below your shoulder, not exactly the most comforting scenario.

As an everyday driver, the Continental GT is also more than a little intimidating: It’s big, it’s fast and it’s expensive. Once you get used to the car’s performance and its dimensions—figuring out where the corners are is not easy—things begin to fall into place easily. The Bentley is, of course, an all-wheel drive car, so it’s ready for inclement weather. And it’s an automatic, so you can leave the paddle shifters alone and let the car do all the work—simple. From a design standpoint, the new Continental GT is more striking than ever. The iconic shape is essentially the same, as are most of the key dimensions. But the distance between the front wheels has increased, the front grille is lower, the hood is lower and the back features more sharp angles. These changes, combined with the standard 20-inch wheels, have given the Bentley a more aggressive attitude overall.

All things considered, then, the 2011 Bentley Continental GT is a more mature, higher-performing and more engaging version of its predecessor—and a poster child for the incremental improvement movement. Mark Hackinghttp://www.markhacking.com/
Mark Hacking is an award-winning car, motorcycle and motorsports journalist whose work has appeared in Azure, enRoute, Intersection, NUVO and Toro, among many others. He is the former editor of Performance Racing News, the former managing editor of DRIVEN, and a member of both the Automobile Journalists Association of Canada and the Motor Press Guild of California. An avid racer, Mark is a three-time podium finisher at Targa Newfoundland and, this past season, raced in the VLN Series at the Nürburgring with the factory Aston Martin team. His motto in life: Drive fast, take chances.
FILED UNDER:
BentleyCar ReviewsBentley ReviewsNew Cars

Here's a closer look & full review of the new 2018 Stelvio Ti - the mid-range offering of the mid-size sport SUV. But is 280 horsepower enough to compete?
Read more
Bentley

We review the 2017 BMW 540i and conclude this mid-range model is closer to luxury cruiser than a true sport sedan. But we're not complaining.
Read more
2017 SUV and Crossover Reviews

Unlike some competitors, the 2017 Mercedes-Benz GLC 300 Coupe is indeed a sporty mid-size SUV with fastback looks and performance to match.
Read more
Car Reviews

The 2017 Toyota Tundra CrewMax SR5 with TRD Pro Package is a hefty pickup with a price tag to match. Does it compare to the domestic trucks?
Read more
2017 SUV and Crossover Reviews

When is a Volkswagen really a Porsche? Technically never, but you can get close in a vehicle like the 2017 Volkswagen Touareg we suspect has irked Porsche dealers for a long time.
Read more
Audi

Built for the Desert. Works in the Snow. The 2017 Ford F-150 Raptor is the all-terrain, overachieving pickup. We have some fun with the Raptor in rural Quebec.
Read more