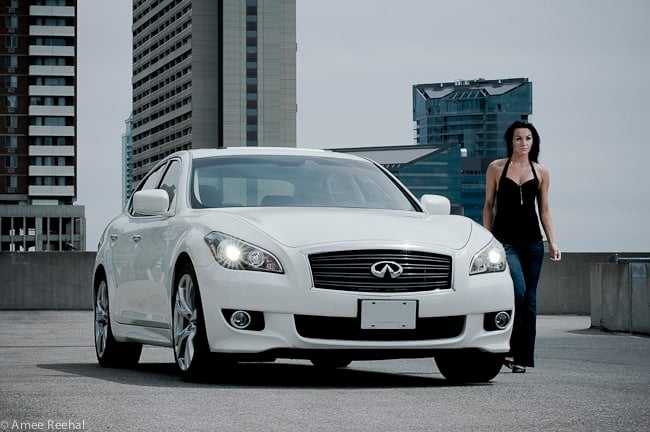 Infiniti has introduced the all-new M-series for 2011—a stable of six luxury sport sedans that include the M37 and M56 models. From the entry-level Infiniti M37 with its 3.7-litre V6 starting at $52,400 MSRP CDN, to the cream-of-the-crop Infiniti M56 Sport, a 5.6-litre 32-valve V8 starting at $73,400, the company has covered the gamut of uncompromised performance, luxury, and style for the 4-door fanatics such as myself, offering a wide-range of products at all high-end price-points. Fortunately, I had the opportunity to test the latter: the 2011 Infiniti M56 Sport—a well-crafted saloon that will certainly give its German counterparts a run for their money.

Also check out: First ever 2016 Infiniti Q30 Premiering at Frankfurt The M56 Sport’s exterior styling with long, flowing lines exudes elegance and a sense of motion, while the more beefy styling cues including the curvy fenders, shouldlines, and front grill, makes it clear this sedan offers more than just class, it means business—the huge 20-inch 5-spoke wheels wrapped in 245/40R20 w-rated performance tires clearly validates this aggressive persona. Features include aluminum doors, hood and trunk; sporty dual exhaust with chrome finishers; power folding/heated outside mirrors with reverse tilt down feature; rain-sensing, variable intermittent front windshield wipers; and auto-on/off HID Xenon headlights with the Adaptive Front lighting System (AFS). Overall, Infiniti has managed to sculpt a sedan that is both elegant yet aggressive—not an easy task, but the M56 Sport certainly pulls it off.

The cabin is stunning and well sculpted, with soft touch leather and touches of silver-powdered wood accents throughout, inspired by a unique heritage of Japanese lacquering techniques. The exterior design cues flow into the cabin, creating a comfortable, well-tailored atmosphere where everything is intuitive and just makes sense. The unique waterfall-inspired centre console is not only designed well, void of invasive buttons and dials, its easy to navigate, employing perhaps the best interface I’ve used in a long time—toggling between menus via the primary dial front and centre is made simple and smart, especially convenient when linked to an iPod. Standard features only with the M56 Sport (within the M56 lineup) includes a Bose Studio Surround sound system with a digital 5.1-channel setup, including small speakers on the seats next to the headrests; sport-trimmed, paddle shifter equipped steering wheel and shift knob; sport-bolstered and trimmed front seats; power tilt and telescopic steering column; and a unique climate control system called Forest Air with auto circulation, breeze mode, Plasmacluster air purifier, and Grape Polyphenol filter…no idea what these really mean but they’re all features feel great. The Infiniti hard drive navigation system with 8-inch touch-screen is standard on all M56 trims. Super-responsive, scrolling through the gears, the M56 Sport handles brilliantly (very ‘butter-ery,’ as I explained to my wife; she didn’t get it). Infiniti claims the all-new M is even more responsive than before because of its next-generation Zero-lift Front Midship Platform, providing more balance to this RWD. Taking the M56 into sharp corners is fun and effortless, and acceleration is graceful so don’t expect to get thrust into your seat; power is consistent throughout the rpm range. Stopping power is impressive too: aluminum 4-piston opposed calipers with 14-inch vented discs up front, and 2-piston opposed 13.8-inch vented discs in the rear. The new Infiniti Drive feature includes a variety of driving modes that include Standard, Snow, Sport, and Eco.

Some safety features found standard on the M56 Sport include the Blind Spot Intervention System and Lane Departure Warning (LDW) and Lane Departure Prevention (LDP)—both very valuable features that essentially warn the driver when a vehicle is present in the blind spot, and when the M56 veers outside its lane, respectively. Also standard, Active Tracing Control; and Distance Control Assist (DCA): ensuring an appropriate distance between the M56 and the vehicle ahead.