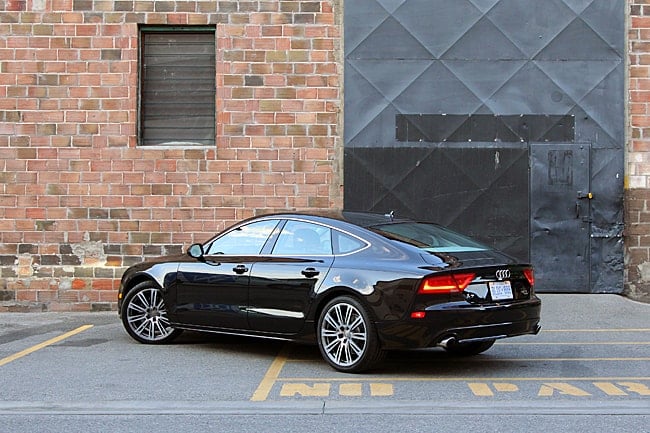 A hatchback has never looked so good. We review the 2012 Audi A7 Sportback

When Audi unveiled its stunning Sportback concept car at the 2009 North American International Auto Show in Detroit, the luxurious, five-door, fastback model marked a significant styling departure for the popular German marque.  Well the production model of this car has now been released.  The A7 is an all-new model for Audi and stands out from its siblings due to the fact that it is a proper 4-door sedan masquerading as a sleek sports coupe. The Audi A7 is a stunning looking automobile. During my week long test period I became smitten with this Germanic temptress, as did almost every other person she came into contact with. This is one of those landmark designs that is so well executed that even people with little interest in automobiles tend to be drawn to the car. A quick survey of her growing legions of fans revealed that the A7’s initial appeal is the car’s feminine rear end, but the overall consensus was that the entire car possessed more curb appeal than just about any car on the road today.

The car’s profile is long and sleek, and the car sits low on big, 20-inch, multi-spoke alloys. The roofline sweeps dramatically rearward from the B-pillar and flows gracefully over the cars wide flanks and sculpted tailgate. A distinct contour circles the car’s waistline and subtle fender flares convey a sense of stability to the car, as it becomes apparent that the bulk of the car’s weight is carried low to the ground. When travelling at highway speeds a rear spoiler discretely emerges to enhance aerodynamics while adding a sporty flair. I was lucky enough to get a chance to take the A7 on a weekend journey to the city of Kelowna in the Okanagan Valley. The ride was refined enough to match the luxurious trappings that populate the passenger cabin, but nimble enough to be thoroughly entertaining when the road became twisty.  The A7 shares much of its architecture with Audi’s executive flagship, the A8, so it should come as no surprise that the A7 is a relatively large car. In fact, the A7 slots between the big bruiser and the ever-popular A6 with regards to its overall size. This makes it a great touring vehicle with lots of room for both passengers and cargo.

As I wound my way through the network of tunnels on the less-than-perfect road surface that carves through the famous Fraser River Canyon I marvelled at how the A7 came alive and seemed to respond instantaneously to my inputs. The car followed my selected line with aplomb, and remained planted to the tarmac despite my occasional attempts to upset the balance and induce a slight wiggle.  Having the latest iteration of Audi’s venerable quattro all-wheel-drive system gives the A7 the surefootedness many buyers are looking for in a modern automobile, and will insure that with proper tires, I could expect to drive these same mountain roads at any time of the year.  Add to this some voodoo engineering in the form of Audi’s Drive Select system which allows the driver to tailor the car’s engine mapping, throttle response, shift-points and steering feel to best suit the driving conditions. There is only one engine option for the A7, but it is a sweet one. Under the aerodynamically sculpted hood you will find Audi’s supercharged, 3.0-litre TFSI V6 engine which is sourced from the S4. This power plant is a marvel of engineering and efficiency, so you get the best of both worlds. The engine generates 310 horsepower and 325 lb-ft of torque to all four wheels via Audi’s venerable Quattro system. That might not sound like a lot in a world that seems to offer an abundance of 500-horsepower automobiles, but it does provide enough scoot to shuttle the car from 0-100 km/h in a mere 5.4 seconds.

The eight-speed, Tiptronic transmission is one smooth operator, and although the top two gears are slated for highway cruising and maximizing fuel efficiency, the lower six seem prepared to engage in spritely take-offs and back road high-jinks.  The combination of direct injection and an ultra-efficient supercharger ensure that the driver will always have more than sufficient power on hand to either get out of trouble, or perhaps create a little of his own. The passenger compartment is simple, but sophisticated. It is hard to beat an Audi in this department. Everything is placed to permit intuitive use by the driver, and fit and finish is second to none. All but the tallest individual will find the car comfortable, and the car’s utility has been maximised by the addition of a large rear hatch, complete with 60/40 split folding rear seats. The A7 will have no trouble transporting golf clubs, baby buggies, and hockey bags in this commodious space.  I even managed to transport a very large aquarium and solid wood stand in the car with the hatch closed. That was an impressive feat! The Audi A7 only offers seating for four, but this makes for a more comfortable passenger experience.  My car featured a distinctive Nougat Brown leather interior that reminded me of a new baseball glove. Not surprisingly, the seats felt almost as stiff as said glove, but as this was a brand new vehicle I am sure like a glove, they would soften with time.  During my weekend journey to B.C.’s wine country the seats proved supportive during hard cornering, but comfortable enough for long range comfort.

My test vehicle featured an Ash wood trim with a matte finish throughout the cabin. This unique wood treatment was the first thing to draw comments when passersby peeked in for a look as it made the trim look more opulent as its mixture of textures and knotholes added some flair to the interior.

The Audi A7 comes equipped with the company’s well-sorted multi-media interface (MMI). Operation of this multi-purpose control system is much more intuitive than similar systems in the marketplace, and now features a slick, console-mounted touch-pad which helps simplify some of the more common functions. The system’s display screen emerges from atop the dash and offers users excellent visual cues for many of the car’s comfort and entertainment features.

My test unit featured a host of electronic goodies that included the likes of an advanced navigation system, a premium Bose audio system, and a four-zone climate control system. Safety technologies included Audi’s blind spot monitoring system, adaptive cruise control, and a heads-up display. Audi’s signature LED headlights are distinctive and stylish, but they also provide exceptional coverage and adaptive capabilities when cornering. Other systems include active lane to alert the driver when he or she is wandering outside the lane of travel, and night vision assistance with thermal imaging, which has been engineered to detect pedestrians, obstacles or animals that may be hidden from view of the car’s headlights.

The Audi A7 is a sophisticated new player in a crowded marketplace. However, one thing that definitely sets the A7 apart from most of its main rivals is aggressive pricing. With the price of admission set at a reasonable $68,600, Audi dealerships will probably have a difficult time keeping them in stock. One thing is for certain, a hatchback has never looked so good. Russell Purcellhttps://www.flickr.com/people/autoexposurecanada/
Russell Purcell is an award-winning automotive journalist and photographer based in Vancouver, B.C. His passion for automobiles was sparked at the tender age of six, when a family friend gave the wide-eyed first grader a ride to school in a track prepared Porsche 911 RSR. He continues to fan the flames by building an impressive library of automotive related books as well as a vast collection of interesting automobilia and motoring artefacts. Russell is a member of the Automobile Journalists Association of Canada, and is active on Twitter as RoadTestRuss.
FILED UNDER:
AudiAudi A SeriesCar ReviewsAudi ReviewsNew CarsSedan Reviews

Kia ramps up its stylish compact 4-door with a new sporty GT model putting down 201-hp from a new 1.6L turbo engine. Not quite a Stinger, but getting close.
Read more
Audi A Series

We review Lexus' best-selling sedan. The 2019 ES 350 is priced well compared to German rivals, has more curb appeal than ever, but AWD would be nice.
Read more