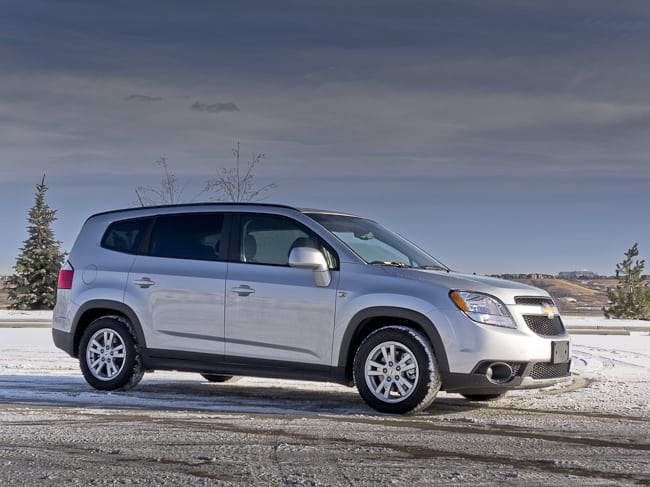 A Compact 7-Seater — Power to the People! We review the 2012 Chevrolet Orlando

You would be hard-pressed categorizing the all-new 2012 Chevy Orlando — not quite a minivan; certainly not a wagon; a compact crossover? Perhaps. Perhaps not. Frankly, with a standard third-row for seven passengers coupled with added safety, some ingenious interior features, a stylish exterior design, and a reasonable $19,995 MSRP CDN starting price-point, does it really matter?
Also see: 2017 Chrysler Pacifica Hybrid Review
Well, if you’re a young, growing family or a clan who simply cannot afford those luxury minivans with all the bells and whistles yet need to haul the folks around, my guess is: probably not. And while you could argue that a family can get into a Dodge Caravan for the exact same starting price, it’s the Chevy Orlando’s smaller frame, fresher styling, and not-so-minivan attributes than will likely resonate with families. A compact 7-seater like the 2012 Chevrolet Orlando is long overdue. And, all you Canadians, count your blessing because the Orlando is a Canada-only offering. Main competitors for the Chevrolet Orlando include the Mazda5, Kia Rondo, and Dodge Journey, and while they all have their pros and cons or excel in their own little way, the Orlando does offer some notable standard features either unavailable or ‘not free’ with the rivals listed above, including: OnStar with Turn-by-Turn Navigation and RemoteLink mobile app (sure, it’s a GM thing, but still); a child-view mirror (keep an eye on the kiddies with a mirror that sits above the rear-view mirror); power rear child door locking (great little feature unavailable in the rivals above); trip computer; SiriusXM Satellite Radio; deep tint windows; front and rear express down mirrors; and cargo roof side rails. All standard.

Inside, the Chevrolet Orlando finds clever little features and functions many families will certainly value. It’s this sort of ingenuity sure to set the Orlando apart, and on the larger scale, help set GM apart from the others, where manufacturers like Ford lead the charge in innovation, stepping it up with every new model hitting the market. Considering the Orlando is actually a European product now hitting Canadian soil (the US jumped ship on the Orlando), and the progressive Europeans are usually, like, light-years ahead in both form and function, incorporating some Euro-flavour into the Chevrolet mix can only be a good (much-needed) thing. And it shows. While these features, including the child view mirror and power rear child security door locks (basically, you can lock your kids in the back via isolated power lock button for the rear doors only), it’s the front control cluster that steals the show; the entire control panel fascia flips up to reveal additional, hidden storage. Depending on the trim level, also includes an auxiliary input and USB input, so your iPod is both plugged in AND hidden. Again, not earth-shattering features but enough to add-value, set itself apart, and above all, features that are actually useful and utilized by the consumers who undoubtably deserve (and demand) more. Power to the people.

Overall, the cabin feels spacious, and despite the array of mixed plastics, the Chevrolet Orlando sees a well-designed cockpit. Other family-friendly niceties found in the Orlando include map and bottle holders on all four doors and various individual storage compartments in the cargo area. Rear occupants have decent space, while 3rd-row passengers’ headroom is respectable thanks to the Orlando’s stretched-out, raised roof line towards the rear (when compared to the Mazda5, Rondo, and Journey, the Orlando trumps all three with the most passenger volume, by a significant margin).

Amee Reehalhttp://www.ameereehal.com/
Shooting cars professionally since film was a thing, Amee's work has appeared in various outlets including NBC Sports, Chicago Tribune, SuperStreet, GlobeDrive, MotorTrend, and others. He's the managing editor & founder of TractionLife.com. Find him travelling, spending time with his kids and family. Or golfing, poorly.
FILED UNDER:
Minivans