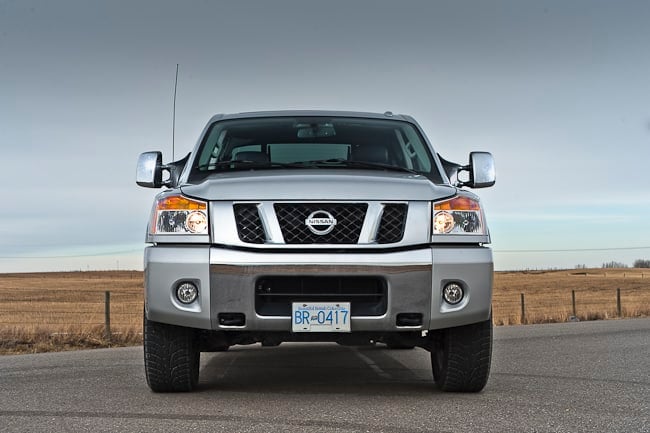 The Nissan Titan has always come across as a beast of a pick-up truck. Its V8 engine and throaty exhaust produce a raucous rumble that makes heads turn and people take notice. Its bold design is distinctive enough to stand out from the crowd, and there is enough power under the hood to meet the needs of the average consumer. Unfortunately, it hasn’t evolved much since it was introduced to the Canadian marketplace in 2004. As a result, it is a bit of a dinosaur when compared to rivals from Toyota, Ford, GM and RAM. Having said that, it does bode well for the buyer who is simply looking for a powerful rig to perform occasional light towing duties, haul small loads, or engage in outdoor adventures, as many dealers are offering deep discounts on Titans.

There is nothing significantly wrong with the truck, but it is hampered by the fact that it can only be ordered with a relatively inefficient, gasoline-fed, 5.6-litre V8 engine and a 5-speed transmission. This power plant generates 317-horsepower and 385 lb.-ft. of torque, but without the benefit of either a 6-speed transmission or cylinder deactivation capabilities it gulps down an awful lot of fuel. While these numbers were impressive when the Titan first hit the market, they are considered pretty anemic in 2012.

The big “Endurance” 5.6-litre engine is mated to a 5-speed automatic transmission that proved to be a very smooth operator, and this combination delivers impressive acceleration for such a big truck. The rumble of the exhaust is addictive, especially when you accelerate hard, but again, this will increase your pain at the pump. Handling is impressive for such a large truck, and steering and pedal feel remained communicative at all times. The truck’s suspension and brakes inspired confidence whenever I was behind the wheel. Not a work truck

My test rig was a well-equipped, Crew Cab, 4X4 model outfitted more for passenger comfort than work duty. Don’t get me wrong, as the Nissan Titan is capable of towing up to 4,128 kilograms (9,100lb.) in this configuration, but true work trucks tend to be 3/4 or 1-tonne models powered by diesel engines. If you plan to use this truck to pull a small camper, toy trailer or boat, it will perform this function with ease.

The Nissan Titan is still a beast. Its bold front end looks like a chisel, and with its wide, three-piece grille, enormous headlights, and bulging hood it looks more aggressive than its rivals. A wide stance and prominent fender flares exaggerate its dimensions to make it appear even larger than it really is. My tester’s big 20-inch wheels gave the truck the aggressive, go anywhere look

favoured by younger buyers, and most of the comments it elicited during my seven day test period seemed to be from young men in their early twenties.

While the Titan’s interior looks a bit dated and chunky, I have to admit it wins big points in the comfort department. This truck is spacious. I found the front passenger compartment to be much more roomy than that in the Toyota Tundra test truck I had the week prior. The rear seating area was much bigger as well, but this would not be a fair comparison to make as my Toyota test vehicle was a Double Cab unit, not a Quad Cab. There is plenty of useful storage space scattered throughout the passenger compartment including a huge, wide storage bin in the center console that is large enough for most laptops and tablets. Another neat feature is the power operated rear window. At the touch of a button it retracts into the back wall.

If I had one major complaint about the passenger compartment it would be the poor placement of the window and mirror controls. They sit atop the door panel where they are exposed to the elements whenever the door is opened or you lower the window. The side windows on the Titan sit almost vertical and suffer from the lack of a rain gutter system, so on rainy days the water flows directly onto the controls which can’t be a good thing in the long run.

The Titan is available with your choice of either the venerable King Cab design – which employs two small, rear-hinged doors that open 168 degrees, or a Crew Cab offering that comes fitted with four proper, full-sized doors. The Titan King Cab and Crew Cab models can be ordered in your choice of four trim levels- S; SV in short- or long-wheelbase; the off-road ready PRO-4X; and SL trim. However, only the King Cab S and SV can be had in two-wheel-drive form.

The Crew Cab model comes equipped with a 7.3-foot cargo box (the longest in the class) which in the case of my tester, was fitted with a bed-liner and a very clever Utili-track cargo carrying system. Other cool features include a soft-drop tailgate, and a lockable storage compartment just aft of the rear wheel on the driver’s side.

The Nissan Titan has proven to be a reliable and rugged truck best suited for the recreational buyer, but its design and power train are well past their prime. As a result, it would be tough to recommend the purchase of a new Titan unless you find an exceptional deal. Russell Purcellhttps://www.flickr.com/people/autoexposurecanada/
Russell Purcell is an award-winning automotive journalist and photographer based in Vancouver, B.C. His passion for automobiles was sparked at the tender age of six, when a family friend gave the wide-eyed first grader a ride to school in a track prepared Porsche 911 RSR. He continues to fan the flames by building an impressive library of automotive related books as well as a vast collection of interesting automobilia and motoring artefacts. Russell is a member of the Automobile Journalists Association of Canada, and is active on Twitter as RoadTestRuss.
FILED UNDER:
New CarsCar ReviewsNissanNissan ReviewsTruck Reviews

Life in the city with the all-black monster that is the 2020 Chevy Silverado Trail Boss with the Midnight Edition package. Our full review.
Read more
Overland

The new Nissan Z car is finally here, but does the Z Proto successfully pay homage to the past? Or butcher the Z's iconic heritage?
Read more
Truck Reviews

Shopping for a compact pickup truck? We highlight all the top mid-size trucks on the market today, including Colorado, Gladiator, Tacoma, Ranger and more.
Read more
Nissan

The next-generation 2021 Ford F-150 may not look much different than its predecessor, but offers precisely what pickup truck buyers now need.
Read more
Nissan

Here's a fresh batch of 2021 & 2022 sport utilities worth waiting for. Over 15 models & redesigns only, from small CUVs & full-size SUVs to all-electric.
Read more
Kia