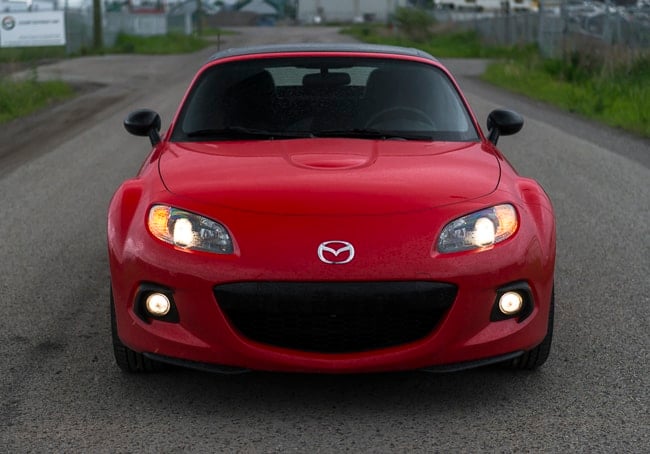 For over 20 years, the Mazda Miata (in it’s classic True Red paint scheme, of course) has appealed to a mass of middle-aged men and divorced Cougars prowling in what is now a timeless little car that happens to be the best-selling compact on planet Earth. This tells us one of three things:

Unfair stigmas aside, this 2013 Mazda Miata GS (yes, named MX-5 at birth, but Miata, the moniker we’re familiar with, is so much sexier and sounds less robotic) starts at under $30,000 and keeps up with the best of them (glossy European 2-seaters). Now, with a subtle yet much needed 2013 refresh, the new Miata GS may finally start to shatter that bald-man-going-through-mid-life-crisis-but-golfs-4-life discriminatory mindset. Nearly all the changes are cosmetic, but the greatest is the 2013 Mazda Miata GS front grill redesign. Granted, Mazda cannot mess with the MX-5’s indistinguishably cute, curvy little design a whole lot, and rightfully so, however the newer bumper design incorporates fresh, more linear front fog lights. And with the all the darker touches, like black hardtop (PRHT) and black outer door mirrors, coupled with the stealthier 17-inch rims (205/45R17), the entire 2013 Mazda Miata package is getting bolder and perhaps more sophisticated. Another change for 2013: passenger airbag sensors now replace the outgoing manual airbag switch. This probably adds a bit more weight, but no matter. Driving Dynamics alone set this 2-seater apart. Now, instead of envisioning the Miata outside the tanning salon, close your eyes and imagine wearing a helmet, 6-point Takata harness, and sure, a racing suit, ripping around a track. Because this is where the fun, sporty Miata shines. And while most Miata owners likely don’t hit the track (nor did I, for that matter), they’re enjoying the tight suspension and responsive handling through the windy, mountainous roads on the weekend. A track-worthy car in a cute guise, if you will. The 2.0L DOHC 16-valve inline-4 VVT engine provides ample power (167-hp @ 7,000 RPM) and some decent high-end torque (140-hp @ 5,000 RPM); mated to the 6-speed manual and the front engine/RWD setup, the 2013 Miata GS is ready to go. While most worthy, high-caliber roadsters on the market today, with the likes of a Z4 or Boxster or SLK, you’re looking around $45,000-plus. But that’s correct. The 2013 MX-5 GS starts much less at $29,250 CDN MSRP; and while the driving dynamics and standard sport suspension with Bilstein shocks are rock-solid, there’s perhaps that looping stigma some of us shamefully posses. But now for 2013, with it’s low, sleeker styling and better, beefier curves, the Miata successfully manages to retain that smiley, front grill image while incorporating some new design lines with shall we say more aggressive, beefier details like flared-out fenders. Mind you, my Miata GS tester here is priced at $36,045.

Yes, significantly more than sub-$30k entry-level pricing (and there’s also a higher 2013 Miata GT trim starting at $40,250 CDN MSRP). Those potential 2013 Mazda Miata owners with plans to simply stroll down Rodeo Drive or pull-up to the driving range red as a lobster, will undoubtably purchase the Miata GS convertible hardtop. But driving-purists, who plan to throw the 2013 Mazda Miata GS into corners, can simply opt for the good old hardtop and save the money for track-time (while shedding 75-lbs of unnecessary PRHT weight).