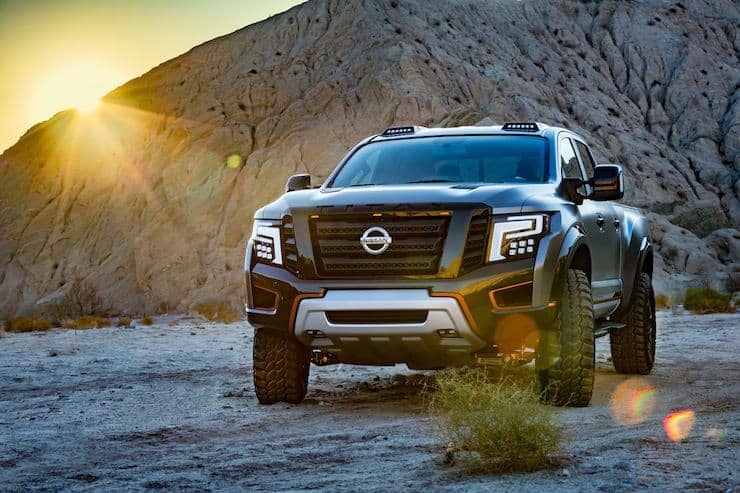 We hit the 2016 Detroit Auto Show media floor to scope out the best in concepts – from the aggressive Nissan Titan Warrior pickup to the sporty Acura Precision coupe, here’s our 5 favourites in future vehicles

Detroit, a city struggling to pull itself up out of an economic rut, is driven by the auto industry, and there’s no better proof of that than the North American International Auto Show (NAIAS) it plays host to every January. This year’s event, which runs January 16-24, shows an auto industry—and a city—that continues to recover after the recession of 2008-2009. In honour of an industry looking forward to better days, here are our top five concept vehicles from this year’s NAIAS. Nissan has big plans for its truck lineup, which begin with the all-new Titan pickup that went on sale at the end of 2015. But if you want an idea of Nissan’s next steps, here’s a good one: the Warrior concept builds on the Titan XD and shares its diesel engine, but incorporates styling touches and off-road capability that serves as a warning shot across the bow of Ford’s SVT Raptor. The Buick Avista is the most convincing example yet of this company’s effort to attract a younger demographic to its showrooms. This is a rear-drive coupe powered by a 400-hp twin-turbo V6 its maker says “embodies the dynamic soul of Buick.” Bearing styling elements seen previously on the Avenir concept, and more recently on the 2017 LaCrosse sedan, this is a sharp-looking car that, if carried through to production, will do much to change people’s opinions of the Buick brand. Like most concepts, the Precision predicts Acura’s future design direction, and based on what we saw at the company’s stand in Detroit, we like where Honda’s upscale brand is going. This long-and-low sedan (it’s much longer and wider than the current RLX flagship) is based around a new “Diamond Pentagon” grille and LED headlights “composed of organically arranged fractal elements.” Cool tech includes an infotainment system that ‘scans’ the car’s occupants and calls up personalized features and functions. You know Kia’s aiming high when it comes up with a three-row crossover concept that looks like a mashup of Volvo’s XC90 and the Bentley Bentayga. No matter your opinion of that mix, this concept speaks loud and clear to Kia’s desire to establish itself as a serious build of upscale cars. Inside, there are vital sign detectors in the seats, and an LED panel in the headliner conceived to relieve jet lag and invigorate those riding along. Sharing its architecture with the forthcoming Audi Q6 crossover, the h-tron concept explores the idea of a crossover fueled with hydrogen, and driven by electricity. Audi claims a driving range of 600 km thanks to three hydrogen storage tanks, and a pair of electric motors with enough juice to run the h-tron from zero to 100 km/h in less than seven seconds.

Chris Chasehttps://chrischasescars.com/
Chris has been writing professionally about cars since 2004, in print and online. He lives in Ottawa with his wife and two feline tyrants. In rare quiet moments, he can be found travelling or playing one of his way-too-many guitars. Chris is also a journalist member of the Automobile Journalists Association of Canada (AJAC).
FILED UNDER:
AcuraAudiAuto NewsAuto Show CoverageBuickKiaNissan

The new Nissan Z car is finally here, but does the Z Proto successfully pay homage to the past? Or butcher the Z's iconic heritage?
Read more
Acura

If you're in the market for a Kia SUV or crossover, here are all 5 models you need to know about. Including Soul, Seltos, Sportage, Sorento & Telluride.
Read more
Acura

The small crossover field is getting tight and the new 2021 Kia Seltos will only make the competition sweat when it hits Canadian dealers mid-March.
Read more
Auto Show Coverage

In case you missed it, here are 7 major debuts from the LA Auto Show. From the Mustang Mach-E to redesigned Nissan Sentra, these cars go on sale in 2020.
Read more
Nissan