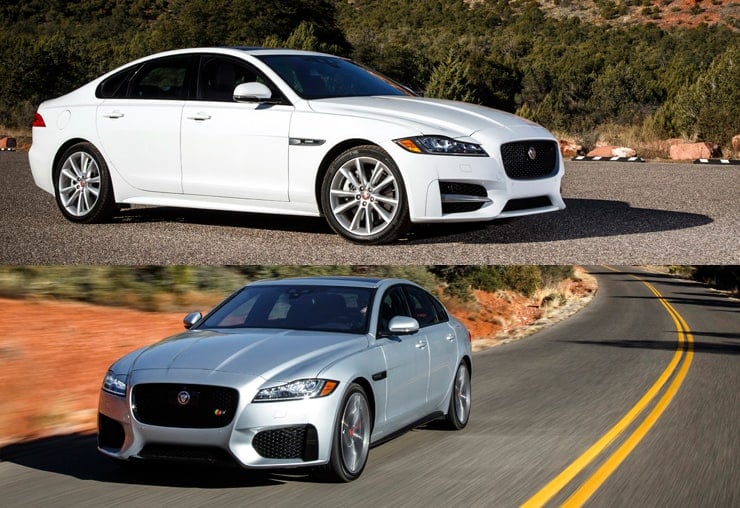 Sedona, AZ – The fine folks at Jaguar have redesigned their popular XF mid-size luxury-sport sedan offering for model year 2016, and after spending some time behind the wheel, I am happy to report that the car is vastly improved in all departments.

Redesigned for 2016: Sleek and Refined

The car will look familiar as it retains much of the design language that made the previous iteration of this car so appealing to the eye, but the new car looks fresh, sleek and more refined. This is important, as the XF has been the bread-and-butter offering for the iconic British carmaker since the model was first introduced in 2007 and has won more awards than any other Jaguar product. Keen observers will note the presence of new lighting front and rear, including LED headlamps and tail lamps similar in shape and design to those on this car’s sexy cousin, the glorious F-Type.

The external dimensions of the car are similar to those of the outgoing model, but the wheelbase has been stretched slightly to provide more legroom in the rear cabin. I stand 6’2″ tall and found there to be plenty of real estate available for my limbs in all seating positions, and headroom is also in abundance as long as you don’t play in the NBA.

A full 75-percent of the body structure of the new XF is constructed of aluminum, a move that Jaguar kicked off with the recent redesign of its venerable XJ full-size sedan. Using this advanced aluminum architecture has resulted in an overall weight reduction of 11-percent and an improved structural stiffness by 28-percent. As a result the car feels more nimble in the handling department, a fact that is further enhanced by the stiffer body. The lighter weight also helps the car achieve better fuel economy. The big news is under the hood, and for some, it will be regarded as sad news. This is because the glorious 5.0-liter supercharged V-8 engine that used to reside there has been ditched in favour of a proven 3.0-liter supercharged V-6 engine- of which there will be two variants. The first produces a healthy 340 horsepower and 332 lb-ft of torque, while the unit fitted to the XF S model will bump the horsepower to 380. Both engines are mated to a ZF eight-speed automatic transmission which retains the company’s novel rotary control dial, but can also be operated using paddle controls. Future plans call for a 2.0-litre turbo-diesel inline four-cylinder engine to be added to the menu in the near future, but as there still might be some reluctance by Canadian consumers to embrace the technology due to the fallout caused by the Volkswagen diesel debacle, sales might not be overly strong initially. Driving enthusiasts may complain that Jaguar will not offer the car in rear-wheel drive form in our market, but the reality is that the majority of Canadian customers would welcome the four-season surefootedness that comes with Jaguar’s well-sorted Instinctive All-Wheel Drive system.

There are four trim levels available- Premium, Prestige, R-Sport, and the potent S. With each step up the ladder the car’s equipment level gains a variety of safety, comfort, and styling additions, while the top-tier S model also gets the mild horsepower boost.

After two days of driving both the R-Sport and S models in a variety of environments I came to the conclusion that the new Jaguar XF is more refined than the outgoing car, and although it no longer has the big grunt of a blown V-8 engine, it still delivered a top-notch driving experience. Acceleration is strong and linear, and the longer wheelbase and competent suspension smoothed out the ride over rough mountain roads while still allowing the car to carve its way through the twisty bits like a much smaller sports machine. Much of this dynamic handling ability can be attributed to clever engineering wizardry. All XF models can be ordered with Jaguar’s Adaptive Dynamics (standard on S, and available as a no-cost option on the other trims), a trick system which modifies the vehicle’s response to driver inputs like throttle position, braking, and steering, but also electronically controls the suspension settings to best suit road conditions and body movement.

After two days of driving both the R-Sport and S models in a variety of environments I came to the conclusion that the new Jaguar XF is more refined than the outgoing car, and although it no longer has the big grunt of a blown V-8 engine, it still delivered a top-notch driving experience.

Another innovation, standard on all models, is Jaguar’s All Surface Progress Control (ASPC). ASPC is basically a low speed cruise control system which helps the car maintain traction when travelling over slippery surfaces or when faced with inclement weather conditions.

Both the R-Sport and top-spec XF S demonstrated that they handle with a new level of precision, although I did notice just a hint of understeer when cornering aggressively at speed. The lightly assisted power steering was responsive to subtle corrections and response was immediate, leaving the driver with renewed confidence. The well insulated cabin keeps road, engine and wind noise from intruding on passenger comfort which is further enhanced by an extensive new list of luxury appointments and electronic accessories.

All the luxury and comfort equipment one expects in a premium automobile is present and accounted for including a whole host of new technology like Jaguar’s InControl touch-screen infotainment system, advanced LED lighting, premium Meridian audio, an available heads up display, and a host of new safety integrated driving assistance features.

The XF shares much of its architecture with the upcoming XE compact sport-sedan and F-Pace SUV. Together, this potent combination of cars is expected to reinvigorate the brand and help it triple its market reach in North America by 2017. If the XE and F-Pace prove to be as well engineered and packaged as the new XF, then rival brands like BMW, Audi and Lexus better be prepared to look in their mirrors. Russell Purcellhttps://www.flickr.com/people/autoexposurecanada/
Russell Purcell is an award-winning automotive journalist and photographer based in Vancouver, B.C. His passion for automobiles was sparked at the tender age of six, when a family friend gave the wide-eyed first grader a ride to school in a track prepared Porsche 911 RSR. He continues to fan the flames by building an impressive library of automotive related books as well as a vast collection of interesting automobilia and motoring artefacts. Russell is a member of the Automobile Journalists Association of Canada, and is active on Twitter as RoadTestRuss.
FILED UNDER:
New CarsCar ReviewsJaguarJaguar ReviewsSedan Reviews

Kia ramps up its stylish compact 4-door with a new sporty GT model putting down 201-hp from a new 1.6L turbo engine. Not quite a Stinger, but getting close.
Read more
Jaguar

We review Jaguar's mid-size XF sedan with the 3.0L supercharged V6. The 2019 XF-S enters its 2nd-generation with minor tweaks since arriving in 2016.
Read more
Ford

What's the difference between the Fusion Hybrid and Energi? Is the 2019 Fusion Energi worth it? We review Ford's sleek plug-in hybrid (PHEV) sedan.
Read more
Jaguar

Finally, the 2019 Nissan Altima sedan gets the love it deserves with AWD and the most extensive platform changes in 20 years. New interior, redesign, more tech, and performance.
Read more
Jaguar