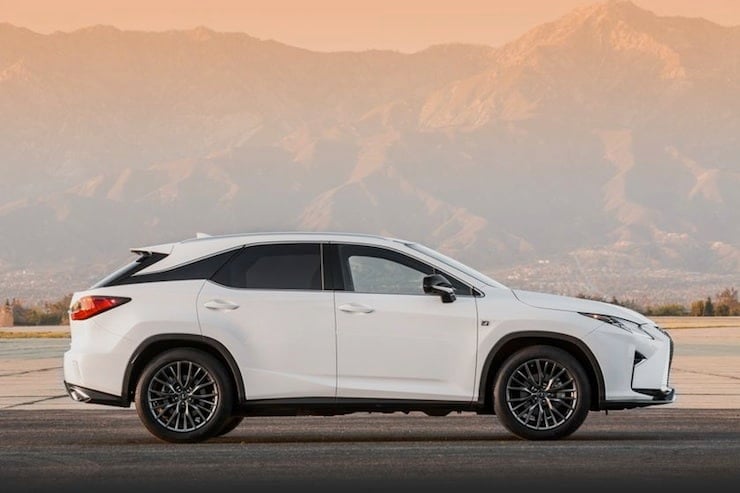 If you look at the 2016 Lexus RX hard enough, which broke cover at the 2015 New York International Auto Show, you are likely to cut yourself wide open from all the creases and sharp edges the new luxury SUV sports.

The 2016 RX has the standard Lexus spindle grille and the L-shaped lighting elements upfront that can be found on other Lexus offerings, homologating the design language across the brand’s lineup. There is a floating roof design thanks to a blacked-out C-pillar.

Underneath the shiny new and overly creased sheetmetal, the chassis has grown five inches in length while wheelbase is two inches longer than previously. Rear-seat legroom has increased with the SUV remaining a two-row offering

Under the hood sits a 3.5-liter V-6 mill producing a supposed 300 or so horsepower—final figures haven’t been confirmed yet. The engine is mated to the eight-speed automatic transmission once relegated to the F Sport trim in the SUV’s previous generation. Power can be sent to the front or all four wheels.

The RX450 hybrid will continued to be offered, though output has been upped as well for 2016—again somewhere around the 300 mark.

For those less concerned about fuel efficiency, there will be an F Sport offering with all-wheel drive. While output will not increase with the F Sport trim, active anti-roll bars, 20-inch wheels and steering-mounted shift paddles will be available. Other new features include a slew of safety technologies, a new panoramic-view  monitor, adaptive high beam headlights and a large moonroof.

While the RX is the latest Lexus offering to be sliced and diced, the form fits well as on the SUV. Expect to hit the streets later this year. Anthony Alanizhttps://anthonyalaniz.com/
Born and raised in the shadows of Detroit, Anthony has been writing about the automotive industry since 2008 — before the bailouts, bankruptcies and buyouts. Industry news and car reviews are Anthony's ammunition and working for outlets including CarandDriver.com, Revvolution.com, The Daily Telegram is the vehicle to deliver them. J-school graduate, weekend mechanic, car enthusiast and open-road connoisseur.
FILED UNDER:
New CarsAuto NewsLexusLexus NewsLexus RX

As far as proper, RWD sport sedans go, the Lexus IS has been a front-runner for two decades now. But it's the 2021 IS 350 F Sport you should care about.
Read more
Auto News

Designed to bring the Lexus brand message and ethos to the masses in a contemporary setting, INTERSECT BY LEXUS opens doors in New York with concept debut.
Read more