Finally, Mercedes-Benz blesses the S-Class with a lineup of cabriolets

Worth the 4 decade wait 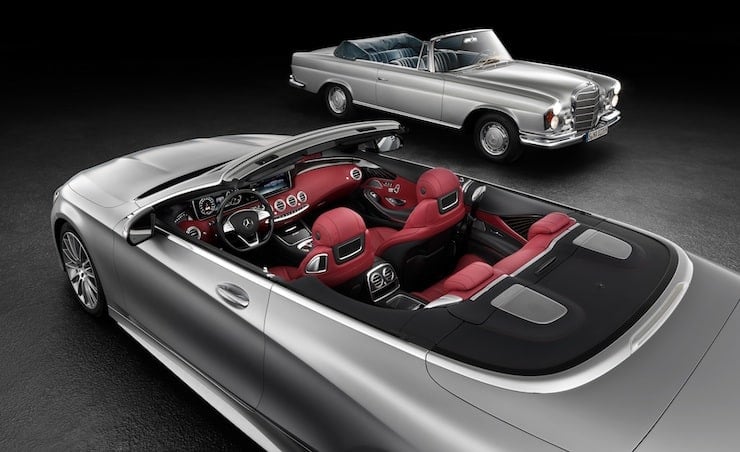 For the first time in more than 40 years, Mercedes-Benz has a convertible to park at the top of its lineup, with the Frankfurt auto show unveiling of its all-new, altogether-too-sexy S-Class Cabriolet.

Based on the S-Class coupe that debuted as a 2015 model, the new droptop offers the same choice of three trims that span a range from “pretty fast” to “holy s***.”

The line starts with the S 550, powered by a 4.6-litre turbocharged V8 making 449 hp and 516 lb-ft of torque, matched with a nine-speed automatic transmission and rear-wheel drive.

Step up to the mid-range Mercedes-AMG S 63 4MATIC

If you want all-wheel drive, you’re limited (poor you!) to the mid-range Mercedes-AMG S 63 4MATIC model, which gets its motivation from a 5.5-litre turbo V8 that cranks out 577 hp and 664 lb-ft through a seven-speed dual-clutch automatic.

Inside the exhaust system’s silencers are electric flaps that open up on hard acceleration, creating an “emotional” engine sound Mercedes says is a signature of its AMG division. We’d argue there’s no better-looking luxury convertible available now, and few options more opulent without blowing some extra dough on one of Bentley or Rolls-Royce’s ‘drophead’ models. And because a convertible should be driven top-down whenever possible, the car’s climate control system includes Benz’s ‘Airscarf’ neck-warming function and an ‘Aircap’ wind protection system.

Safety kit includes ‘pyrotechnically-controlled’ rollbars behind the rear headrests that deploy automatically if the car rolls over, and a ceramic composite brake system available on the S 63 that promises stopping power as impressive as the car’s acceleration. Chris Chasehttps://chrischasescars.com/
Chris has been writing professionally about cars since 2004, in print and online. He lives in Ottawa with his wife and two feline tyrants. In rare quiet moments, he can be found travelling or playing one of his way-too-many guitars. Chris is also a journalist member of the Automobile Journalists Association of Canada (AJAC).
FILED UNDER:
New CarsAuto NewsMercedes-BenzMercedes-Benz News

FCA is getting ready to make face masks for doctors, nurses and first responders working on the front lines of the coronavirus COVID-19 pandemic.
Read more
Camper & Trailer

The GLB is painting its target market with a broad brush: primarily forty-something families with a couple of kids and a dog. Read our full review.
Read more
Honda