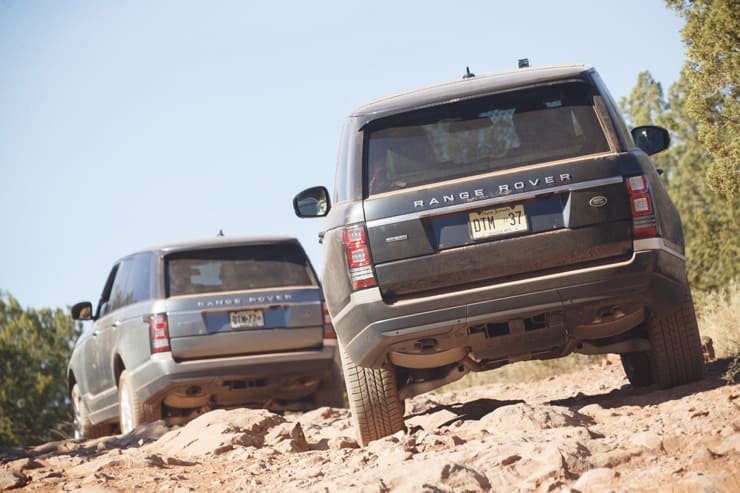 Sedona, AZ – Land Rover began as a company dedicated to building utility vehicles for farm and industrial use, so the storied enterprise has a long history of producing diesel powered vehicles. In fact, more than 50-percent of Range Rover’s global sales are equipped with diesel engines, and that figure rises to an astounding 90-percent when you consider the UK market on its own. In short, Land Rover is a company that knows what it is doing when it comes to designing, engineering and producing diesel technology.

However, until recently, there has been very little interest in introducing the technology to the North American marketplace as in many urban areas diesel was quite hard to come by and the fuel suffered from a reputation for being dirty. This is about to change, as the infrastructure is in now in place and with the aid of a host of technological aids, diesel fuel is able to burn very cleanly. For model year 2016, the stalwart company is set to roll two diesel powered models of its popular Range Rover sport utility into company showrooms- Range Rover HSE Td6 and Range Rover Sport HSE Td6. This move signals the company’s desire to offer diesel technology across the Land Rover lineup in the near future.

Under the broad aluminum hood you will find a 3.0-liter Td6 turbocharged V6 diesel engine which produces 254-horsepower and a prodigious 440-lb.ft of torque. Having access to plenty of low-end grunt on demand will prove advantageous for those Range Rover owners who use their vehicles to pull a horse trailer or boat (up to 7,716 lb.), as well as for those avid off-roaders who wish to do some off-tarmac exploring. .  In the case of the Td6, torque is readily available at engine speeds as low as 1,750 rpm.

The Td6 is an evolutionary engine designed in house to provide maximum performance and optimal efficiency, but it was also deemed important to ensure that it was refined enough to suit the wants and demands of Range Rover’s affluent clientele. The engineers responsible for the design constructed the Td6 using Compacted Graphite Iron (CGI) which offers a higher tensile strength than traditional cast iron and better fatigue strength than an aluminum design. It’s compact in size and lighter than its gasoline counterparts- two factors that help keep the overall weight of the vehicle in check and thus improve fuel efficiency.

Both Td6 models are mated to a well sorted ZF-engineered, eight-speed automatic transmission. This smooth shifting gearbox helps deliver the Td6’s low-end torque as efficiently as possible and the Range Rover Sport will sprint from a standstill to 100 kilometres-per-hour in a very respectable 7.6 seconds, while the slightly larger Range Rover will accomplish the task in 7.9.

Early adopters will appreciate that the Td6 engine offers improved fuel efficiency over the company’s two gasoline powered supercharged engines- the 3.0-litre V6 and the 5.0-litre V8- and is capable of delivering an impressive combined rating of 30 miles-per-gallon (which represents a 32-percent improvement over the company’s own gasoline powered V6), and up to 35 mpg on the highway.

In an effort to ensure that emissions are kept to a minimum, every aspect of the Td6 engine has been optimized. The engine employs a Selective Catalytic Reduction (SCR) system which uses Diesel Exhaust Fluid (DEF) to reduce NOx emissions. It also utilizes a Low Pressure Exhaust Gas Recirculation (EGR) system which takes gases at low pressure and feeds them back to the engine’s turbocharger inlet. These gases then pass through an intercooler which helps produce a lower peak combustion temperature and reduces the level of NOx produced.

With the arrival of the proven Td6 engine North American consumers will finally have the opportunity to see Range Rover at its best, and parent company Land Rover is better equipped to stave off increased competition from both Europe and Japan.

Unfortunately diesel engines have a bad reputation in North America for generating excess noise. This wide-held misconception has been garnered over the years due to our limited exposure to diesel powered vehicles, the majority of which are heavy commercial trucks and poorly maintained pick-ups. In an effort to change this, the design team at Land Rover worked overtime to ensure that the company’s diesel models would deliver traditional Range Rover refinement. To further reduce noise levels the Td6 engine sits on dual-isolation engine mounts and the vehicles benefit from a specially designed bulkhead that insulates the cabin from excess mechanical noise, while a special acoustic laminate was engineered to fabricate the windshield.

During our evaluation it became obvious that these measures work exceptionally well as there is just a hint of diesel engine clatter at around 1,500 rpm when operating at low speeds.

The folks at Land Rover have big plans for diesel in both the United States and Canada, so the Range Rover Td6 platform has run in excess of one million miles in North America prior to it being offered for sale in the market.

Range Rover is presently the fastest growing luxury brand in North America, and with the addition of the two diesel variants to expand the catalog of offerings, this trend is likely to continue as the product will appeal to an even broader segment of the consumer market.

By selecting the diesel option the initial purchase price of the vehicle will increase by $1500, but this extra cost is offset by substantial fuel savings and the fact that the diesel variants will maintain a higher residual value over their gasoline counterparts. This latter fact is also expected to result in a lower monthly lease payment and a higher resale value for the Td6 equipped vehicles. Other Innovations for the 2016 Td6

While the arrival of the diesel power plant is big news, there are several other innovations on board for 2016 to further enhance the driving experience, utility, and passenger comfort. Range Rover models are renowned for their near legendary all-terrain prowess, but the magicians at Land Rover have added a new system called All-Terrain Progress Control which allows the driver to select a course speed between 1.1 and 19 miles-per-hour, in both forward and reverse, by using the cruise control function. After spending some time behind the wheel of a Range Rover equipped with the ATPC system in very challenging terrain, I will admit that having it on board helps to alleviate much of the stress that comes with driving a vehicle in less than ideal conditions.

Large sport utility vehicles can be difficult to get in and out of, so in an effort to make passenger ingress and egress a little easier all Range Rover models now come standard with a system called Automatic Access Height Control. This clever system will automatically lower the vehicle’s ride height as soon as the engine is switched off. It will then drop even further (to a full 1.9 inches) when the driver unfastens his or her seatbelt and opens the door.

Owners of sport-utility vehicles tend to haul cargo on a regular basis. As a result, they will soon appreciate the addition of a convenience feature called Hands-free Gesture Tailgate. With keys in hand (or pocket) an individual can signal the rear hatch to open by merely waving his or her foot under the rear corner of the vehicle. By placing the sensors in the corners rather than the centre panel there is much less chance of the operator getting struck by the up-swinging hatch.

The Range Rover platform has been evolving for over five decades, and during this period the brand has established a loyal following and a solid reputation for its build quality, ride comfort, and unparalleled off-road capabilities. With the arrival of the proven Td6 engine North American consumers will finally have the opportunity to see Range Rover at its best, and parent company Land Rover is better equipped to stave off increased competition from both Europe and Japan. Russell Purcellhttps://www.flickr.com/people/autoexposurecanada/
Russell Purcell is an award-winning automotive journalist and photographer based in Vancouver, B.C. His passion for automobiles was sparked at the tender age of six, when a family friend gave the wide-eyed first grader a ride to school in a track prepared Porsche 911 RSR. He continues to fan the flames by building an impressive library of automotive related books as well as a vast collection of interesting automobilia and motoring artefacts. Russell is a member of the Automobile Journalists Association of Canada, and is active on Twitter as RoadTestRuss.
FILED UNDER:
SUV and Crossover Reviews2016 SUV and Crossover ReviewsNew CarsCar ReviewsLand RoverLand Rover ReviewsOff-Road VehiclesRange RoverRange Rover Reviews

What's the difference between the Telluride and Sorento SUVs? Kia's two big sport utiities offer cargo, capability, and tech but are not alike in many ways.
Read more
Chevrolet Silverado

If celestial bodies & special edition luxury SUVs are your thing, the Range Rover Astronaut Edition, based on the Autobiography, is calling your name.
Read more
Mitsubishi News

Next-gen SUV wagon with nothing to prove. The 2019 Subaru Forester gets new engine & more space to cement position as capable alternative to mainstream SUVs.
Read more