Review: At a competitive price, the 2017 Kia Cadenza Limited brings comfort, luxury and technology to the table for consumers looking for an affordable sedan.

Los Angeles, California – Hyundai has started to shake up the premium establishment with its Genesis luxury sub-brand. We can expect more plaudits when the G70 arrives in a year or so as a rival to the 3 Series, C-Class et al. With former BMW M executive Albert Biermann now involved in chassis development at Hyundai-Kia, there’s every chance that it’ll have the driving experience to match its premium aspirations.

But Genesis isn’t the only division of the Korean company that’s building credible luxury cars. We were impressed with the flagship K900 when it appeared a couple of years back; now that luxury-meets-value philosophy has been replicated in the Cadenza Limited, the range-topping version of the Avalon, Maxima and Malibu/Impala-rivaling sedan that appeared late last year.

Chief design officer, Peter Schreyer sorted Kia’s styling out years ago and the second-generation Cadenza – designed by the company’s California studio – continues the run of clean-looking designs that look more expensive than they are. This Limited model has a different grille to lower-end variants, featuring chromed vertical elements. The Z-shaped front and rear LED lights are distinctive and well executed. Aside from a sleek new exterior, the Korean-built, 2017 Cadenza benefits from a stiffer, lighter structure. That enables chassis engineers to tune the ride and handling with more finesse, since the settings aren’t compromised by a need to compensate for structural shortcomings. The attached suspension has been upfitted with amplitude selective dampers, which react differently to low-speed and high-speed inputs, and hydraulic rebound stoppers that help snuff out heavy impacts from poor surfaces.

The 3.3-liter, 290-horsepower V6 is common to all Cadenzas and has been tweaked for better fuel economy. Over three days we got 25mpg (US) on mixed highway and city driving, including several hours in slow-moving LA traffic. That’s a little better than the quoted combined figure of 23mpg. The V6 is paired with a new, in-house 8-speed automatic gearbox with shift paddles on the steering column.

The structural and suspension enhancements, not to mention work to increase isolation and reduce noise, vibration and harshness (NVH), have not been in vain. The Cadenza Limited exhibits K900-like quietness in the cruise and is comfortable but not floaty over the bumps. There’s no harshness or shake from more aggressive impacts, either.

The steering precision is a world away from Kias of yore – and the development team is reported to have further improved on-center feel in this new generation – but I still found myself correcting the course far more often than I would have liked on the highway. It’s not supposed to be a sports car, but when treated more aggressively on some twisty roads in the hills around Malibu, the Cadenza didn’t throw up any unpleasant surprises.

The engine does everything that’s expected of it and is never intrusive. It’s a measure of how well it’s matched to the ratios of the smooth new 8-speed transmission that you never feel like you’ve been caught in the wrong gear. This isn’t a car in which you’ll regularly want to switch to the paddle shifters, but they do the job if you’re in a manual mood.

One of the Cadenza Limited’s strongest cards is the suite of advanced driver assistance systems (ADAS). These work together seamlessly and with a level of intrusion that’s spot on: there for you when you need them, but not irritating when you don’t. A smart cruise control that will brake you to a standstill and move off again, forward collision warning, autonomous emergency braking (AEB), lane departure warning, rear cross traffic alert and surround-view maneuvering camera are all included. All were tested with the exception of AEB, for safety reasons.

A Kia first is the smart blind spot detection system, which will halt an unintended drift toward an adjacent vehicle by braking the opposite-side front wheel to help correct the course, and lane-change assist, which warns of vehicles approaching from behind. Blind spot detection systems get little rest on LA’s crowded highways and this one was no exception; given the poor blind spot visibility over the driver’s shoulder, that was no bad thing. No question about it, the Cadenza Limited’s cabin is a very luxurious place to spend a journey. There’s plenty of adjustment in the driver’s seat and steering wheel so it should be no problem to find a comfortable driving position. The brown Nappa leather on our test car oozed premium feel and the build quality felt Lexus-solid. Like all such installations, the panoramic sunroof floods the cabin with light, but makes it a hot place to return to when left parked on a sunny day.

The UVO infotainment system is easy to use, with good sound from the Harmon/Kardon audio setup. The GPS graphics are high quality, with guidance forming part of the useful head-up display as well as appearing on the central screen. Unfortunately the system didn’t appear to take account of traffic conditions when initially predicting journey times; if you prefer to use your smartphone’s software, Android Auto and Apple CarPlay are standard.

I should preface my verdict by noting that Kia not only has its US headquarters in Irvine, Southern California, but a test base in the nearby Mojave desert. In short, if its cars don’t work here, the very place where they were tested for the US market, they won’t work anywhere.

But these are also some of the most demanding road conditions in North America. Manufacturers bring their prototypes from around the world to run on the hot, crowded, broken roads of LA, and the Kia didn’t miss a beat. If you’re looking for a stylish, luxurious, comprehensively equipped sedan at a competitive price – US$45,290 – it’s hard to find fault with the Cadenza Limited. It’ll never be a Mercedes-Benz for customers who can’t do without an established premium badge, but savvy buyers will know that they’ve snagged themselves a bargain. 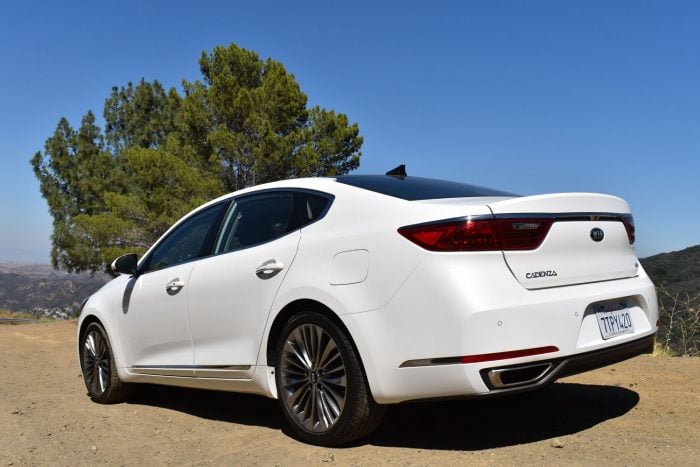 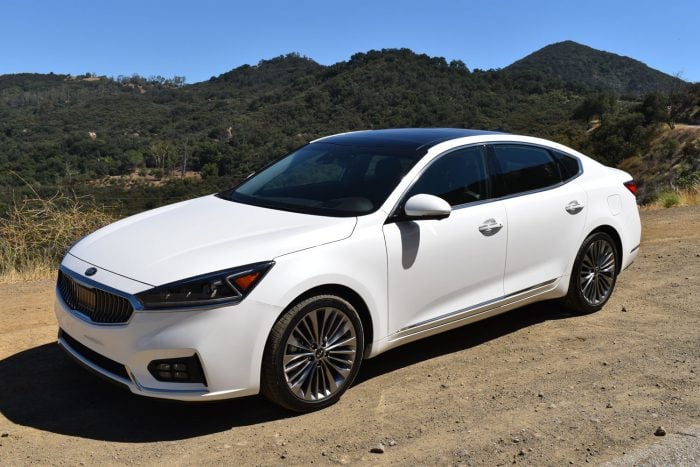 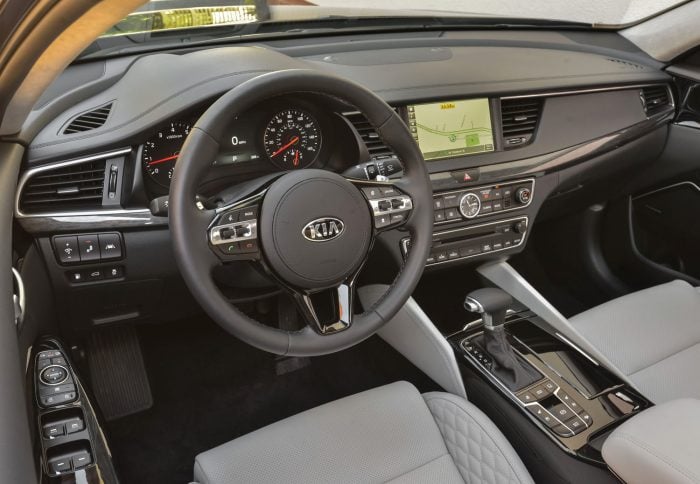 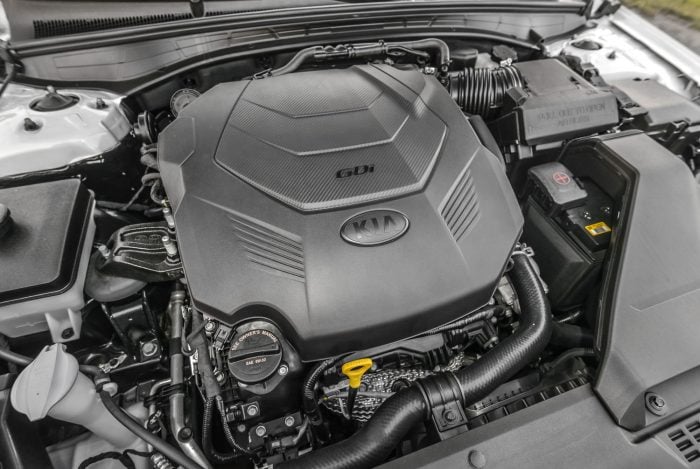 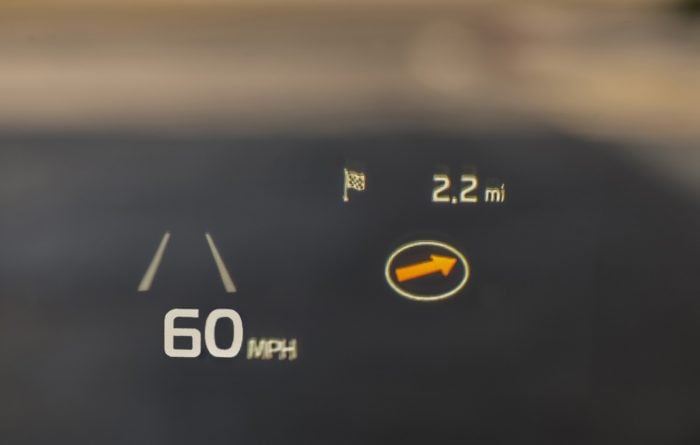 Does the 2021 Acura TLX A-Spec SH-AWD offer the engagement at everyday speeds that you'd expect from a 'sports sedan?'
Read more
Subaru Legacy

If you're in the market for a Kia SUV or crossover, here are all 5 models you need to know about. Including Soul, Seltos, Sportage, Sorento & Telluride.
Read more
Subaru Legacy