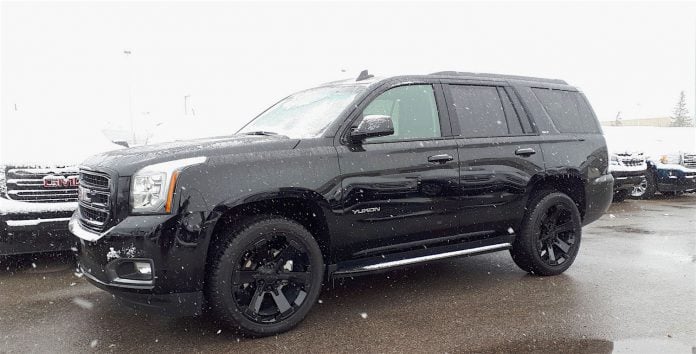 The GMC Yukon and Chevrolet Tahoe have long dominated the body-on-frame, truck-based SUV market in North America. The current generation appeared in 2014 (with a Yukon refresh in 2018) and the two models together continue to outsell their main rival, the Ford Expedition, in Canada.

The Ford is rapidly gaining market share however and its Canadian sales were up almost 50% year-on-year to the end of August thanks to a much-improved new model (see our review here).

GM has kept its contenders current by adding new technology and trim packages before all-new vehicles arrive, expected to be as 2021 models. We sampled the latest Yukon SLT Graphite Edition to see how the old campaigner measures up.

There’s also Magnetic Ride Control and some of the latest dashboard electronics. Together, the two Graphite packages add around C$11,000 (US$9,000) to the SLT’s base price.

If you like that Secret Service look then the GMC Yukon Graphite Edition could be the vehicle for you. With Onyx Black exterior paint, all-black trim detailing like the black chrome grille mesh inserts and 22in black aluminum rims, the Yukon has considerable road presence. Subtle it ain’t.

The two-box shape itself hasn’t worn too badly but it looks a little old-school alongside the sleeker Expedition. Some buyers might prefer it that way.

The SLT already comes with a host of interior upgrades over the base SLE, among them leather upholstery, heated outboard second-row seats (always a winner with the kids), power-operated second and third-row seats, steering column and tailgate, and a suite of driver-assistance systems. There’s also a Bose sound system, wifi hotspot and the obligatory Apple CarPlay and Android Auto compatibility.

The Graphite Performance Edition package adds more to that list to take the SLT closer to the Denali in specification, including a useful head-up display and a reconfigurable instrument panel. We didn’t like the way the fuel gauge is lost among three others in the ‘standard’ theme, but you can change it. Another element of the package is a navigation system for the 8in central screen whose graphics felt a little last-decade.

Yet more interior content comes from the Sun, Sound and Destination package fitted to our test vehicle, which brings a power sliding glass sunroof and wireless rear-seat entertainment for an extra C$3,600 (currently discounted to US$2,345 in the States).

Overall, we felt the interior was a triumph of specification over quality. There’s lots here, but for a vehicle that retails north of C$85,000 (US$73,000 before discounts) once you’ve added all these options, the design, materials and build quality need to be better.

Our Yukon had a couple of low-grade, wobbly trim pieces that might have been acceptable in a C$30,000 Terrain but were out of place in a premium-priced product. It offers nothing like the cabin experience of, say, a Ram 1500.

It’s easy to get comfortable in the Jet Black driver’s seat and the view ahead is good, but rear visibility isn’t the best and, like the Expedition, the Yukon has a huge blind spot thanks to a chunky B-pillar that’s right where your over-the-shoulder view should be. We made good use of the standard blind-spot information system, but it was a shame it threw up unhelpful alerts when sitting stationary in traffic.

The Yukon suffers from the old truck-SUV problem of a high rear floor, but second-row passengers still reported good comfort, head- and legroom. Occupant space in the third row – an area where the newer Expedition impressed – is less generous, however. And with those seats in place, you won’t get much in the trunk unless you buy the stretched Yukon XL. At the risk of repeating ourselves, buy a van if space is your top priority.

Don’t be fooled into thinking that their M+S mark will always keep you safe in winter, either – we rounded a turning at very low speed on a snowy day and the 2,586kg (5,701-lb) Yukon plowed straight on. The cold-weather handling and braking performance of proper, snowflake-marked winter tires apply just as much to 4WD SUVs as they do to 2WD compacts.

The Yukon SLT with the Graphite Performance Edition package comes with a higher, Denali-like 3.23 rear-axle ratio. The towing capacity for the 4WD model is 3,677kg (8,100 lb). A trailer brake controller is also part of the package.

Truck buyers will be familiar with the 6.2-litre, 420 HP V8. Despite the presence of direct-injection and variable valve timing, it seems a little optimistic to use the Ecotec badge on a motor that makes a claimed 13.8L/100km combined (20mpg), but that’s not a bad number for a vehicle of this size and weight. Bear in mind, however, that the maker recommends the use of more expensive premium unleaded fuel to get the best from the engine.

Despite the 460 lb-ft of torque, we were a little disappointed with the powertrain’s performance. In particular, we felt that the 10-speed auto, although smooth-shifting, was slow to kick down, leaving you with the feeling that, for all its power, the 6.2/10-speed combo lacks the responsiveness of the Ford EcoBoost setup.

Due perhaps to the presence of the sophisticated magnetic dampers, our Yukon was a pretty comfortable place to ride, but don’t expect the full magic carpet treatment from a body-on-frame SUV on 22in wheels. The body was under better control than we expected, though, and the degree of roll in normal cornering is more than acceptable. The steering is light and a little lazy, as you’d perhaps expect from a vehicle of this type.

The steering is light and a little lazy, as you’d perhaps expect from a vehicle of this type.

The biggest frustrations on the road were actually the driver-assistance systems, which had an underdeveloped feel. In particular, the hyperactive forward collision alert system and comically cautious rear backup sensors, which feed a buzzing vibration through the driver’s seat when you’re still a good five feet from an impending obstacle, seemed particularly poorly calibrated.

Buyers migrating from car-based SUVs might not be keen on the column shifter and resulting left-stalk wiper switching, either. The controls aren’t intuitive and really ought to be on the right-hand side of the steering column.

Takeaway: is the Yukon Graphite Edition worth it?

You can’t fault the Yukon Graphite Edition’s equipment list, but we felt that high-spec, low-grade wasn’t a convincing return for our test vehicle’s C$86,380 sticker price. It’s in the interior in particular where the Yukon falls short: no amount of extra tech can hide aging, somewhat uninspiring design and compromised packaging.

If you don’t need the Yukon’s truck-like ruggedness and towing capacity then for the price, manufacturers such as Audi or Volvo do it better for buyers who expect a more premium experience.

For now, the Expedition has the measure of the Yukon in the battle of the domestic full-size SUVs, but GMC will no doubt be competitive again when the all-new model arrives. Perhaps one day we may also see a new entrant based on the Ram 1500, whose outstanding cabin quality and refinement, if transferred to SUV form, could really shake up the segment.

Sure, the GMC Yukon Denali increases luxury for 2021 but it's the rugged Yukon AT4 getting us excited. Expect redesigned look, new interior & big 6.2L V8.
Read more
GMC Sierra

We like the new RAV4’s more substantial appearance, but that look hints at a driving character that’s less refined than the outgoing model.
Read more
Chevrolet Blazer

A redesigned 2020 Highlander is coming so is the 2019 mid-size SUV model worth buying? We review the popular, mid-range Highlander XLE trim.
Read more
Honda