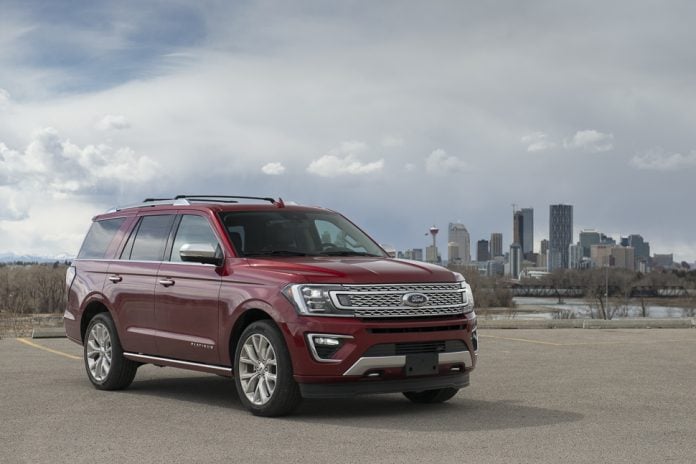 Ford F-Series trucks have been the best-selling vehicles in North America for decades. The rise in popularity of crew-cab variants have made them more practical as family transport, too, but for many families, something a little more car (or SUV)-like is still required. Is an SUV based on F-150 running gear the answer?

By the time it was replaced for the 2018 model year, the previous-generation Ford Expedition was more than a decade old and struggling to compete with its body-on-frame rivals from Chevrolet and GMC.

The new model, however, has been a smash hit, especially in the US, where retail sales were up 35% in 2018 as the Expedition increased its market share by 5.6%. The factory in Louisville, Kentucky, will increase production by 20% this summer to meet demand.

All have turbocharged, 3.5-liter EcoBoost V6 engines and Ford’s new 10-speed automatic transmission. Canadian Expeditions are 4WD, but RWD is standard in the US – 4WD is a US$3,150 option.

The new Expedition’s styling is light years (well, a decade) away from its predecessor’s. To this observer it’s neat, modern, and about as sleek as a three-row, truck-based SUV is ever going to be.

There’s an appropriate mix of cues from other Ford SUVs and trucks. Power retractable running boards keep the lines clean on the move, there are LED head, fog and taillamps, and a mix of satin and bright metal accents add a touch of bling.

For buyers looking for a luxurious, 8-seater SUV, the Expedition has an attractive sister vehicle in the form of the new Lincoln Navigator. But in the Platinum grade at least, the Expedition will still give more prestigious nameplates a run for their money.

The dashboard design shows some similarity with F-Series trucks, but the interior has some plush wood and leather trim and a 12-speaker Bang & Olufsen sound system that wouldn’t look out of place in a luxury car.

The connectivity options are right up to date, too, with myriad USB sockets, a 4G wifi modem and wireless charging.

Ford’s Sync 3 touchscreen interface is proven and easy to use. The physical switches are mostly solid; perhaps not everyone will like the chunky rotary dial for the transmission, but we did.

The only cabin let-downs were a fiddly electric parking brake switch that’s buried down by your left knee (we’re not convinced of the merits of EPBs, anyway) and a single column stalk on the left side of the steering wheel, when we would have expected wiper controls to be on the right.

It’s easy for the driver to get comfortable and the view ahead and behind is good, but we were almost undone by the sizeable blind spot, despite looking over our shoulder when pulling out. The Expedition comes with a standard blind-spot information system (and rear cross-traffic alert); we recommend using it.

Captain’s chairs in the 2nd row

Passenger accommodation in this particular Expedition was reduced from eight to seven seats by the C$800 (US$740) addition of second-row captain’s chairs. They’re powered, heated and comfortable. Three-zone climate control should keep everyone happy, but the second-row blower is noisy.

Legroom is excellent throughout the cabin – Ford claims the interior space is class leading – including in the third row of seats, which are also power adjustable. It’s roomy back there, thanks in part to the Expedition’s independent rear suspension, and the second row’s tilt-and-slide feature makes it easy to get in and out of the back.

Unfortunately, with the third row in place, the otherwise satisfactory cargo space all but disappears – we struggled even to accommodate ski equipment for six. You certainly won’t be going on an expedition with an Expedition-ful of people unless you’re towing a trailer (more on that in a minute). As ever, if outright space is all that matters, you need a van, not an SUV.

Part of the Expedition’s appeal is that it retains some of the versatility of a pickup truck – utility that more car-like, unibody SUVs will struggle to match. 4WD models come with switchable low range, a 3.31 final drive ratio and have a towing capacity of 2,948kg (6,500 lb).

The 3.5-liter EcoBoost motor is familiar from other Ford SUVs and trucks and continues to do good service in the Expedition. In the Platinum it’s offered with 400 HP (lesser grades get 375) and 480 lb-ft of torque (470).

In a further carryover from the F-150, the V6 is paired with the latest 10-speed automatic transmission. It’s a terrific combination that shifts smoothly, provides ample oomph for overtaking and is whisper-quiet in the cruise.

It’s more than 5m (16.4ft) long, 2m (6.5ft) wide and weighs 2.5 tons, but even so, its consumption isn’t much worse than many of the car-derived, three-row SUVs that sell in far greater numbers.

Driving impressions: how does the big Ford SUV handle?

You’ll enjoy cruising quietly in the Expedition Platinum’s comfy cabin. For a truck-based vehicle, it also steers pretty nicely, and body roll is very well controlled, thanks to the all-independent suspension and adaptive damping.

But while there’s no harshness, it does still ride more like a truck than a car. Even fully laden, the body control is very relaxed, so it takes a couple of bounces to recover from longer peaks and depressions, while the hefty, 22in rims thump across sharper bumps and holes.

Once again, however, we think that Expedition buyers are likely looking for qualities other than a car-like driving experience.

Takeaway: Is the 2019 Expedition Platinum worth it?

For years, Ford’s domination of the full-size pickup market wasn’t matched by its offering in the full-size-pickup-derived SUV market. That’s all changed with the new Expedition.

Buyers are sure to be attracted by frame and drivetrain commonality with the F-150, but Ford has been smart enough to make the Expedition an attractive vehicle in its own right.

It’s less of a truck to drive than you might expect, it’s beautiful inside (at least in the swanky Platinum trim), it comes with the latest connectivity and driver-assistance tech and, suitably specced, it’ll check the heavy towing and off-roading boxes, too.

Photos of the top-range 2019 Expedition Platinum 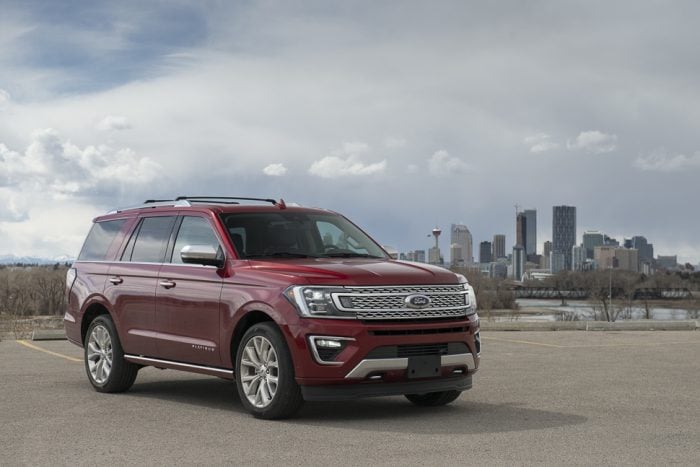 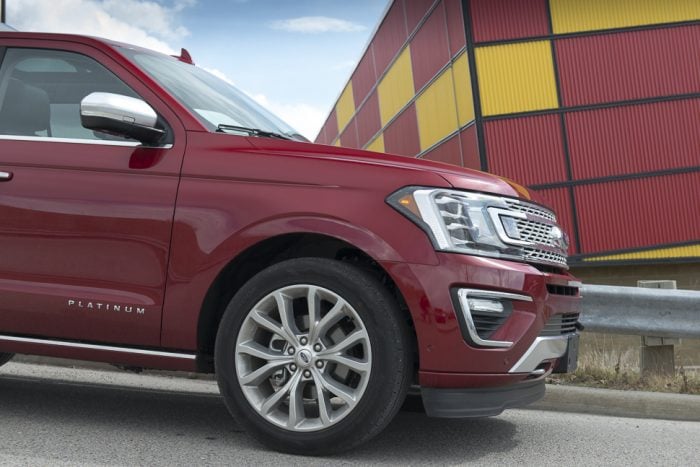 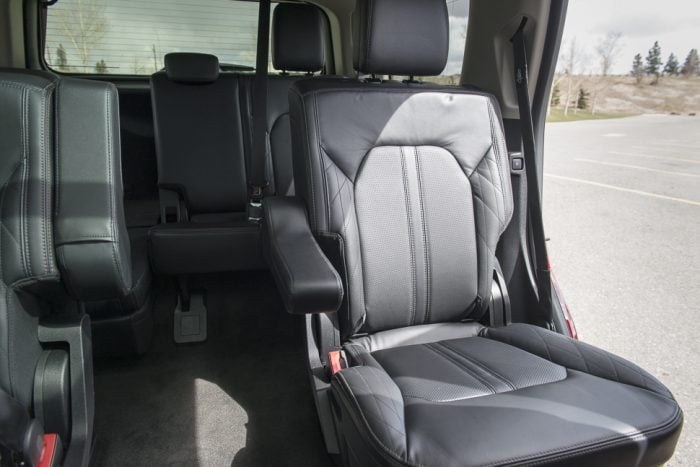 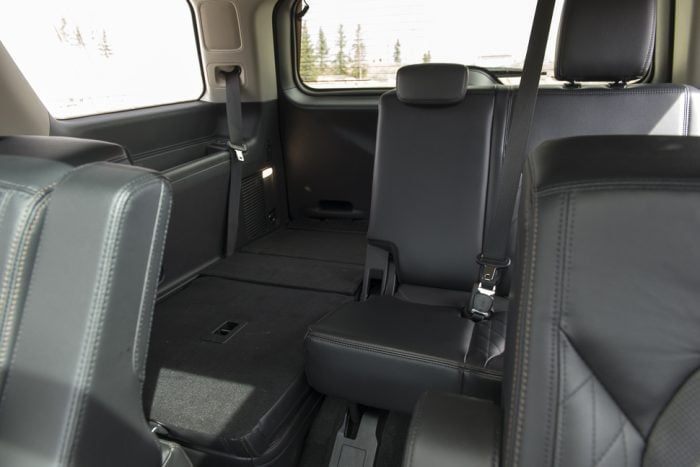 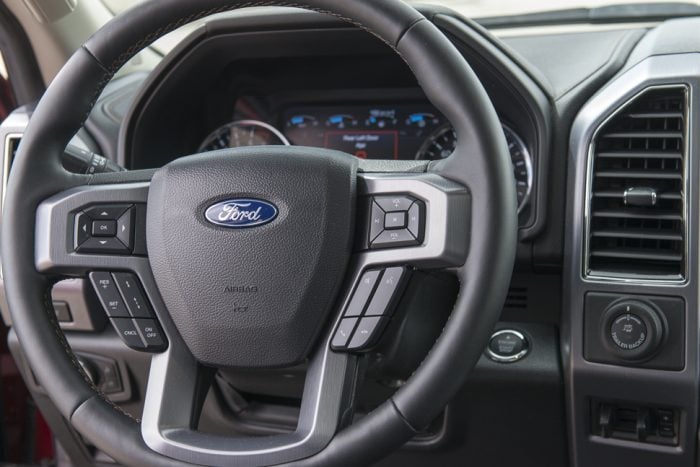 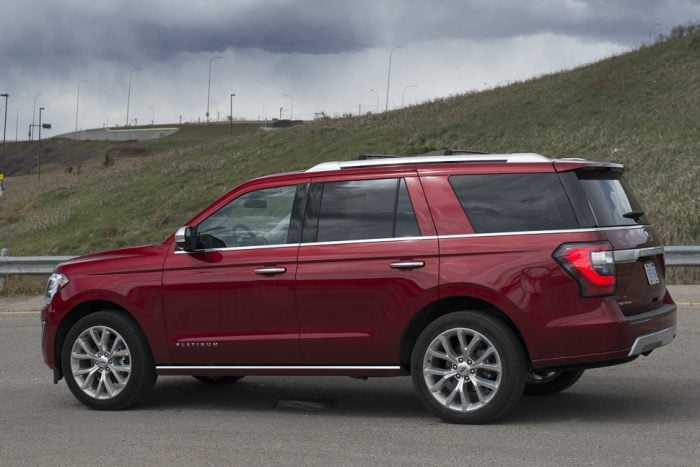 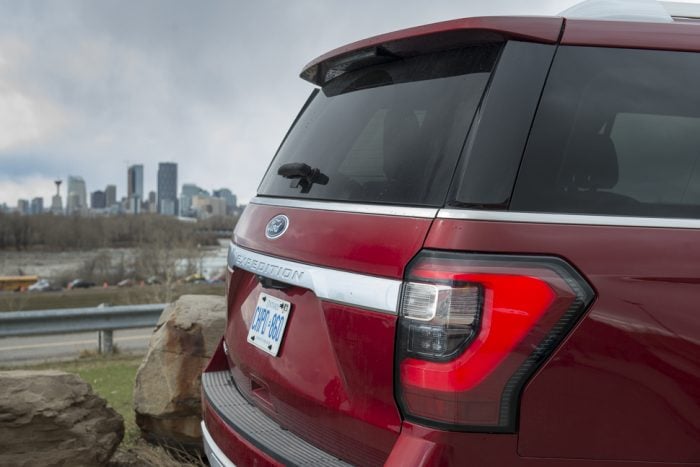