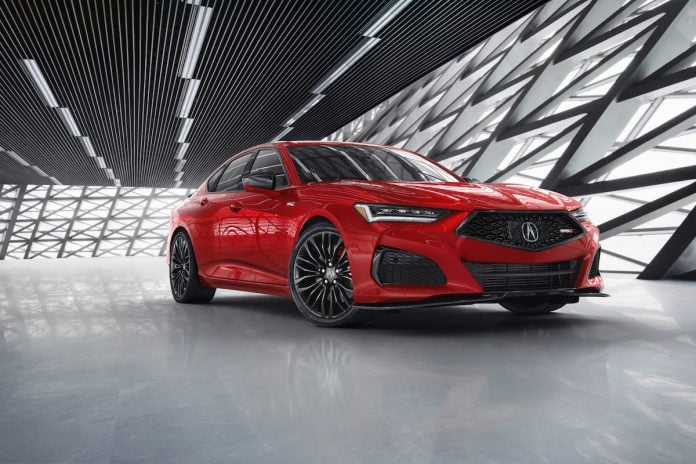 Acura this week revealed the 2021 TLX, the latest generation of its mid-size luxury sedan, ahead of its market launch late 2020. The company says the TLX’s all-new design and turbo engines will make it the best-performing and most well-appointed sport sedan in the brand’s history.

The TLX debuted in 2015 as a replacement for the long-lived TL, which Acura sold for nearly two decades. Both the TL and TLX build on a legacy started by the Acura Vigor in the early 1990s.

The new TLX base model uses a 2.0L turbo four-cylinder engine, related to that in the RDX SUV and Honda Accord, with 272 hp and 280 lb-ft of torque, upgrades of 66 hp and 123 lb-ft compared to the outgoing car’s 2.4L engine. The 2.0L also makes more torque than the old TLX’s optional V6.

Acura will follow up next year with a performance-tuned TLX Type S, to be powered by a brand-new 3.0L turbo V6 engine. The company will reveal the turbo V6’s full specs and power figures closer to when the TLX Type-S launches.

Both engines will come matched with a 10-speed automatic transmission and Acura’s Super Handling All-Wheel Drive (SH-AWD) system. This high-tech system can send as much as 70 per cent of the engine’s power to the rear axle, which can then send all power to either the left or right rear wheel depending on road and driving conditions to further aid handling performance.

The 2021 TLX looks more dramatic than the old TLX, sporting a long hood and a fastback rear end that disguises the car’s traditional sedan configuration.

Many of the car’s styling details were previewed in the old TLX, including the shape of its head- and taillights, and the brand’s trademark diamond pentagon grille.

Inside, the new TLX shares some elements with the RDX compact crossover, most notably the pushbutton transmission and rotary drive mode controls in the centre stack. Also significant is the TLX’s move to a single straightforward touchscreen for the car’s entertainment and navigation controls.

The new TLX is longer and wider than the car it replaces, but stands 14 mm lower. There is marginally more passenger and cargo space. We suspect the new TLX will once again be classified as a compact sedan for the purposes of Natural Resources Canada’s fuel consumption ratings.

Fifty-six per cent of the TLX’s body consists of what Acura calls advanced lightweight materials. Those include aluminum in the hood, front bumper, fenders and damper mounts which, along with placing the battery in the trunk, moves the car closer to a balanced front/rear weight balance.

There’s also a new electro-servo brake system adapted from the NSX sports car that Acura says allowed engineers to more finely tune stopping performance. In the forthcoming Type-S, that will be bolstered by larger rotors and four-piston Brembo calipers.

Entry-level TLX models wear 18-inch wheels – one inch larger than the outgoing car – that can be optioned to 19s and, in the Type-S, 20-inch wheels.

All TLX trims come with the AcuraWatch driver assist suite. This includes adaptive cruise control with traffic jam assist, driver awareness monitor, and traffic sign recognition, all of which are geared toward reducing driver stress in congested highway driving.

Chris Chasehttps://chrischasescars.com/
Chris has been writing professionally about cars since 2004, in print and online. He lives in Ottawa with his wife and two feline tyrants. In rare quiet moments, he can be found travelling or playing one of his way-too-many guitars. Chris is also a journalist member of the Automobile Journalists Association of Canada (AJAC).
FILED UNDER:
AcuraAuto NewsAcura NewsFeatured

The 3.0L EcoDiesel V6 will give Jeep the most powerful diesel in the mid-size class & highest torque rating of any small pickup upon official release date.
Read more
Mazda

Expect a 2021 Ford F-150 redesign to look not much different than its predecessor, but offers precisely what truck buyers need from a tech viewpoint.
Read more
Cadillac

Land Rover and Autohome team up on the new Defender 110's first, official roof tent for the serious overlanders. A premium Defender tent at close to $3,500.
Read more