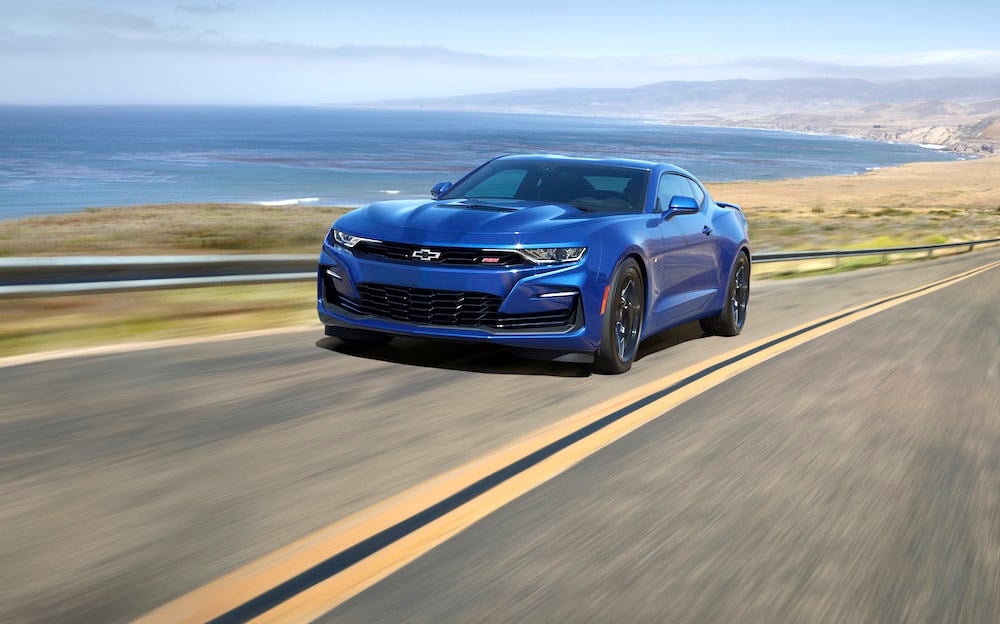 The new Camaro may still be in its 6th-generation guise since 2016 but the popular American muscle car gets a few hefty updates for 2020 — from a new 10-speed transmission paired to the 3.6L V6 and a new LT1 V8 model, to a new Camaro SS front-end facelift improving the sports car’s appearance compared to the 2019 SS.

As Chevy puts it, “These updates to our offering mean we have a Camaro available for every type of buyer…From the base model that’s affordable and fun to drive, to the SS performance model for the racing enthusiast, all the way up to the fully loaded ZL1 for the track warrior.”

When does the new Camaro go on sale?

From a distance, the 2020 SS may look the same from the front, as seen in the lead picture above. But up close, it’s clear the burly pony car looks different enough to turn some heads.

Based on the Camaro Shock concept from the SEMA Show last year, the new Camaro SS finds a repositioned bowtie emblem in the upper grille and a body-colour bar between the upper and lower grilles.

On the outgoing 2019 SS, the Chevy logo looked a bit out of place, sitting alone on a skinny black bar (now body-coloured) that split the upper and lower grilles. Now, the emblem looks better along with the new colour-matched bar.

Available in either a coupe or convertible flavour, if the standard 6-speed manual isn’t doing it for you, there’s now a 10-speed automatic transmission option for all 2020 3.6L V6-powered Camaro LT models.

Before, both the Camaro SS and ZL1 models got the 10-speed upgrade but Chevy felt the V6 needed the same love, and it’s easy to see why considering this will likely be the bigger seller.

In a world of economical V6s replacing large engines it’s nice to see the V8 still getting some love. For 2020, Chevy is claiming their new LT1 Camaro will be their most affordable V8-performance version yet, though pricing hasn’t been announced.

The new LT1 will put down 455-hp and combines the look and features from the Camaro LT and SS models, including LT exterior styling combined with the SS’s vented hood and LT1 fender badges and black bowtie emblems.

Takeaway: Is Chevy’s new Camaro worth it?

Despite a major redesigned since 2016, the Camaro continues to add significant changes with each year. The outgoing 2019 Camaro also saw three big updates and now the 2020 model takes things even further.

End of the day, Chevy is ensuring there’s a Camaro for everyone, whether it’s a V6, an affordable V8, a better looking SS, or the track-built ZL1. And that’s a good thing, for everyone.