Huge hauler with bold design (and it's from Hyundai) 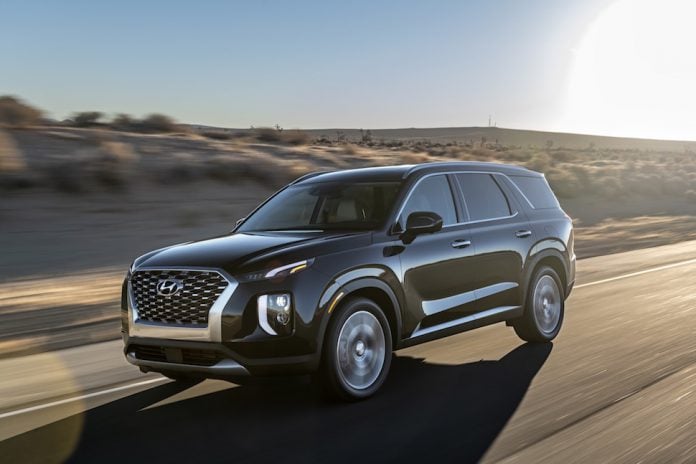 Los Angeles, California – With six SUVs in the lineup now, the full-size Palisade just announced and, according to Hyundai America chief operating officer Brian Smith, another on the way, is Hyundai transitioning from a car company that makes SUVs to an SUV company that also makes cars?

Currently, there are six in the North American pipeline: the Nexo fuel-cell crossover, the Tuscon, the Santa Fe, the Kona, the Kona EV and the Santa Fe XL. Palisade is seven and Smith said one more is coming.

The count may not as yet have overtaken its cars (eight), but that’s certainly where the market is headed.

The Palisade is bigger than anything Hyundai has built to date, even the short-lived Veracruz. It has seating for eight and, even with eight people, 509 litres of cargo room. That grows to 1,296 litres with the third row folded.

Its styling is bold, with a massive front fascia, huge vertical daytime running lights and a gaping grille. It’s also pushed out to the corners, for a rather boxy but not unattractive shape.

It embodies a break with tradition, as well. Lead designer SangYup Lee said that unlike some carmakers who try to make each model look like a smaller or larger version of its sibling, Hyundai is aiming to share design cues but not copy them.

So while the Santa Fe, for instance, has daytime running lights that sit like eyebrows above and separate from the headlights, the Palisade’s begin in the eyebrow position but carry through down to the headlights.

The Palisade also aims to take a chunk out of the premium large SUV segment, with premium touches including power reclining third row seats, quilted leather upholstery and a premium feel to the dash, centre console and related components.

Under the hood, the Palisade doesn’t break much new ground: a 3.8-litre V-6 motor delivers 291 horsepower at 6,000 r.p.m. and 262 pound-feet of torque at 5,000 r.p.m. It’s connected to an eight-speed automatic transmission and Hyundai’s HTRAC all-wheel-drive system. That system provides an electronic variable-torque-split clutch with active torque distribution between the two wheels.

A new snow mode adjusts torque split from front to back and side-to-side to maximize whatever traction may be available. As well, where once there was a competition to provide as many cupholders as possible, today’s rivalry seems to be about how many USB charging ports you can provide. They’re everywhere: on the console, on the front seat back (for middle-row passengers) and it the third row.

Safe exit is an extension of both cross-traffic and blind-spot alert: it senses when an object is in jeopardy of striking a door — such as a cyclist passing from the rear — and prevents that door from opening. Rear passenger alert also seeks to avoid child deaths due to abandonment in cars on hot days: it uses ultrasound to detect rear-seat movement and first alerts the driver to check the rear seat when turning off the car. If that alert goes unheeded and the system detects movement after the car has been locked, it not only honks the horn but also sends an alert to the driver’s smartphone using Hyundai’s BlueLink connectivity system.

That BlueLink system provides for remote starting with climate control, car finder, remote unlock and lock and diagnostic tools. The system comes free for five years and uses the driver’s smartphone as an interface.

The 2020 Hyundai Palisade will be available in summer of 2019 in Hyundai dealers across Canada. There’s a Freddy Cannon joke in here somewhere, I just can’t think of one. Kelly Taylor
Kelly Taylor has been writing about cars since 2000. His favourite ride has been the Audi R8 from Thunder Bay to Winnipeg, where he nearly traded the car for a Ford Ranger, a Greyhound Bus and the Blue Heron Gift Store in Kenora, Ont.
FILED UNDER:
HyundaiAuto NewsHyundai News

If a 2020 Hyundai SUV is on your radar, know the difference between all 5: Venue, Kona, Tucson, Santa Fe & Palisade. We profile each with photos & features.
Read more
SUV and Crossover Reviews

The N brand launched in Europe with the i30 hatchback and comes to North America with the mechanically similar Veloster N, now in its 2nd-generation.
Read more
Hyundai

A new Hyundai hybrid hits the scene. We review the 2018 Ioniq Electric Plus - a middle ground between the EV and the standard hybrid car.
Read more
Hatchback & Wagon Reviews

The 2017 Ioniq Electric Vehicle was developed from the ground up with electric propulsion at its core. We review Hyundai's new EV hatch.
Read more
Hatchback & Wagon Reviews

Hyundai's 2018 Elantra gets an overhaul & sculpted redesign for 2018, but it's the Elantra GT Sport hatch with 6-speed manual setting it apart.
Read more
Hyundai

Race-ready and driver-focused, the badass RN30 Concept hatchback is a Hyundai race car we wish would happen, based on the European i30 model.
Read more
2017 SUV and Crossover Reviews

The 2017 Santa Fe is easy to like for its combination of interior space and easygoing over-the-road feel, though the Sport moniker may be a little misplaced on this well-rounded SUV.
Read more
Car Reviews