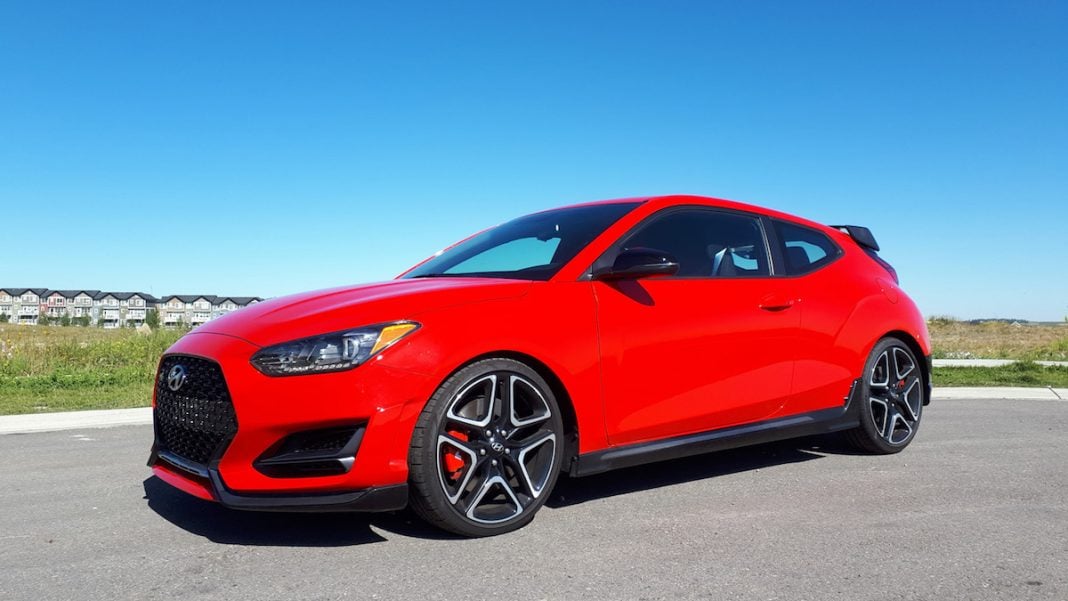 Hyundai says it’s now entered the next phase of its development. The value-for-money startup brand of the 1980s has since added quality and a degree of style to its lineup, which is now a match for anyone in the mainstream auto market. Now comes a dedicated performance sub-brand – Hyundai N.

The N represents Namyang, Hyundai’s Korean R&D headquarters, and nods to the Nürburgring, where all N models are honed. The street-car brand has been backed by a motorsport presence, too, with Hyundai N-badged models winning in World Rally and TCR touring car competition over the past couple of years.

The N brand launched in Europe with the i30 hatchback and comes to North America with the mechanically similar Veloster N, based on the quirky three-door coupe that’s now in its second generation.

Shopping for a Veloster N is a simple process in Canada, where all equipment comes as standard for our test car’s retail price of C$34,999.

In the US, the base price is US$27,400. A Performance Package (US$2,100) adds an electronically controlled limited-slip differential (e-LSD – branded as the ‘N Corner Carving Differential’), a variable exhaust valve system, a power upgrade from 250 HP to 275, and bigger brakes. The standard, 18in alloys and Michelin Pilot Super Sport tires are swapped for 19in items with 235/35 Pirelli P Zeros.

The Hyundai Veloster is one of the most recognizable cars on the road thanks to its coupe profile and asymmetric three-door configuration, which puts a second door on the passenger side. The second generation updates the formula without messing with the proven look.

For the N model, the Veloster is beefed up with an exclusive front fascia and grille, a diffuser-style rear, bigger exhausts and a tailgate-mounted wing. The overall effect is suitably muscly without being tacky, and a little more restrained than on the Honda Civic Type R.

There are only five available exterior colours: Ignite Flame (red), as on our test car; white; gloss black; matt black (C$1,000); and the N brand’s signature colour, a powdery shade called Performance Blue. The red works well with the black accents on the optional 19in alloys.

As you’d expect, there are performance-car upgrades in the cabin, too. The cloth-covered sports seats draw a great balance between lateral support and everyday comfort, and there’s good knee clearance below the steering column.

The chunky knob atop the gear stick is one of several areas where a dash of that Performance Blue is applied. It contrasts sharply but not entirely successfully with the black that predominates elsewhere.

The central 8in display screen has a new N option, through which the N Custom driving mode can be configured (more on that later) and track-friendly tools such as a lap timer and G-meter can be accessed.

There are infotainment essentials like Android Auto and Apple CarPlay connectivity. There’s an Infinity audio system that wasn’t loud enough for our liking and occasionally dropped the Bluetooth audio connection.

We suspect that most Veloster Ns will have a maximum of two people on board, but the two seats in the back are fine for kids. Access is an issue, though, thanks to the three-door setup. Ironically it also makes life harder for the driver, the longer door being more unwieldy and the seat belt fiddly to grab from its extension bracket and prone to tangling. We’d prefer to see Hyundai drop the gimmick and go two-door or four-door.

At the heart of the Veloster N is a heavily boosted 2-litre I4 that makes 275 HP in its highest-output form, as here. It’s one of a number of key mechanical systems that have been developed specifically developed for the N vehicles and has a very different character to the 1.6-litre turbo in the regular Veloster. Key additions to improve response are a twin-scroll turbocharger, and electronics that regulate boost pressure in Sport and N modes.

The sole transmission choice is one for the purists – a 6-speed manual. Quicker shifts have been targeted by a short-throw stick and a fast-acting clutch. As on the Type R, a rev-matching system can be switched on, independent of driving mode, to blip the throttle on the downshift. That’s a good thing, because we found that the pedal placement didn’t lend itself to easy heel-and-toe downshifts.

The final piece of the special new drivetrain is the e-LSD, which is designed to enable faster, more stable cornering from this FWD vehicle. Unless you’re driving on the best winding roads that North America has to offer, it’s likely only at the track where you’ll feel the benefit.

It’s well worth mentioning the chassis upgrades that Hyundai have implemented to the Veloster N, if for no other reason than they illustrate how seriously the company has taken the task of creating a credible performance car.

Aside from the usual stuff like bigger brakes with better cooling, bigger wheels with stickier tires or firmer damping, Hyundai has made some more fundamental changes. There are new suspension knuckles and hub bearings, front and rear. Geometry improvements are designed to improve traction and reduce torque steer and roll.

The steering is new, too, with power assistance on the rack instead of the column to provide better feedback and a more powerful motor. At 12.2:1, the steering ratio is 9% lower, for a more immediate response.

The final piece of the jigsaw is the adaptive damping system, which successfully keeps things comfortable around town in Normal mode but endows the Veloster N with track-friendly levels of stiffness at a push of the N button.

There’s a satisfying exhaust bark on fire-up, but when you pull away in Normal mode, both engine and exhaust are relatively quiet, which makes the car easier to live with every day and less conspicuous in rush-hour traffic. If you want lots of noise, all of the time, then the variable exhaust valve can be configured to suit.

Maximum torque (260 lb-ft) is available from 1,450rpm, so it doesn’t take much to get the Veloster moving. But that’s not to say that it’s a race car around town. In fact, it’s surprisingly docile unless you really mash the throttle, at which point (in Normal mode) you wait a split second for the turbo to spool up, then off you go. Exhaust note aside, we felt that the noise of the engine itself never really built to much.

There’s a satisfying exhaust bark on fire-up, but when you pull away in Normal mode, both engine and exhaust are relatively quiet, which makes the car easier to live with every day and less conspicuous in rush-hour traffic.

If you’re looking for the full-fat N experience, look no further than N mode, selected via the not-great-looking blue button on the steering wheel. Press once for N mode, again for the configurable N Custom setup.

Sport modes are often entirely superfluous to everyday passenger cars, but we found that the N Custom mode was key to our enjoyment of the Veloster N. Hyundai says that there are no fewer than 1,944 possible combinations by the time you take the adjustability of engine response, rev-matching, e-LSD, exhaust, damping, steering and stability control software into account.

We found a sweet spot with a more responsive throttle and quieter exhaust. The Normal setting is fine for the adaptive damping – which is much too firm for most public road use in Sport+ mode – so we left that where it was. More generally, we found the Veloster N to be surprisingly quiet in the cruise, with rock-solid stability at speed.

We favoured the Normal weighting for the (precise) steering, too. It’s one of the better systems we’ve sampled recently. Not only has it been developed with the enthusiast in mind, but there’s no lane keeping assist intervening to corrupt the feel.

We found nothing in the handling to indicate that you couldn’t have fun at legal speeds, every day. The streets of Calgary aren’t the place to explore limit handling, but we had the opportunity to try the Veloster N at Canadian Tire Motorsport Park during evaluation for the AJAC Canadian Car of the Year Awards.

With the demise of the Focus RS, there are few direct competitors for the Veloster N to contend with. In the mix are the more powerful but more expensive Type R, the Subaru WRX STI and, for now, the VW Golf R, each of which offers something different to its rivals.

If Hyundai had attempted something like this 10 years ago, the result might well have been an underdeveloped, torque-steering mess, but it’s to Hyundai’s credit that the Veloster N avoids obvious pitfalls like a rock-hard low-speed ride and carves a credible niche for itself at the very first attempt. As with the Kia Stinger, with ex-BMW M engineer Albert Biermann on board, perhaps we shouldn’t be surprised.

Ultimately, we prefer the Type R’s characterful engine and slightly more fluid, more flattering driving experience, but the thorough approach that Hyundai has taken to the Veloster N deserves to be rewarded with sales success.