The Stinger announced to the world that Kia can make a great job of just about any car it chooses. Now the new Telluride applies that focus to the heart of the North American market, rather than to a performance niche.

Adopted from a ski resort in Colorado, the Telluride’s name leaves you in no doubt as to whom Kia has in its sights: the adventure-loving modern family, millennial or otherwise, so beloved of marketeers. Three-row, mid-size SUVs are as mainstream as it gets in 2019 and Kia is going head to head with long-established heavyweights like the Ford Explorer, Honda Pilot, Nissan Pathfinder and Toyota Highlander.

Telluride pricing in Canada starts at $44,995 for the EX

The Canadian range starts at C$44,995 for the EX trim, which is around C$16k more than the cheapest Sorento – Kia’s existing, smaller three-row SUV, which continues to be sold.

The lineup rises through our SX test vehicle (C$49,995) to the SX Limited (C$53,995). It’s a simple range and in a refreshing change from some other auto makers, there are no packages on offer either, just practical accessories such as a roof box or cargo tray.

In the US, life is a little more complex, but not much. The range starts with the LX at US$31,690 and rises through the S (20in wheels, captain’s chair second row) and EX (highway driving assist, wireless charging) to the fully loaded SX for US$41,490.

On both sides of the border, all models are powered by the same, 3.8-litre V6 that makes 291 hp. AWD is standard across the range in Canada but a US$2,000 option in the US.

Putting the Telluride SX to the test

Kia is pitching the Telluride at buyers who want more space and more luxury than the Sorento can offer, and the Telluride delivers in both size and style. It’s 200mm (8in) longer, 100mm (4in) wider and 65mm (2.5in) taller than its older sibling and is wrapped in distinctive sheet-metal that cuts a squarer profile than some of its rivals.

There are some interesting styling details, too, notably the orange-tinted, trapezoidal running lights that flank the SX’s hot-stamped, satin chrome grille. It’s not flashy, though. Our test car’s Gravity Grey premium paint (C$200, no extra charge in US) helped the Telluride to an understated look, finished off with the standard, 20in machine-finished alloys (the EX comes with 18s).

The Telluride is well equipped, even in entry-level EX trim. All models get a 10.25-inch multimedia interface with navigation and HD traffic, wireless charging and the now-ubiquitous Apple CarPlay and Android Auto.

Our SX adds a dual sunroof, the excellent new blind-spot view monitor (BVM), which pops a camera view of the blind spot into the instrument cluster when you flick the indicator, a 630W, 12-speaker Harman/Kardon sound system and a 360° camera. Limited adds head-up display, LED taillights, second-row captain’s chairs and Nappa leather – roughly equivalent to the US$2,000 Prestige package in the US.

As per other recent Kias, there are no nasty ergonomic surprises in the dashboard, controls or seating position. Visibility from the comfortable, power-adjustable leather seats is good and the AC and seat ventilation in our SX fired quickly. The swipe-able screen perhaps lacks the last degree of intuition in its operation, but you soon get used to it; we got fed up with the lack of a station list in the Sirius XM interface, though.

More generally, the ambiance is convincingly premium, with the classy wood and satin metal trim on doors and dash a particular highlight. The build quality of our test vehicle was first rate and the doors shut with a solid thud.

Two more new systems, safe exit assist (SEA) and rear occupant alert (ROA), intervene when it’s time to get out. We especially like the way that SEA will prevent the rear door from being opened into passing traffic.

The Kia’s extra size translates well to internal volume. There’s lots of space, everywhere, but most especially in the trunk, which is cavernous with the third row down but still voluminous with it in place – at 601 litres, better than any competitor, according to Kia. Access isn’t compromised by a wannabe coupe roofline, either. We took the Telluride on a camping weekend for four and it swallowed our gear without missing a beat.

Access to the two rearmost seats is via a one-touch tilt-and-slide feature on the side or top of the middle-row seats – a three-seat bench in the case of the SX. The kids reported no issues with third-row space, which is good for adults on shorter trips, too. There is 48mm (1.9in) more headroom back there than in a Sorento, 60mm (2.3in) more hip room and a smidge less legroom.

Third-row occupants get two fast-charge USB ports, a setup mirrored in the middle and the front as well. There are no USB-C ports, but we think that most users will have cables to serve their needs.

The Telluride’s engine runs the Atkinson Cycle for better economy, but the powertrain Kia has chosen – a 3.8-litre V6 and an 8-speed automatic transmission – is otherwise similar in approach to that of segment stalwarts like the Pilot and Pathfinder.

It’s a near-perfect setup for this type of vehicle and Kia has executed it beautifully. The V6 is adequately powerful, torquey when you need it to be (up to 262 lb-ft @ 5,200rpm), smooth and relaxed, but thankfully without the lazy throttle response that blights V6 Hondas. The auto ’box is impressive, too – you barely notice it managing the power, which is exactly how it should be. Official combined fuel economy is right with the class average at 11.2L/100km (21mpg).

The V6 is adequately powerful, torquey when you need it to be (up to 262 lb-ft @ 5,200rpm), smooth and relaxed, but thankfully without the lazy throttle response that blights V6 Hondas.

The relaxed cruise behaviour is enhanced by the new generation of driver-assistance systems fitted to the Telluride, which puts Kia back up among the best manufacturers in this area. LFA (lane following assist) does a good job of keeping you centred in the lane with little steering intervention and RCCA (rear cross-traffic avoidance assist) felt like the furthest-seeing system we’ve tried when it came to spotting passing cars when reversing.

Electronics aside, the Telluride manages the dynamic basics well. Even on 20in rims, the ride is as hushed and composed as anything we’ve driven in this class. The steering is accurate and its weighting well-judged; as with the Telluride’s transmission, brakes and roll control, you don’t really notice it, which means the tuning is spot-on for the job it’s designed to do.

We didn’t take the Telluride onto anything more challenging than a gravel road, but there are snow, mud and sand modes to help you out off-road, alongside the familiar (and likely to be seldom used) Eco and Sport settings.

We didn’t tow anything, either, but the Telluride is good for 5,000 lb. In the US, a US$795 towing package adds self-leveling rear suspension and a tow hitch. In Canada, the self-leveling suspension is only available on the SX Limited, where it’s standard. In both markets, Kia’s new trailer sway assist (TSA) adds to the rapidly thickening alphabet soup of driver-assistance technologies.

Takeaway: Is Kia’s new 3-row SUV worth it?

When Land Rover engineers were benchmarking vehicles during the development of the Discovery Sport, they took a close look at the contemporary Kia Sorento for its clever packaging of the third-row seats. Five years on from the Disco Sport’s debut, Kia has premium ambitions of its own – ambitions that are convincingly fulfilled in the Telluride. Luxury lovers might still go for a Land Rover, BMW or other brand over a Kia, but they’re missing a treat.

We got as many favourable comments and questions from passers-by about the Telluride as we have for any car we’ve tested in recent memory. It’s an unscientific test, but it shows not only that it looks the part, but that buyers are receptive to the concept of Kia taking on more familiar nameplates in this segment.

With strengths across the board and few weak spots, the Telluride is now the SUV to beat among the three-row mid-sizers, in this reviewer’s opinion. It’s worth noting however that rivals from Nissan, Ford and Toyota are all long in the tooth and we already know that the 2020 Explorer and Highlander will both up their respective premium games. Will the Telluride see off the challenge?

For more SUVs including reviews and news, check out our Buyer’s Guide here.

Photos of the Telluride SX 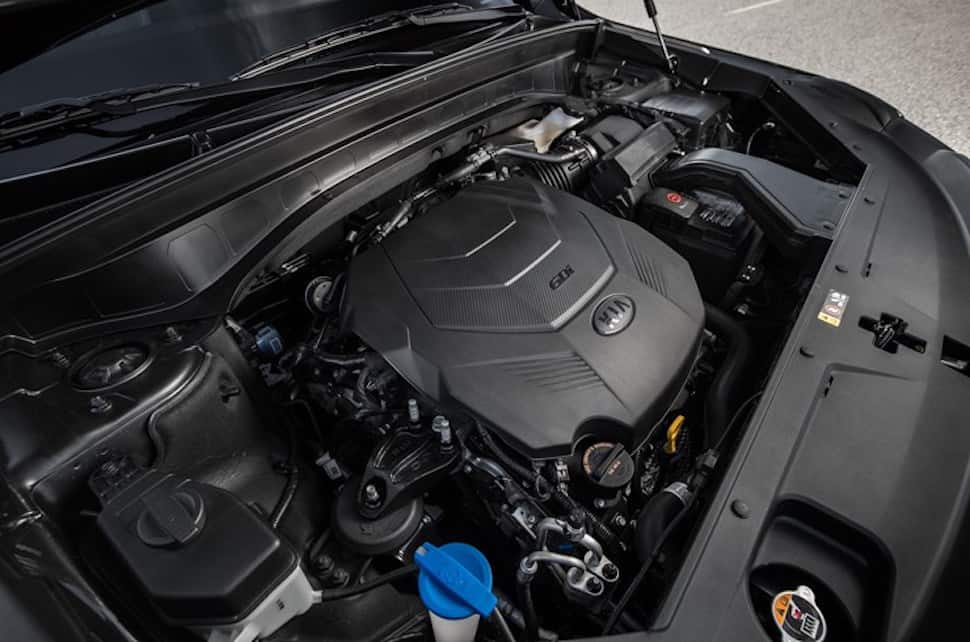 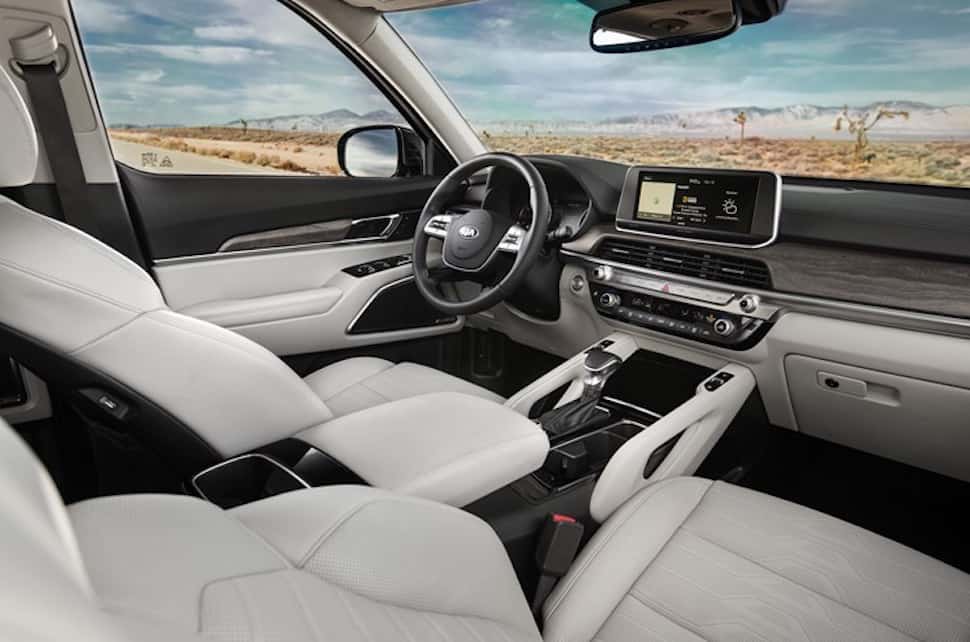 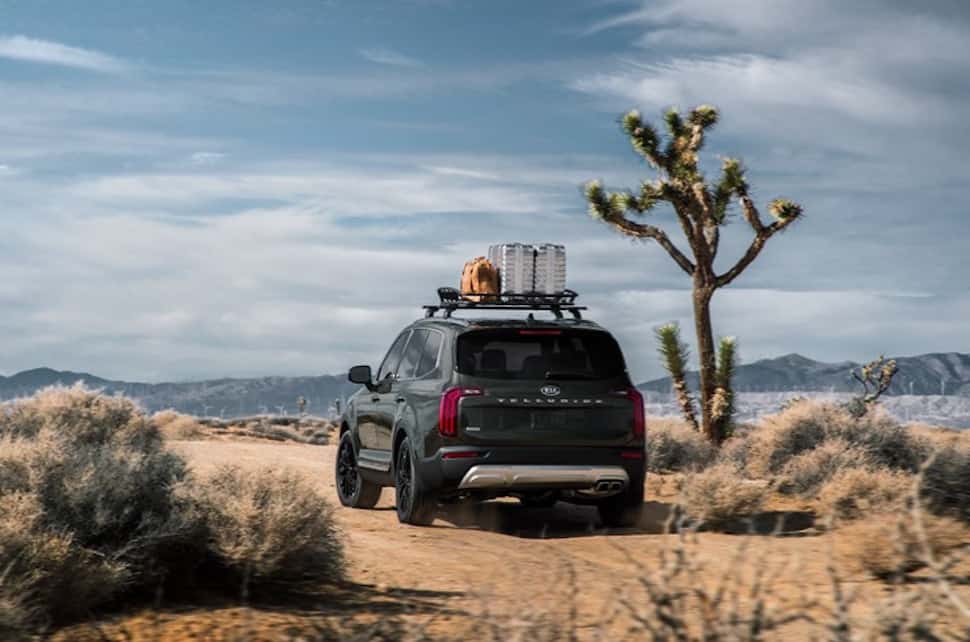 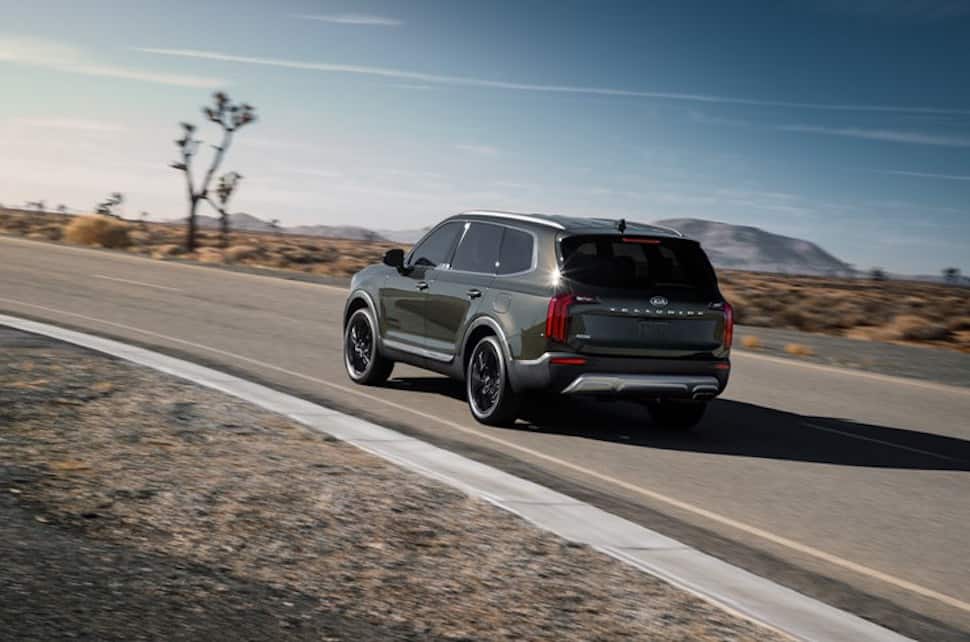