Only the Fittest Will Survive.

It’s now or never for the mid-size sedan. The midlife identity crisis-riddled segment is nothing short of being on the wrong side of history – pushed out by the SUVs that buyers prefer over them.

But it hasn’t faded away just yet. And to fight, those who want to beat the trend will have to be extremely fit to survive.

If the Optima was amongst the “accountant’s favourites” in the car lot, alongside the Chevrolet Malibu and the Hyundai Sonata and other sedans that scream midlife crisis in khakis, it wasn’t spared by Kia’s new way of seeing things.

The K5 is the newest addition to the Kia family, replacing the low-flavour Optima and making a statement that the Korean manufacturer is committed to offer something more to those who favour the four-door style.

The GT-Line’s Looks: It’s all about that war face

The seduction attempt starts when one lays eyes on the front part of the K5, where a complex grille is laid out between two z-shaped headlights. On the side, the coupe-like sweep borrowed from German luxury counterparts and the wide, band-like taillight in the rear are all part of the new “angry” sedan 101 cookbook.

When unveiling the K5, Kia shamelessly dug into the National Geographic lingo to describe the K5’s attitude, with lines like “tiger nose” and “shark skin grille.” She’s a beaut!

But the strategy will probably pay off; if one is going to be small and it has to fight against SUVs, one must look angry.

On the road, my 1.6-litre powered GT-Line could have used a little bit more power. And the 8-speed gearbox wasn’t as responsive from a standstill as I thought it would’ve compared to other recent Kia products – there’s still that little hesitation when plowing your foot into the gas pedal. However, once everything is underway, it never looks for a gear and delivers highway pickups swiftly. Compared to the old Optima’s comparative base engine, the responsiveness and the overall performance was brought up quite a bit!

Handling, on the other hand, is nothing less than majestic for a mainstream mid-size sedan. The overall experience is precise and surgical with an ideal driving position and no weird A-Pillar blind spot. The Kia K5 and brake and turn, but it can also cruise at high speeds with great stability.

Inside the new K5 GT-Line sedan: A surprisingly zen interior

Kia is brushing up the insides of every single of its vehicles in a way no one else is. The designers went above and beyond to make this interior flirt with compact luxury sedans in terms of finishes.

Being the total opposite of the outside in terms of styling, this interior gives up the attitude for a calming and tasteful mix of textures and colours and with old-style switches and levers, someone put a lot of time in curating this environment.

The 10.25″ screen (standard on GT-Line and GT), which broadcasts the not-so-easy-to-use Kia infotainment system is at the top of the dashboard. Unlike other simpler systems, the commands can be tricky to understand at first, but it comes with many features, and a few weeks in the car will suffice to get the hang of it.

Takeaway: is Kia’s new 4-door worth it?

The K5 is the mid-30s guy who was once overweight and now is training every day – and bragging about it on social media. The mid-size sedan is being dragged away kicking and screaming, but this one won’t go without a fight.

Although I would’ve appreciated testing the more powerful 2.5-litre turbo engine to enjoy the ponies that belong with the K5’s look, I found that the package was quite well rounded in terms of handling, comfort, fit and finish. In the GT form, this could certainly attract some premium sedan buyers away from the Germans – if these buyers would only stop and look at the K5, test-drive it and get the fact that it’s a Kia out of their heads.

If you’re shopping for a 4-door car, check out all our sedan reviews here. 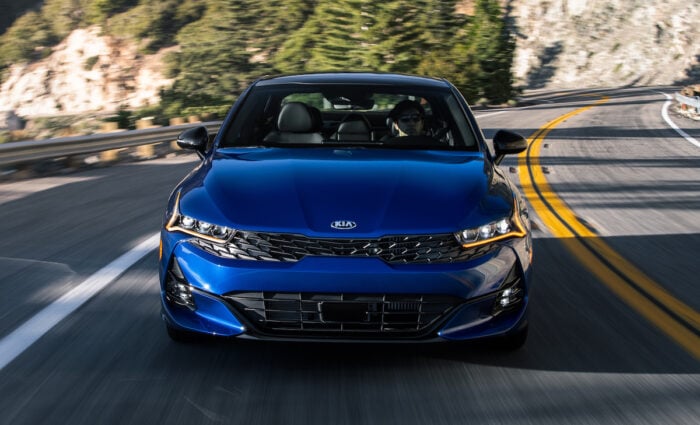 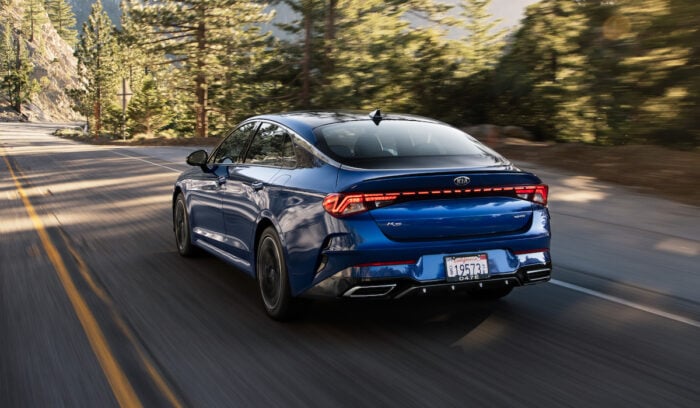 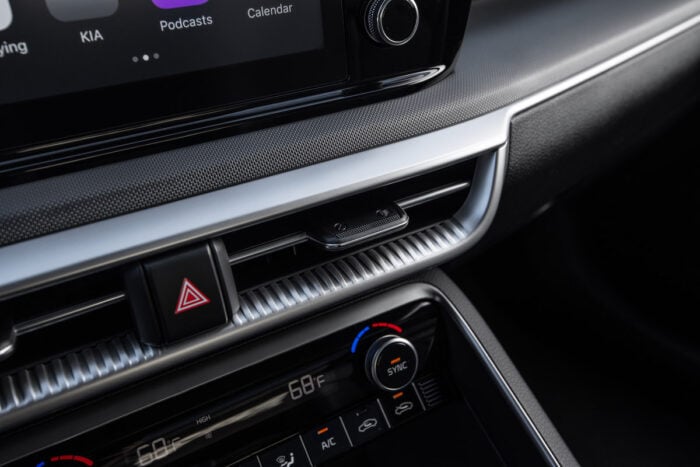